It is a rare event in American politics when a major political party dies.

Such an occurrence has not happened in more than 160 years, when the Whig Party split due to a division between its pro-slavery and anti-slavery wings. The Republican Party formed in 1854 and quickly supplanted the Whigs, who had elected two presidents in the 1840s but had all but gone out of business by 1856.

In most nations with democratic systems, political parties don’t survive nearly as long as America’s Republicans and Democrats. And lately, the Democratic Party has been showing its age. The party founded by Andrew Jackson in 1828 is in such a decrepit condition that it might be nearing its final collapse.

Team Blue’s feeble condition goes beyond the festering wound left from the 2016 nominating contest that once again reared its ugly head last week. The ongoing civil war between the “Hillary wing” and the “Bernie wing” may be the death rattle for a party that has been slowly, painfully dying for the last 50 years.

The party’s descent began in 1968 when Republicans won their first of five presidential victories over the next six elections, enabling them to wrest control of the nation’s courts away from liberals, who had dominated American jurisprudence for a generation. The Democrats’ only victory over the next 24 years was in 1976 when Jimmy Carter barely squeaked out a win over unpopular incumbent Gerald Ford.

Even as Democrats broke their presidential hex in the 1990s, they lost their grip on Congress and the state governments, which they had dominated since FDR was in office. Starting with their midterm wipeout in 1994, Democrats have steadily fallen to their lowest point since the Great Depression. With the exceptions of the presidential victories of Bill Clinton and Barack Obama, and a brief resurgence into the congressional majority at the tail end of George W. Bush’s presidency, the party has consistently gotten mauled at the polls for a generation at both the federal and the state levels.

For nearly a quarter of a century, Democrats have taken electoral drubbing after electoral drubbing despite the fact that the Republican Party is less favorably viewed than the Democrats on almost every imaginable issue. Democrats currently control only 15 out of 50 governorships, 31 out of 99 state legislative chambers, and none of the levers of power in Washington, D.C. When the public prefers your party on almost every issue but you’re still getting crushed across the country, it speaks volumes about the party’s health and vitality. How can such an inept organization survive?

The Democratic Party’s death blow may be the ongoing feud between Bernie Sanders supporters and “regular Democrats,” which has kept the party divided for nearly two years. Only Republicans’ ineptitude has provided relief for Democrats.

The battle between these two wings has no end in sight, and allegations by former DNC Chair Donna Brazile of improprieties in the 2016 nominating process tore those wounds wide open again—as the party was attempting to win important elections in Virginia and New Jersey.

At a time when the astounding unpopularity of both the Republican president and Republican-controlled Congress should give Democrats ample opportunities for electoral successes, the gang that can’t shoot straight is shooting itself squarely in the foot. Beyond the ongoing intramural squabble, it is clear the party simply doesn’t know how to win elections. The Democrats’ rare electoral victories over the past couple of decades have been personal triumphs by charismatic candidates—such as Bill Clinton and Barack Obama—who built their own electoral organizations rather than relying on the sclerotic, brain-dead party establishment that has otherwise failed consistently at the ballot box for the last five decades.

And the party’s leadership and consultant classes, neither of which has demonstrated any aptitude for winning elections, cling stubbornly to their perches, crushing the party’s chances of developing younger, more innovative leaders. Democrats’ seed corn is wasting away in the root cellar while the party’s tired, washed-up leaders hang on to power like Politburo potentates.

But let’s not pin all the blame on the party establishment. The Democrats’ rank and file members largely don’t know what they’re doing, either. Too many liberals are still utilizing 1960s-era tactics, such as rallies and marches, that no longer move the political needle. And many progressives fail to understand the supreme importance of voting, particularly in non-presidential elections. This has enabled Republicans to build their bench while local and state-level Democratic parties have floundered. For example, in the nation’s key swing region, the Midwest, Republicans have full control of every state but two (Illinois and Minnesota), and partial control in both of those; heading into 2018 they hold the Illinois governorship and both chambers of the Minnesota legislature. It is a chicken-and-egg problem. Democrats’ failures to win at the local level prevent them from developing the political talent that would be needed to gain those victories.

So now, Democrats are paralyzed, clueless and possibly on the verge of fumbling a historic opportunity to get back on top presented by an unpopular president and an even more unpopular Congress. With full control of only six out of 50 state governments, the party is arguably in as dire of a condition as the Whigs were when they went out of business in the 1850s. The Whigs held nine of 30 governorships four years before they collapsed, which at 30 percent of the total was exactly on par with the Democrats’ 30 percent share of governorships today.

It’s possible that Donald Trump and congressional Republicans—who flounder at governing as badly as Democrats do at campaigning—may do for Democrats what they are incapable of doing for themselves. The GOP, battling its own problems, could keep the Democrats on life support for the next few years. But right now, Democrats are pulling the plug on themselves, and even the ineptitude of their opponents might not save Team Blue from a sorry fate. 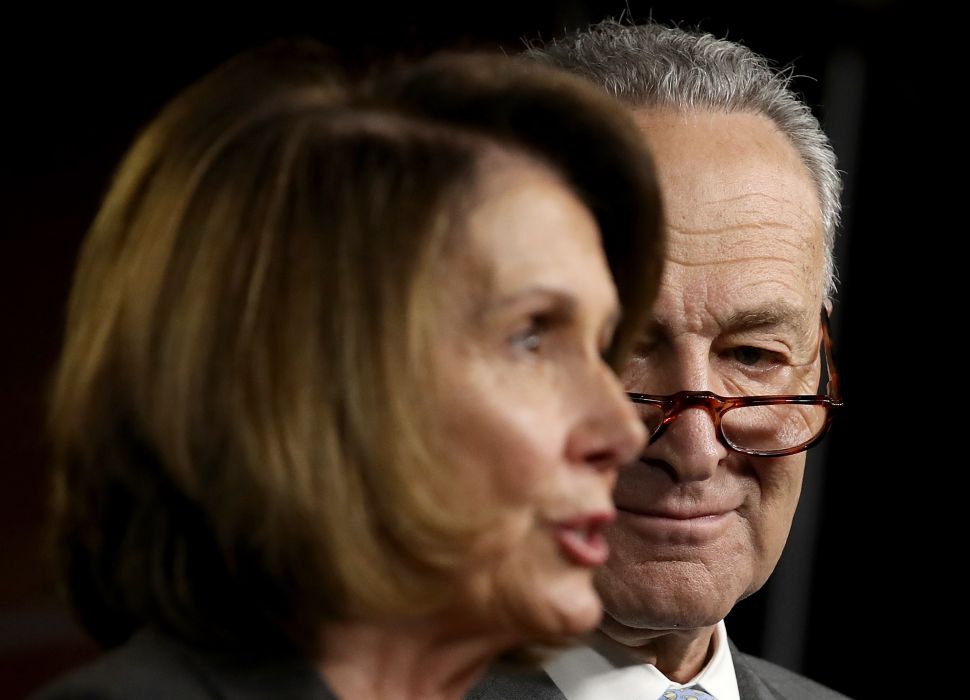