For many years, Batman and the Joker’s mystifying chemistry has been a source of fascination for fans. There’s nothing that pairs bats with clowns throughout history, but somehow they go together like peanut butter and jelly. The idea that the two need each other has been a theme in Batman works ranging from Christopher Nolan’s The Dark Knight to the more recent LEGO Batman. In one episode of the superhero story, Joker refers to himself and his nemesis as “two sides of the same coin,” suggesting a closeness not entirely palatable to our caped hero.

Writer James Tynion IV takes that possibility to its logical endpoint in DC Comics’ new release The Batman Who Laughs. Set in the separate continuity of Earth-22, the book is a tie-in to DC’s current Dark Nights: Metal crossover that explores a dark chain of connected universes that exist “underneath” the DC universe. But like any good tie-in, the book works well as a standalone issue. The Batman Who Laughs is a what-if, explained by the title character during a tarot reading that is likely an homage to the card game that kicks off Alan Moore’s influential Joker tale The Killing Joke. The title is also an homage to The Man Who Laughs, a 1928 horror flick that inspired the Joker’s creation.

But back to the plot. Here on Earth-22, the original clown prince has died. The chemicals that made him the Joker have eroded his mind and killed him. The catch is that his last breath spreads his disease, infecting the dark knight with a nanotoxin that transfers Joker’s madness into Bruce’s body, birthing a new supervillain—a Joker with Batman’s talent for “grand scheme of things” planning. While the Joker was mostly interested in the chaotic artistry of his various plots with no broader goals in mind, Batman is a methodical detective who aspires for a crime free world. When those ambitions are flipped upside down he makes for a brutally goal-oriented Joker.

Fusion characters are not new in superhero land (see Spider-Gwen or Gogeta). Marvel’s Onslaught, a combination of Professor X and Magneto, was used as a deus ex machina who moved the Avengers and Fantastic Four to an alternate earth so Marvel could farm out those titles to other studios hungry for creative freedom. People often see Onslaught as a symbol of Marvel’s 1996 bankruptcy woes, but he’s also an impressive character; his magnetic and psychic abilities make him formidable in both physical and mental realms. Much like Onslaught, the Batman Who Laughs works because the two fused characters have a decade-long relationship of antagonism without which neither character could efficiently function—so much so that they almost seem at ease in the same body.

This book also works because it leans into some of Batman’s more troubling tendencies. While the bevy of youngsters that have wormed their way into the Batcave over the years have always done so against Batman’s wishes, he has ultimately been permissive of the team of kid soldiers fighting on his behalf. Here, the Batfamily has been further debased, with Batman keeping a pack of demonic joker-faced Robins as pets on chainlink leashes.

Tynion takes this opportunity to examine the flaws in some of Batman’s more cynical defensive strategies. The superhero’s need to stockpile and study the weaponry of DC’s villains, which Superman had encouraged him to destroy, is part of what  leads to the Justice League’s downfall. Many comics have explored the long-kept tabs Batman has on his fellow Justice Leaguers’ weaknesses, in the event that they should turn against the world. Tynion exposes Bruce as the character sees himself: superior to all others, an infallible pinnacle of law. In trusting only himself, the caped crusader has doomed everyone. The Batman Who Laughs is disappointed that he only gets to murder the members of  the Justice League once. “Do you realize how many ways I know how to kill you?” he muses to a bloody and blinded Clark Kent.

The Batman Who Laughs first appears as slinky, red-lipped, clad in a bat suit with green highlights. But as the story progresses, he eventually evolves into a sadomasochistic monstrosity with a bloody mouth, clawed fingers, a plethora of black leather straps and a spiky dog collar covering his eyes. This leering bat god is the creature that graces this comic’s metallic foil cover alongside his pet Robins, explosively rendered by Jason Fabok and Brad Anderson in one of the years most memorable comic book images. He’s very much his own character, more reminiscent of the cenobite demons in Clive Barker’s Hellraiser than any clown or bat. Like the cenobites, Tynion’s star monstrosity has an insatiable taste for pain, making this one of the most unsettling and entertaining comic stories of the year. Looking forward to see what DC does with the character as he merges into the storyline of Dark Nights: Metal. 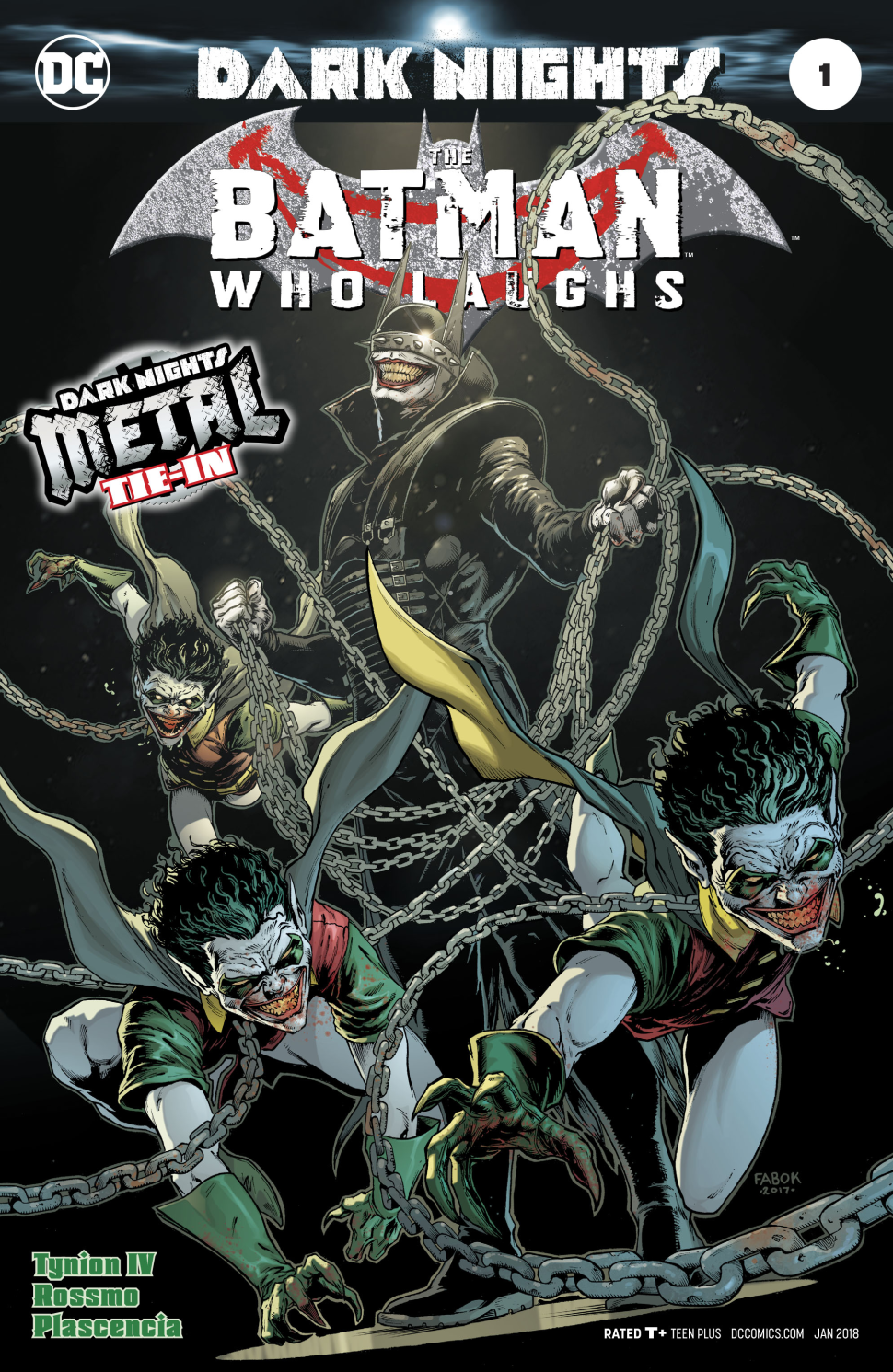