Reporters having secret discussions in phone booths and banging on typewriters instead of tweeting? Yep, looks like another journalism period piece.

But the latest entry in this fertile genre has a better pedigree than most. The Post is directed by Steven Spielberg and stars Meryl Streep and Tom Hanks as Katherine Graham and Ben Bradlee, the publisher and executive editor of the Washington Post. In particular, it details their quest to publish the so-called “Pentagon Papers.”

But wait, students of journalistic history might ask—weren’t the Pentagon Papers published by The New York Times? Yes, and that’s only the beginning of the story.

The Pentagon Papers were highly classified documents which detailed U.S. involvement in Vietnam from 1945 (well before the Vietnam War) to 1967. These files, compiled by the Department of Defense, also revealed secret American bombing raids in Cambodia and Laos.

Nobody outside of government knew about the Pentagon Papers until 1971, when activist Daniel Ellsberg began leaking them to the press. The Times was the first outlet to make the documents public, publishing a 7,000-word excerpt on the front page.

President Richard Nixon responded to the leak with a court order which barred the Times from publishing any more classified information.

That’s where the Post came in. Graham, who took over as publisher after her husband committed suicide, hired Bradlee and gave him and his staff free rein to publish the papers, as well as the details of the Watergate break-in a few years later. (The Pentagon Papers were fully declassified in 2011).

It wasn’t an easy decision—Graham and Bradlee risked prison time and were threatened by Nixon’s administration. Graham, who’s made out to be a caustic realist, warns Bradlee in the trailer that “We can’t hold them accountable if we don’t have a newspaper.” But as Bradlee (who looks to be another one of Hanks’ honorable characters) says, “The way they lied, those days have to be over.”

The Pentagon Papers story has many parallels to today, when another presidential administration warns of “fake news” and calls journalists “the enemy of the American people.” The Post has also been at the center of this story, with great scoops like David Fahrenthold’s shoe-leather reporting about the Trump Foundation’s philanthropy (or lack thereof).

Spielberg’s film also tackles gender inequity issues like those that dogged Hillary Clinton—Graham faced rampant sexism as the Post‘s first female publisher. One co-worker in the trailer tells her that “she doesn’t have the resolve to make the tough choices.”

In light of all this, it’s not a big surprise that The Post was greenlit right before the 2016 election. The film was co-written by Liz Hannah and Josh Singer, who won an Oscar for Spotlight, and surely hopes to follow that film’s path to Oscar glory. 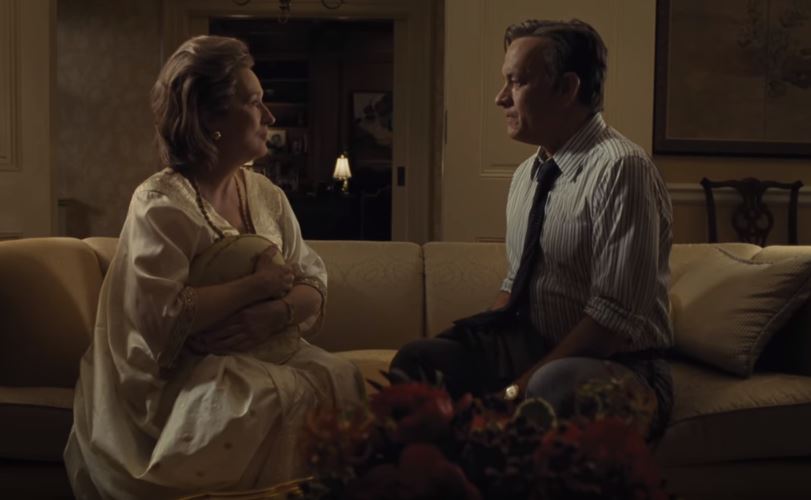