When I picked up my copy of Katie O’Neill’s The Tea Dragon Society from the comic shop, I could’ve sworn it smelled good—like a gentle foreign brew. The picnic on its cover was immediately relaxing, as were its pulpy matte pages that soak up an earthy color palette. That’s is the magic of this book, it is a delightful reprieve. In a fantasy genre rife with death and destruction, The Tea Dragon Society, much like the tea dragons within, seems designed to calm.

The setting for The Tea Dragon Society is a world where some dragons have been domesticated and bred down to small sizes. These dragons produce tea leaves around their horns and ears which can be harvested to produce tea. The puppyish, chamomile tea dragons are the easiest for new owners to care for, while the lemuresque peppermint tea dragons can be quite a handful. “Usually companion animals in fantasy are wise, loyal, a window into the human’s soul,” O’Neill told Observer via e-mail. “Tea Dragons are none of that, in fact they’re quite needy and difficult.” The tea dragons do, however, have the power to share memories of their owners with others through their tea. “I think the idea of bonding with a creature is so lovely, so I wanted them to be able to share something special,” O’Neill explained.

With proper care, tea dragons can survive for over a thousand years, usually outliving several owners. It’s more difficult for some breeds than others to adapt to a new owner after the previous one has passed. Because the skills needed to work with tea dragons are highly specialized, tea dragon owners form scholarly associations known as tea dragon societies. The four members profiled in this one include a young blacksmith named Greta, the ruminant Minette (who struggles with memory loss) and a gay couple: the swordsman Erik and the wizard Hesekiel, who’ve taken a break from adventuring ever since a battle left Erik wheelchair bound. O’Neill describes the willowy, fox-like Hesekiel as a Sylke, a species known for their spellwork and hospitality, but even some of the more humanoid characters like Greta have horns or antlers. “Animal characteristics are a fun way to express elements of a character,” O’Neill said.  The book’s definition of humanity seems almost as queer as the relationships. Still, most of the very human characters don’t read as white. Queer, differently abled, and people of color—with less capable writers these would just seem like identity boxes being ticked off, but O’Neill introduces these elements into the plot with ease. It doesn’t feel like she’s trying to out-woke anybody.

O’Neill is part of an emerging genre of comic book artists who feel that violence doesn’t have to be at the center of science fiction and fantasy stories. Most of these comics’ creators are female and, strangely enough, named Kate. Kate Leth’s work on Marvel’s Patsy Walker A.K.A. Hellcat! Saw a focus on the feline heroine’s friendships, and returned Patsy to her roots in romance comics. Kate Sheridan’s comic The Fallow Time follows a Dungeon and Dragons party on a relaxing day off. Similarly, Katie O’Neill’s The Tea Dragon Society is mostly about people getting to know each other and harvesting tea from little critters. While there are moments of combat in all three of these stories, it’s not the focus. Many in this new genre also rely on web platforms like Patreon to get the word out about their work. The Tea Dragon Society was first released for free online. “I love knowing that readers of all ages and financial situations can enjoy the story,” explained O’Neill. “And as the increasing number of successful Kickstarters and publishers picking up webcomics proves, having the story online for free is no barrier to sales.”

If I have one complaint about The Tea Dragon Society, it’s that it’s too short, but this seems mostly due to the nature of its format; While I was initially hesitant to suggest that The Tea Dragon Society resembles a children’s book, O’Neill is proud of that label.  The book is a sort of hybrid between that format and a graphic novel and is appropriate for all ages. She cites the Golden Books as an influence, and the binding here is quite similar to a classic children’s title. As fellow comic scribe Hope Larson writes on the back of the book, The Tea Dragon Society is “just the right length to pair with a cup of tea.”

The Tea Dragon Society is available from Oni Press. 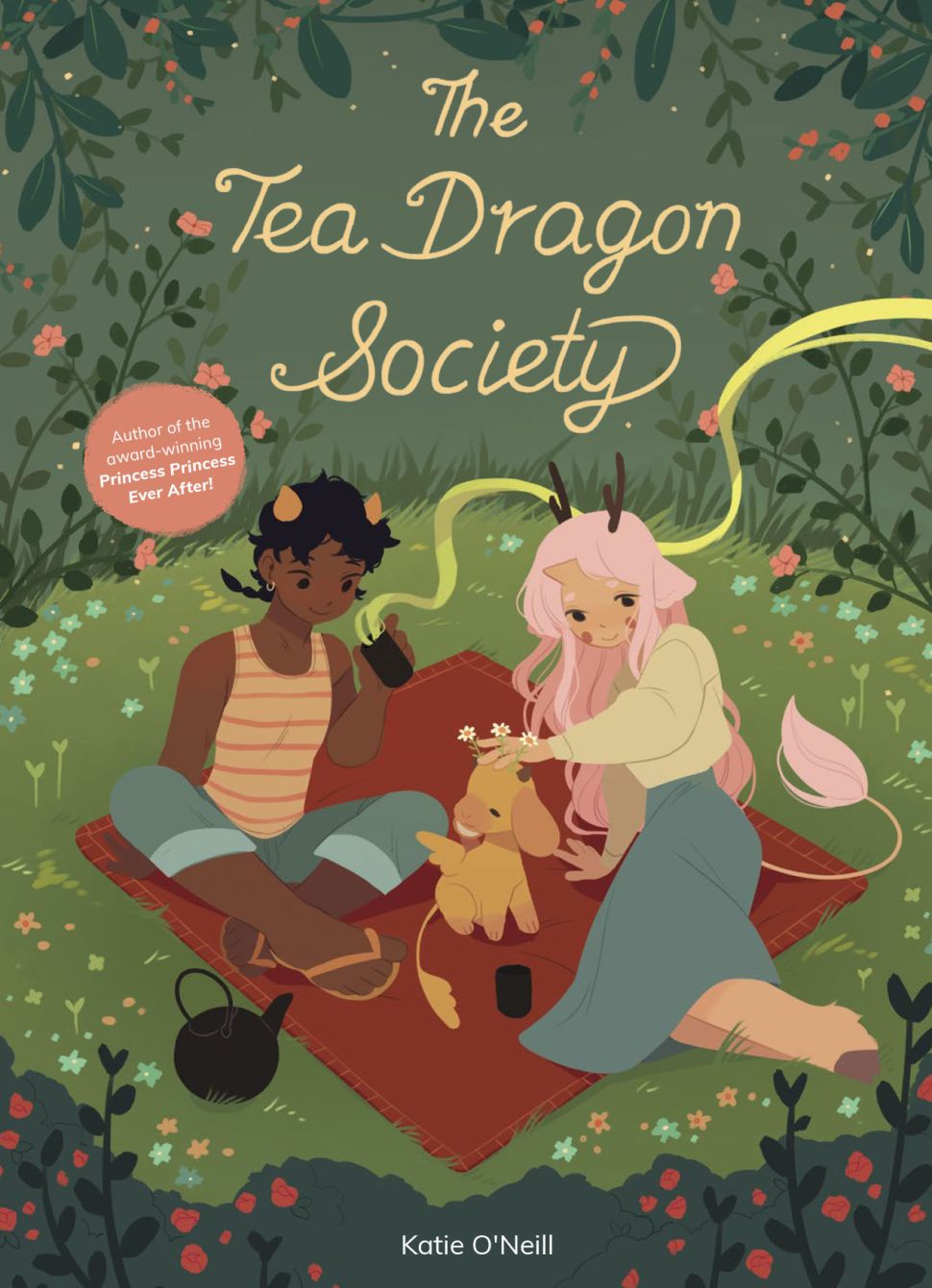