There’s no doubt that New Yorkers know how to eat. Residents of the city that never sleep are obviously able to find the best food at all hours and thanks to social media, New Yorkers can now Tweet shamelessly about their boozy brunches and late night bites—hashtags optional. So, in honor of the city with the biggest appetite, Twitter has released their list of the ten most Tweeted about restaurants of 2017. The list includes a range of low-key cafés, fusion style eats and restaurants that only serve Insta-worthy plates.

Ranking at number one is the recently revived Union Square Cafe. The contemporary American restaurant is heralded for its hospitality and creative dishes, such as the Wine and Ricotta Gnocchi, which happens to be one of their most mentioned menu items on Twitter, as well. The restaurant was given a three star rating by the New York Times back in April, stating that the atmosphere is like “the offspring of a mixed marriage between a trattoria and a bistro.” Next time you go, tell them @Observer sent you—then use all 280 characters to brag to your followers.

If you’re seeking a meal that’s mostly focused on an unforgettable photo opp, look no further than the stylized shakes and food porn-esque burgers at the second most tweeted about restaurant on the list, Black Tap. The classic burger joint with five locations across Manhattan is “modernized for the Instagram age” as stated on their bio page. Their milkshakes are straight out of Willy Wonka and the Chocolate Factory with a myriad of flavors, mixtures, frosted rims and towering with toppings. What else would you expect from a $15 milkshake?

IM BRINGING SEXY BACK🍒 to celebrate our crazy shake anniversary, the CAKE SHAKE shake will be sold in stores 11/12-11/13 only #winner pic.twitter.com/7tH2BwvmJs

Also on the most Tweeted of 2017 list are Russ & Daughters (@LoxPopuli), Peter Luger (which doesn’t even have a Twitter account), Le Coucou (@LeCoucou_NYC), Blue Hill (@bluehillfarm), MIMI, Marta (@martamanhattan), Fuku and Momofuku, both of Momofuku Group (@momofuku).

mayan #prawns have made their way onto the menu at noodle bar ny―served on a carrot puree with orange and sichuan peppercorns. pic.twitter.com/Z3LRntE9IE

To compliment the list of restaurants, Twitter also revealed that New Yorkers Tweet about coffee and food delivery…a lot. The most popular time of day to Tweet about coffee is 10 a.m., and the most complaints about waiting for food to be delivered (see #sohungry for proof) are Tweeted out around 8 p.m. Also, since we’re in the era of the emoji they also included a list of the most used food emojis of 2017:

Fresh from the Twitter oven, here are the 10 most Tweeted food emojis in 2017.

But it’s not just New Yorkers who are constantly thinking about food; each month more than 100 million tweets about food are sent out, from every corner of the globe. On that note, GTG, #sohungry

hanging at @Twitter offices today with spicy fried chicken sliders. thanks for the invite, @TwitterFood. pic.twitter.com/N7ABG7seHl 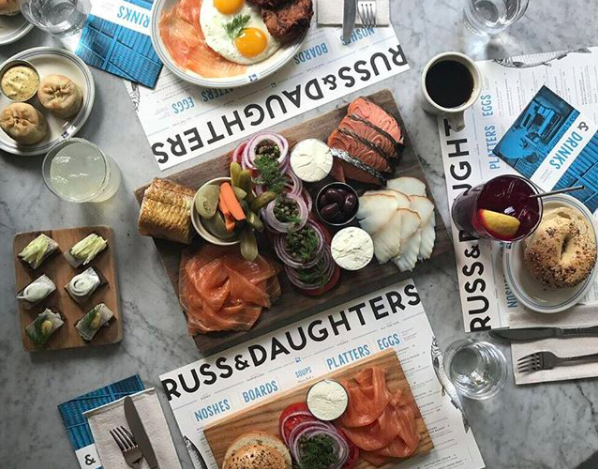