The Metropolitan Transportation Authority has named Andy Byford, the current CEO of the Toronto Transit Commission, to lead the New York City Transit as the city grapples with a worsening subway crisis.

In January, Byford — who has served as CEO of the Toronto Transit Commission for five years — will take over as president of NYC Transit, an MTA agency that oversees for New York City subways, buses, paratransit services and the Staten Island Railway. At NYC Transit, Byford will be tasked with implementing the subway turnaround plan launched by MTA Chairman Joseph Lhota at the end of July.

The MTA said that it selected Byford after an extensive and international search. He will replace the most recent permanent president for NYC Transit, Veronique Hakim, who currently serves as the MTA’s managing director.

“Our transit system is the backbone of the world’s greatest city and having someone of Andy’s caliber to lead it will help immensely, particularly when it comes to implementing the Subway Action Plan that we launched this summer,” Lhota said in a statement. “In order to truly stabilize, modernize and improve our transit system, we needed a leader who has done this work at world-class systems and Andy’s successes in Toronto are evidence that he is up to this critically important task.”

At the Toronto Transit Commission, Byford oversaw several key initiatives, including the development of a corporate plan that sought to modernize the TTC.

Under his leadership, the number of subway delays decreased, customer satisfaction reached unprecedented levels and a number of significant projects moved forward, including the phased introduction of a modern signal system and the imminent completion of a major subway line extension, according to the MTA.

This year, the American Public Transportation Association named the TTC as its “Outstanding Transit System of the Year.”

In June, Byford was a member of a panel that shared international best practices at the MTA Genius Transit Challenge, where he discussed his efforts to update and refine Toronto’s subway system.

“New York City’s public transit system has driven New York City to become the bustling, successful metropolis that it is, and it’s an honor to be trusted with the huge responsibility to modernize the system and bring it to the high levels of performance and customer service that New Yorkers truly deserve and rightfully expect,” Byford said in a statement. “I look forward to working with my new colleagues and all the employees of New York City Transit and the MTA, and, most importantly, our customers.”

Byford started his transit career at London Underground where, over a 14-year period, he rose to the position of general manager of three of its busiest subway lines. He spearheaded increases in customer satisfaction and operational performance at the main line UK railway system and was the CEO of Australia’s largest transit system in Sydney.

A native of the United Kingdom, Byford has an honors degree from the University of Leicester.

The appointment comes as Mayor Bill de Blasio and Gov. Andrew Cuomo spar over who should fund the $836 million first phase of Lhota’s plan. The governor has committed to funding half of it while the mayor says there is funding available in the state budget. The MTA is a state-run agency. 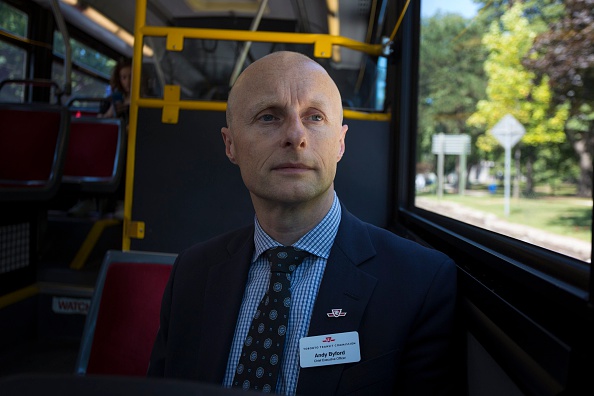