Top New York politicians blasted a new tax plan unveiled by House Republicans on Thursday that eliminates a popular state and local tax deduction that will lead to a $7 billion tax increase for more than 1 million New Yorkers.

The Tax Cuts and Jobs Act, authored by Rep. Kevin Brady (R-Texas), chairman of the House Ways and Means Committee, includes new individual tax brackets, a corporate tax cut and the removal of the federal deduction for state and local taxes (SALT) and limits the current property tax deduction at $10,000. Brady said that the bill will put $1.51 trillion toward the federal deficit over the next decade and that it will be passed by the House by Thanksgiving, according to Business Insider.

The SALT provisions are especially helpful to residents of high-taxed states such as California, New Jersey, New York and Virginia, allowing people to deduct state income taxes and property taxes, and has been in place since the advent of the federal income tax in 1913. A repeal would adversely affect families in high-tax states.

After trying and failing to repeal the Affordable Care Act, President Trump and congressional Republicans set their sights on a tax overhaul package.

Rep. Joseph Crowley, the House Democratic Caucus chairman, said that the GOP tax plan unveiled Thursday “is little more than a political scam” that he described as a “corporate giveaway that would decimate the middle-class and working families.”

“The decision by House Republicans to remove critical provisions like the state and local tax deduction and levy new taxes on homeowners punishes my constituents in Queens and the Bronx and stops everyday Americans from finding and maintaining financial security,” Crowley said in a statement. “This plan strips away the ability for Americans to deduct medical costs, imposes new taxes on seniors and disabled veterans, and rewards the offshoring of jobs.”

Eliminating the tax deduction would result in a $7.1 billion tax increase for more than 1.1 million taxpayers in New York City, according to a New York State Department of Taxation and Finance analysis of 2010 Federal Statistics of Income. And a report by the Rockefeller Institute of Government found that New York sent $48 billion more in taxes to the federal government in federal fiscal year 2015 than it received in funding.

“I’ll sum up the new Republican tax plan: The super-rich and big corporations get kickbacks, middle class Americans are left in the dust,” Gillibrand wrote.

In a September analysis, Gov. Andrew Cuomo said 3.3 million New Yorkers would see their federal income tax liability increase by $17.5 billion. On average, New York taxpayers would have to pay $5,300 more in federal income taxes. About 44 million Americans benefit from SALT, and a repeal could mean more than $1 trillion in losses for taxpayers and their communities.

“This so-called pro-growth House GOP tax plan is really just a handout to corporations, paid for by New Yorkers,” the governor said.

“The winners in Donald Trumps’s tax plan?” de Blasio wrote on his Facebook page. “Billionaires and the biggest corporations. The losers? Everyone else.”

At the end of October, Reps. Daniel Donovan (R-Staten Island) and Peter King (R-Long Island) — both Trump supporters, though Donovan has opposed him on some issues — opposed the SALT repeal and voted against. 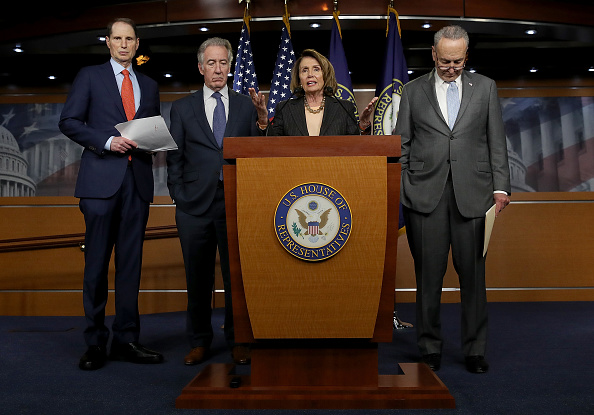