When President Donald Trump boarded Air Force One to depart from Manila, the Philippines capital, ending his 12-day, five-country state tour of East Asia, he claimed he had secured $300 billion in deals—some of which are with leaders whose records on human rights are spotty, like President Rodrigo Duterte of the Philippines.

After his first face-to-face meeting with the authoritarian leader, who is accused of carrying out a brutal operation of extrajudicial killings in his nation’s war on illicit drugs, Trump said he had a “great relationship” with Duterte, according to White House transcripts of the meeting in Manila during the Association of South East Asian Nations Summit.

Some of the victims in Duterte’s war against drugs have been children, the Geneva-based Human Rights Watch (HRW) reported in September.

“The apparent willingness of Philippine police to deliberately target children for execution marks an appalling new level of depravity in this so-called drug war,” Phelim Kine, deputy Asia director for HRW said at the time. “These killings demonstrate that Duterte’s rejection of the rule of law has made all Filipinos potential ‘drug-war’ victims, no matter how young.”

Just ahead of the ASEAN Summit in Manila, Duterte said he had killed someone at age 16.

“At the age of 16, I already killed someone. A real person, a rumble, a stabbing,” Duterte told a crowd of Filipinos in Vietnam on Thursday during the Asia-Pacific Economic Cooperation Summit, which Trump also attended. “I was just 16 years old. It was just over a look. How much more now that I am president?”

Duterte also threatened to slap a UN rights rapporteur if he ever met her, news media reported, and used obscene language to hit back at critics of his deadly drug war crackdown.

But none of that seems to bother Trump, who grinned when Duterte scolded American journalists shouting questions at Trump about Duterte’s human rights abuses, calling them “spies.”

Yep, Trump thought that was funny.

That kind of response from Trump only emboldens a thug like Duterte.

But according to HRW’s John Sifton, expectations by human rights observers were low for Trump to do much on the issue.

“No one had high hopes that President Trump would raise human rights issues during his Philippines visit.,” Sifton told Observer. “And still, it was disappointing to see a U.S. president abdicate on human rights on the world stage. Other leaders, however, were also disappointing. We also called on Prime Minister Trudeau of Canada, Prime Minister Abe of Japan, and others to raise concerns about Duterte’s record. None of them appear to have done so. The human-rights system is in a troubled state when not only is the United States failing to lead: other democracies are failing to step up in the absence of U.S. leadership.”

So who can act to fill the void left by Trump? Congress.

“And here is where Congress needs to play a bigger roll,” Sifton continued. “President Trump only represents one branch of the U.S. government. Congress needs to make more of an effort to communicate its concerns on the Philippines—through communications to the Philippines government, resolutions or legislation condemning Duterte’s record, and oversight of the administration’s actions. Presidents come and go, but Congress has consistently articulated that it wants U.S. foreign policy to robustly promote human rights. “

Someone should act—because getting into business with strongmen who murder their own people is not the kind of democratic values the U.S. should be in the business of promoting. 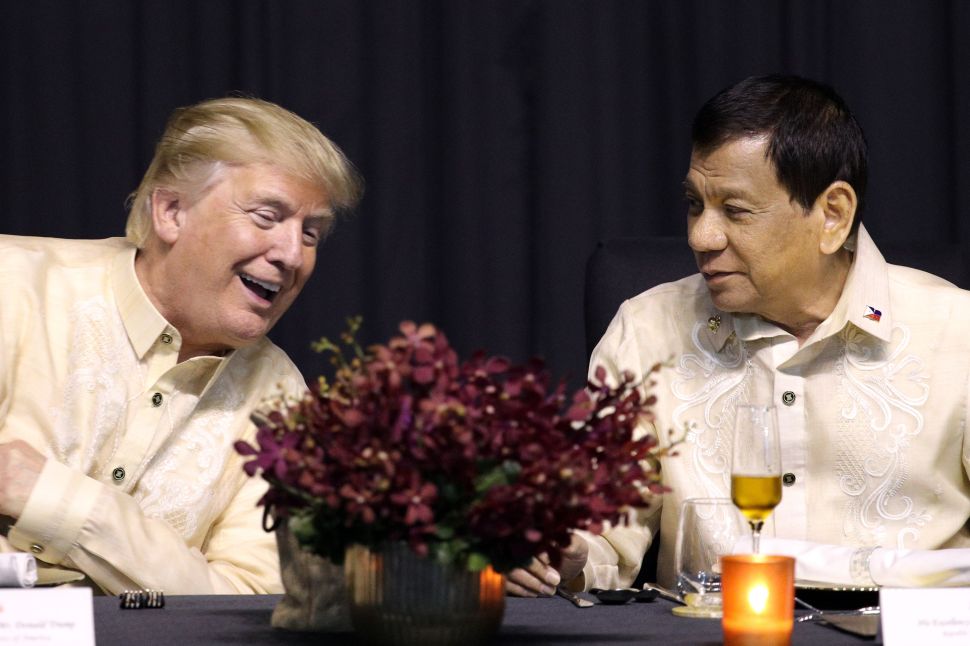