When Dara Khosrowshahi got offered the position of Uber CEO, his first impulse was to say no.

“I kind of thought the whole thing was a lark,” he said at The New York Times DealBook conference today. “It was a media circus that I honestly didn’t want to be a big part of.”

But in the end Khosrowshahi vaulted past bigger names like Jeff Immelt and Meg Whitman to land the position. Before leaving his job at Expedia, however, he confided in the company’s chairman Barry Diller, who had some words of advice.

“I told him ‘Don’t go, look at how wonderful this place is,'” Diller said at the conference. “But I couldn’t stand in the way of this big adventure, so I kind of wished him well.”

So once Khosrowshahi entered the snake pit, he tried to refocus the company on business as usual.

“This is an incredible brand and a terrific service,” he said. “The product that Travis and his team built is extraordinary. The culture went wrong, the governance went wrong, but if the product is good you can ultimately bring it together with a lot of work.”

An important part of that, at least for Khosrowshahi, was making sure Kalanick gave him space.

“I pushed him away early on,” Khosrowshahi said. “I told him ‘You’ve gotta let me engage with the team, company and culture.’ He took it very well.”

Khosrowshahi has also called Kalanick for advice, however.

“I would be foolish not to use Travis’ genius,” Khosrowshahi said. “I want him involved with the company.”

In his first two months on the job, Khosrowshahi has focused on changing the way Uber is is governed and preparing it for an initial public offering in 2019.

“The company has been operating at a very strong cadence, but it needed a culture reset,” he said. “Under Travis, the culture twisted into excuses for bad behavior and being an asshole.”

But, Khosrowshahi added, “those values (also) created the most highly valued startup in the world.”

Maintaining that value will be a challenge: Khosrowshahi admitted that Uber’s American business won’t be profitable for at least six months because Lyft is gaining market share.

Uber is doing something about that, however. Namely, aggressively marketing to potential drivers.

Uber also faces international challenges, especially in London, where it lost its license to operate because of a “lack of corporate responsibility.” Khosrowshahi said he had met with London’s transport commissioner, and admitted that in the past the company had been “generally immature” in dealing with regulators (that’s an understatement).

“I hope and expect that we will be in business in London for a long time,” he said.

Khosrowshahi also addressed the viral news that Uber was planning to collaborate with NASA on flying cars—he said he expected that project to come to fruition within five years.

But for now, Uber’s main ambitions are rooted firmly in ground transportation.

“Our interest is in building a global ridesharing network,” Khosrowshahi said. 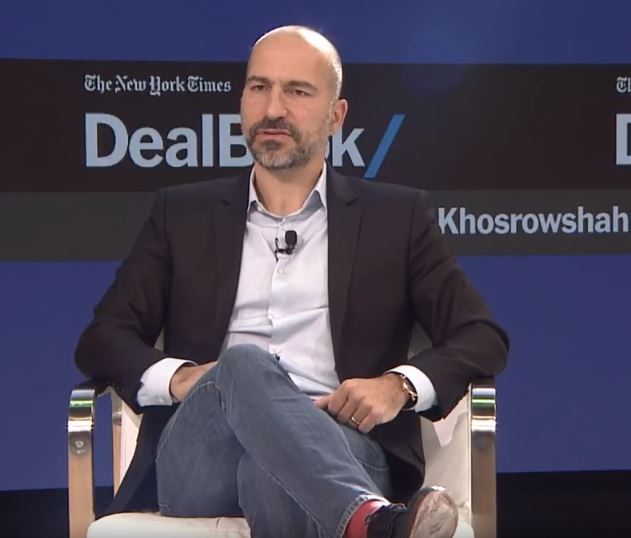