The Myanmar military is waging a campaign of ethnic cleansing against the Rohingya people living in the country’s western Rakhine, with hundreds of thousands of refugees running for their lives to cramped camps across the border in Bangladesh, according to UN and Human Rights Watch officials.

For decades the Rohingya people of Myanmar, formerly known as Burma, have endured government repression and social marginalization that is enshrined into national law (under the so-called Citizenship Act of 1982), which denies them citizenship, state identification such as passports and property ownership, and other basic rights.

That divide has sparked unrest in recent years.

In a 46-page report issed on Thursday, Human Rights Watch researcher on women’s issues Skye Wheeler said, “Since August 25, 2017, Burmese security forces have committed widespread rape against women and girls as part of a campaign of ethnic cleansing against Rohingya Muslims in Burma’s Rakhine State.”

“Over half a million have fled to neighboring Bangladesh to escape killings, arson, and other mass atrocities,” she continued in the report’s summary. “About 120,000 remain internally displaced from waves of violence from 2012 and 2016, in dire humanitarian conditions.”

The dying has included children, too.

The UN’s children agency, UNICEF, recently estimated about 14,000 Rohingya children are in danger of malnutrition.

The lucky ones make it onto rickety rafts with their parents to make the journey across the waters between Myanmar and Bangladesh, where they live in densities twice that of the Bangladeshi capital, Dhaka.

On Friday, William Spindler, a spokesman for the UN’s refugee agency, UNHCR, said in a statement from Geneva, Switzerland that conditions are worsening for those still inside Myanmar’s borders.

“More than 200 Rohingya refugees are known to have drowned in shipwrecks and boat incidents since the start of the crisis on 25 August,” Spindler said. “Recent arrivals told us they had been waiting for more than a month in desperate conditions on Myanmar’ shores. Food and are said to be running low.”

It is disgraceful that Western nations putting more pressure on the country’s government to cease its senseless slaughter and sexual assault on the civilian populace.

Spindler said an estimated 620,000 Rohingya refugees have fled to Bangladesh since late August and gave examples of their living situation there.

“The Kutupalong Extension site alone, which was set up soon after the influx began, is now highly congested sheltering some 335,000 new arrivals—more than half of the influx so far,” he elaborated. “Currently 13 out of 20 blocks in the Kutupalong Extension area are more densely populated than parts of Dhaka. An area known as Block CC shelters more than 95,000 people per sq km—according to UN Habitat data Dhaka’s population density is 44,500 people per sq km.

U.S. Secretary of State Rex Tillerson called for credible investigations into the abuses while visiting the southeast Asian nation on Wednesday, also pledging a additional $47 million in humanitarian assistance, raising the total U.S. refugee aid figure to $87 million since the escalation in violence began in August.

“The recent serious allegations of abuses in Rakhine state demand a credible and impartial investigation and those who commit human rights abuses or violations must be held accountable,” he said from Yangon, the capital, according to Reuters. “In all my meetings, I have called on the Myanmar civilian government to lead a full and effective independent investigation and for the military to facilitate full access and cooperation.”

And Aung San Suu Kyi, the former political prisoner of some 15 years under house arrest who won a Nobel Peace Prize along the way, has done little to use her positions to help the Rohingya. Since her release in 2010, she’s held a number of high-ranking political offices. She’s played to the military’s leadership, which has a power-sharing arrangement with the government, tarnishing her image as a champion of human rights.

That power-sharing deal should be crushed and Suu Kyi pressured to do more for her country where she has failed miserably with the Rohingya. 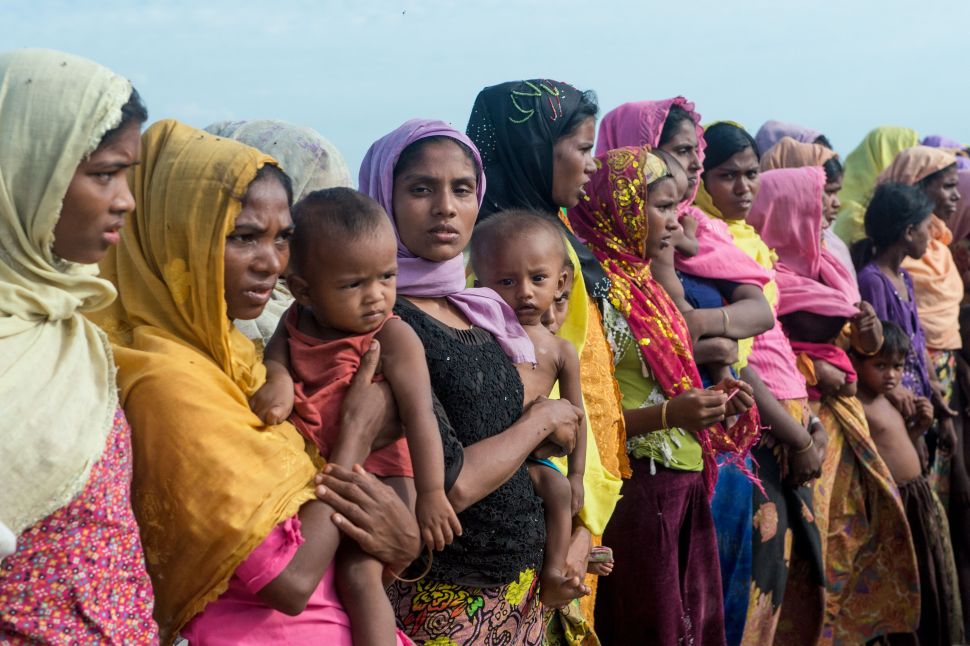