Attorney General Jeff Sessions faced a grueling, multiple-hour hearing this morning before the House Judiciary Committee. Here is what you need to know about it:

He has selective memory when it comes to the Trump campaign’s contact with Russia.

“I had no recollection of this meeting until I saw these news reports,” he said in response to being probed about reports that he and George Papadopoulos met in March 2016 to discuss a potential meeting between Trump and Putin. Even though he says he doesn’t remember such a meeting with Papadopoulos, he does remember telling Papadopoulos not to facilitate a Trump-Putin meeting.

He was caught lying about meetings between George Papadopoulos, Carter Page, and Russian officials.

Sessions continued to deny allegations that he engaged with Russian contacts during Trump’s campaign and that he knew about communication with Russia on behalf of fellow campaign advisors George Papadopoulos and Carter Page.

“I have always told the truth, and I have answered every question as I understood them and to the best of my recollection, as I will continue to do today,” Sessions said. “I will not accept and reject accusations that I have ever lied under oath. That is a lie.”

Previous testimony by Sessions suggests otherwise. In January, when asked if he knew about any Trump campaign relations with Russia, Sessions testified before the Senate Judiciary Committee that he was “not aware of any of those activities.” Again, in another Senate Judiciary hearing in October, Sessions told Minnesota Democratic Sen. Al Franken, “I did not, and I’m not aware of anyone else that did. And I don’t believe it happened,” when asked if he believed anyone from the Trump campaign was engaging in communications with Russia. On Tuesday, his memory suddenly resurfaced after evidence was “revealed in the press” following Papadopoulos’ guilty plea to the FBI.

“After reading Papadopoulos’ account, and to the best of my recollection, I believe that I wanted to make clear to him that he was not authorized to represent the campaign with the Russian government, or any other foreign government, for that matter. But I did not recall this event, which occurred 18 months before my testimony of a few weeks ago, and would gladly have reported it had I remembered it, because I pushed back against his suggestion,” Sessions testified.

He was caught lying about his own meetings with Russian officials.

Sessions was also asked to explain another convenient lapse in memory that occurred during his confirmation hearings when he denied meeting with former Russian Ambassador to the U.S. Sergey Kislyak on two occasions during the Trump campaign, the first time during the RNC and the second time in his then-Senate office.

“My focus was on responding to the concerns that I as a surrogate was participating in a continuing series of meetings with intermediaries with the Russian government. I certainly didn’t mean I’d never met a Russian in the history of my life,” said Sessions before the House on Tuesday.

Yesterday, Beverly Young Nelson stepped forward as Roy Moore’s fifth accuser of sexual misconduct, saying the Republican Senate candidate sexually assaulted her when she was 16 years-old. “I tried fighting him off, while yelling at him to stop, but instead of stopping, he began squeezing my neck, attempting to force my head onto his crotch,” she said, describing the incident at a press conference in New York City.

When Texas Democratic Rep. Sheila Jackson Lee asked for his thoughts on the allegations against Moore, Sessions replied, “I have no reason to doubt these women.”

A fellow Alabamian, Moore will run in a special election on December 12 to fill Sessions’ previous role.

He pushed back on appointing a second special counsel.

On Monday, a Justice Department lawyer informed the House Judiciary Committee that senior prosecutors were investigating the possibility of a second special counsel to investigate Hillary Clinton’s use of a private email server while serving as Secretary of State, former FBI Director James Comey’s decision not to prosecute her, as well as the purchase of Uranium One by a Russian nuclear agency under the Obama administration.

However, when pressed by Congressman Jim Jordan (R-Ohio) about what it would take to make appointment of a special counsel a reality, Sessions replied it would need “a factual basis that meets the standard of a special counsel.” He added, “We will use the proper standards, and that’s the only thing I can tell you, Mr. Jordan. You can have your idea but sometimes we have to study what the facts are and to evaluate whether it meets the standards it requires.”

“We know the Clinton campaign and the Democratic National Committee paid for the dossier,” Congressman Jordan pressed,  “and it sure looks like the FBI was paying the author of that document, and it sure looks like a major political party was working with the federal government to then turn an opposition research document—the equivalent of some National Enquirer story—into an intelligence document to take that to the FISA Court so they could then get a warrant to spy on President Trump’s campaign.”

Sessions’ response shut down any imminent possibility of an appointed special counsel, replying, firmly, “I would say ‘looks like’ is not enough basis to appoint a special counsel.” 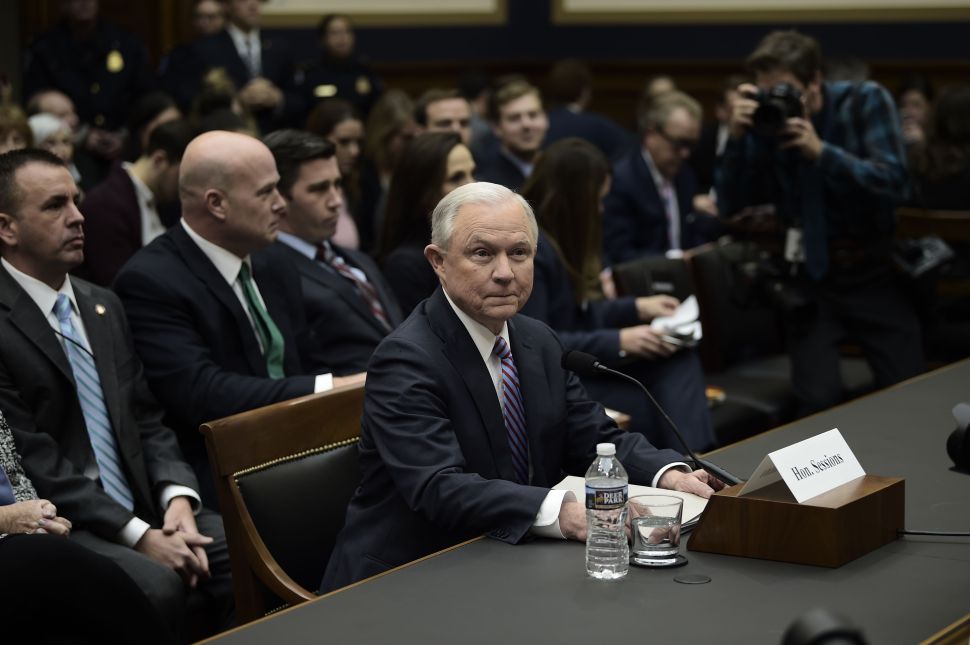