What a difference an election makes.

Just days before the special election in Alabama that pitted Generic Democrat Politician against Man Who Likes Underage Girls, a large group of Democratic Senators began calling for Senator Al Franken, a Democrat from Minnesota, to resign after eight women claimed he sexually harassed them.

Franken’s accusers trickled in slowly, and it wasn’t one, or two or five accusers that made Democrats decide to turn on their colleague, it was eight. More likely, however, the change came about because Republican Roy Moore was still up in the polls, despite being a terrible candidate not just because of the claims about his behavior with young girls, but the terrible responses from his campaign staff.

But then Moore lost, the first Republican to lose a Senate election in Alabama since 1992. Jones ended up leading by 1.5 points. Now, a week later, some Democratic senators are reconsidering their support for Franken’s resignation.

Democratic Senator from West Virgina Joe Manchin never supported the resignation unless an Ethics Committee investigation found Franken guilty of wrongdoing. For the record, I’m with Manchin on this one. People deserve a chance to be cleared of wrongdoing.

Senator Patrick Leahy, a Democrat from Vermont, did call for Franken’s resignation, but now that Moore lost, he’s come to regret his earlier stance, he told Business Insider. Another senator who called for Franken’s resignation (but who didn’t want to give Politico their name for fear of reprisal from colleagues), said: “In retrospect, I think we acted too fast.”

Two senators who called for Franken’s resignation also told Politico they were rushed into making statements.

If you’ll recall, the statements came in a quick succession the Wednesday before the election. It was clearly orchestrated that way, and Franken eventually held a press conference where he said he would resign in the coming weeks. A successor has already been named.

New York Senator Kirsten Gillibrand, famous for demanding every woman who makes an accusation be believed and undermining due process in the military and on college campuses, predictably joined the calls for Franken’s resignation. She has also now says former President Bill Clinton should have resigned. Convenient.

Oh, speaking of Clinton, he’s still cool with the Democratic Party. He just headlined a birthday party and fundraiser for New York Gov. Andrew Cuomo. No word on whether Gillibrand attended, but she’s tight with Cuomo—he even used campaign funds to buy her a Tiffany pen for her birthday (so thoughtful).

You see, calling on Franken to resign was never about getting rid of a man Democrats believed had abused women. It was never about taking a stand for women. It was a cynical ploy to appear to take the moral high ground so Republicans couldn’t say “Well, you still have Franken,” after Moore won.

Since Moore lost, there’s no need for that moral high ground anymore. Franken votes correctly, and that’s all that matters (it’s the same reason Moore only narrowly lost in Alabama). Only people on the other side of the aisle need to be held accountable.

Ashe Schow is a senior political columnist for the Observer and a Higher Education Reporter for Watchdog.org. Previously she was an editor and blogger for the Heritage Foundation and a commentary writer for the Washington Examiner. 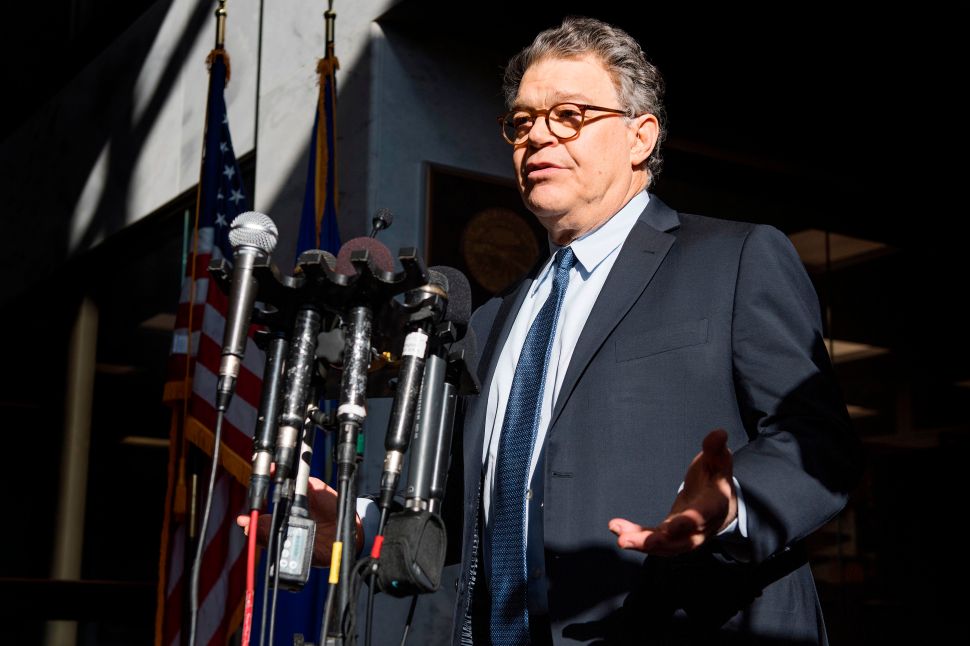