Monday’s news that former President of Yemen Ali Abdullah Saleh had been shot dead sent shock waves well beyond the geopolitical borders of the Middle East.

But within the nation itself, chaos reigns. Prior to being assassinated, Saleh held influence with Saudi Arabian leaders and Iranian-backed rebels. For more than two years, Yemen has been mired in a civil war whose proxy backers are using the country as a battle for Sunni and Shiite control of the region.

Saleh had a bad habit since leaving office: waffling. He supported the Houthis and, alternately, the Saudis at different times. At the time of his murder, he had just abandoned the Houthis for Saudi support.

He ruled first North Yemen from 1978 to 1990 and, when the north merged with South Yemen in 1990, he was sworn in as the country’s leader and ruled until he was deposed in 2012 following a Houthi rebel uprising.

With his death, Sana’a, the capital, is a political powder keg. But after a week of fighting, which the International Committee for the Red Cross estimates killed more than 230 people, there was relative pace on Tuesday. Houthis danced in the streets, celebrating Saleh’s demise, Reuters reported, while Saleh’s son, Ahmed Ali Saleh, vowed revenge.

But what impact will Saleh’s death have on the country or the region?

“The killing of Saleh complicates an already maddeningly complex situation in Yemen,” William Hartung, director of the Arms and Security Project at the Center for International Policy, told the Observer. “Saudi Arabia is already retaliating against the Houthi by bombing civilian neighborhoods in Sanaa—a form of collective punishment that may amount to a war crime. The Saudis will continue to blame the attack on Saleh on Iran, even though the Houthi largely act on their own, not at the direction of Tehran. This could exacerbate Saudi-Iranian tensions.”

And what of the impact beyond the Middle East?

“The wild card is whether the Saudis can and will use this incident to push the United States toward a military strike against Iran, which would be both dangerous and counterproductive. What is needed more urgently than ever is a cessation of the bombing campaign and a lifting of the Saudi-UAE coalition’s blockade of Yemen to allow vital food and medicines to enter the country, before more civilians die from malnourishment and disease,” Hartung emphasized.

That should be the priority for any nation with the ability to influence the Saudis and the UAE. Hartung and other Yemen analysts have argued for months the U.S. needs to exert more influence over the Saudi monarchy.
The U.S. is the primary arms supplier to the Saudi-led coalition, whose intervention has sparked what the UN has indicated is the worst humanitarian crisis in the world.

Similarly, the Houthi, the Saudi-UAE coalition fighting the Houthis, and all parties to the dispute—including Yemenis who have been victims rather than perpetrators of the violence—should be brought together to negotiate an end to the conflict.

“Letting this conflict continue is ultimately in no one’s interest,” Hartung said.

But it was the West that looked the other way during Saleh’s 33-year dictatorship. He escaped any repercussions from the torment he unleashed on political opponents, journalists and regular Yemeni citizens.

“Saleh’s death is a grim reminder of the consequences of granting immunity to those linked to grave abuses since countless Yemeni victims and their families should have been able to confront him in court for his alleged crimes,” Sarah Leah Whitson, Middle East director at HRW, said in a statement on Tuesday. “The U.S., U.K., and others should fully support the UN expert panel and pursue the justice Yemenis deserve.”

Whitson’s colleague, Kristine Beckerle, who works as a researcher in Yemen and UAE for HRW, told Observer on Tuesday that Saleh’s death leaves a vacuum for any prominent voice to advocate for the Saudi-led coalition to lift the blockade that prevents essential medical materials, clean or fuel from getting into the country.

Yemen is currently suffering the worst cholera epidemic in recorded history. Roughly 960,000 cases of suspected cholera have stricken Yemenis and more than 2,200 deaths have been recorded since the epidemic began in April, according to the World Health Organization.

“What is very concerning to me is how the coalition has increasingly restricted the flow of aid into the country,” Beckerle said. “Saleh was using the blockade as a rallying cry, but now that he’s gone, what’s going to happen with the blockade? My worry is that the coalition will double down on the blockade and with 8.4-million people on the brink of starvation in Yemen—a 24 percent increase from a year ago, by the way—it’s a humanitarian disaster.”

Beckerle said the conflict is likely to escalate. And the U.S. has been completely silent—not even issuing a press release on the matter.

Another worry, she said, is now that the Houthi have consolidated power in the capital, they may target anyone who doesn’t agree with them—committing human rights violations in the process, which has already been documented by HRW.

“The U.S. is providing enough support to the coalition to be a party to it and as such has a responsibility to comply with the laws of war,” Beckerle continued. “The U.S.’s lack of action is startling… this isn’t ‘someone else’s war.’ And the UN Security Council has been woefully silent on all of this… and their pushback has been largely nil.”

With that in mind, there are short-term and long-term prospects to consider for all actors who have a stake in Yemen’s future, according to Robert Naiman, policy director at Just Foreign Policy.

Naiman said the short-term situation looks bleak, and an escalation is sure to ensue.

“In the short term, I fear it will make the Saudis more stubborn in lifting the blockade,” Naiman said. “And Saleh generally had good relations with everyone, but now that’s been removed. The possible silver lining here is that the U.S. and Britain, for example, can now look at the situation and go the Saudis and Emiratis and say, ‘This isn’t working anymore, let’s try something else.’ …And I don’t think ‘advise’ is enough—a stronger word is needed. The U.S. needs to apply tremendous pressure on the Saudis because they’ve ignored the U.S. in the past. The U.S. has immense leverage over the Saudis and they need to apply it now more than ever.” 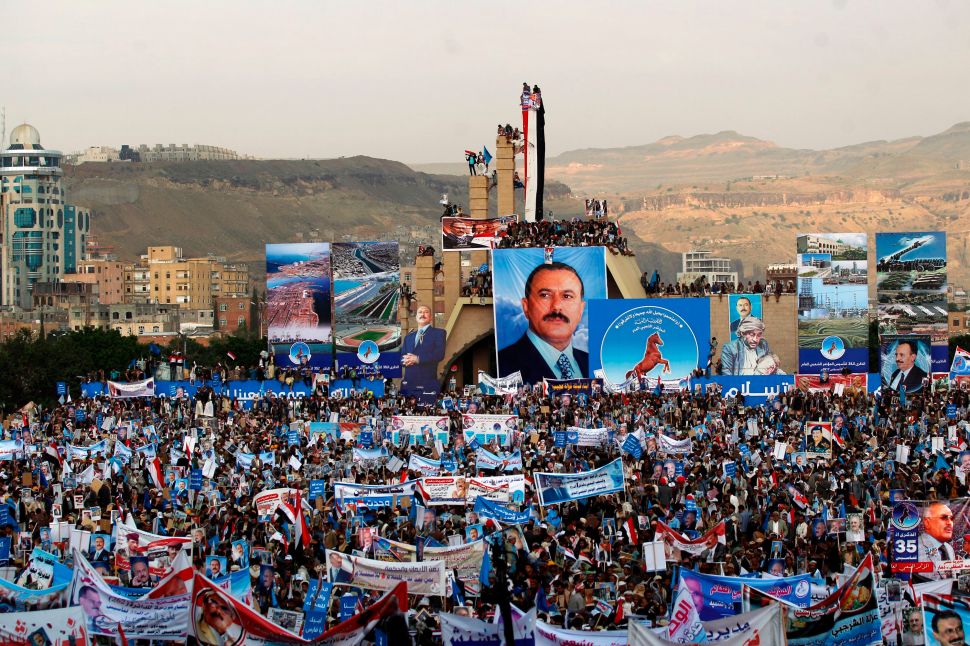