Mayor Bill de Blasio voiced support for Manhattan Councilman Corey Johnson as the next speaker of the City Council, saying he was the “right choice” because he “ran a good campaign.”

A source familiar with the discussion confirmed to Observer that Johnson has Crowley’s support. Crespo did not respond to a request for comment on Thursday.

Every four years after an election, the 51 members select a new speaker in January in an internal process run by the county Democratic organizations in Queens, the Bronx and Brooklyn. Candidates need at least 26 votes to win. The vote will take place on Jan. 3.

The Bronx and Queens Democratic organizations usually join forces. In 2013, Frank Seddio, chairman of the Brooklyn Democratic Party, ignored their choice and joined de Blasio and progressive members to back Melissa Mark-Viverito.

De Blasio told reporters on Thursday that he’s “really looking forward” to working with Johnson. He said Johnson “laid out a strong progressive vision for the city.”

“He has run an excellent race for speaker,” the mayor said. “I think a lot of times when you watch someone in a political campaign, you learn a lot about who they are and how they’re going to handle things. I think he really ran a great campaign.”

He said that from the beginning of the process, he and other stakeholders thought about how to approach the race, which he noted was “really quite different” from the last race “on a lot of levels.”

“We put a high premium on trying to get to as much unity in the end as possible in terms of the Council members, in terms of the labor community, in terms of the county Democratic organizations, trying to get to a place that we thought really maximized unity and the ability to move forward together,” de Blasio continued. “I came to the conclusion in the last few days that Corey Johnson is the right candidate to achieve that. I’m happy to support him. And I think it’s been a good process.”

This time around, he argued, there were more candidates and a “longer play-out in many ways.” He noted he and Mark-Viverito had a close relationship, and that it was a “really different reality than I experienced with this field.”

“Because there were were eight candidates, I think it elongated the race in some ways,” the de Blasio added. “but I’m confident that we’re going to do very well with Corey Johnson as speaker.”

He said he had numerous sit-down meetings with Crowley and Crespo, labor leaders and the speaker candidates and also spoke with Council members. He insisted Mark-Viverito was the right choice in 2013 but wishes “there was more unity at the end of the process.”

“This was a day-by-day conversation over months and months and we — look, we understand at the end of the last process there was some discomfort and we didn’t want to repeat that,” de Blasio said.

The mayor was in Iowa on Tuesday night to give a keynote address at grassroots organization Progress Iowa’s holiday party. The fact that the deal to back Johnson occurred while he was out of town was seen as a sign of the mayor’s waning influence. The mayor dismissed that notion.

“Everyone was in dialogue well before it became public to everyone,” he maintained.

De Blasio was said to have less influence in this year’s race because he is now a lame-duck politician. This time around, members wanted a speaker who would be willing to stand up to him.

It is unclear whether Johnson was de Blasio’s preferred candidate, though the two are known to be allies. Manhattan Councilman Mark Levine was rumored to be the mayor’s choice. De Blasio did not speak to which candidate he desired.

Johnson’s victory marks the first time the city is not led by a person of color since Christine Quinn was speaker from 2006 to 2013. When asked about the shift, de Blasio said the work of increasing diversity “is going to be ongoing work” but that he’s proud of what he accomplished in his first term.

“I hope soon that Andrea Stewart-Cousins will be the majority leader of the Senate,” he contended. “I think there’s a lot that’s in motion so I don’t think you can every judge by a single election.”

Cornegy, who has the backing of Seddio, does not believe the race is over.

“Nothing has happened between yesterday and today to change the dynamics in the speaker’s race,” he said in a statement. “We continue to run our positive, vigorous campaign to make history.”

Through a spokesman, Seddio declined to comment. The mayor told Observer Seddio was involved and that Brooklyn “obviously is my home.”

“I think very, very highly of Chair Seddio,” he explained. “I was in regular touch with him, as was my team, just like we were in regular touch with other county Democratic organizations and with a host of labor leaders and most importantly, with the members themselves. So we talked about how we saw things evolving and we talked about the importance of having Brooklyn members represented in key positions and that’s all gonna play out over time.”

Williams, for his part, tweeted a vague message.

Torres seemed to take a jab at Cornegy and Williams.

“It is time for all Speaker candidates to learn the art of a graceful exit and commit their vote to @CoreyinNYC,” he tweeted. “As goes Queens and the Bronx, so goes the rest of the Council.” 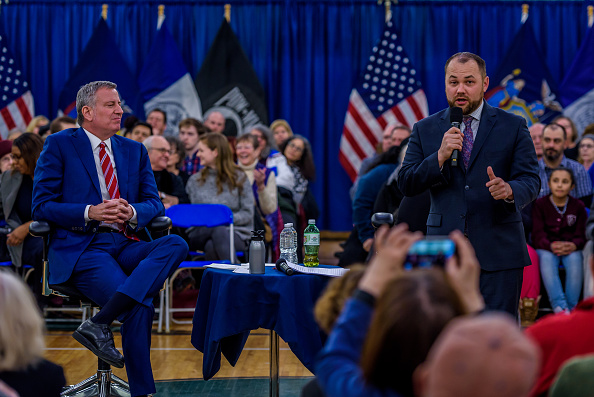