Too bad they outlawed the guillotine. There should be a sharp blade waiting in the wings for the man who told Amy Schumer she can act. Making her Broadway debut in a comically bankrupt play by the often more astute Steve Martin called Meteor Shower, the bogus stand-up, revue-skit and TV sitcom performer is less vulgar than usual, though all she has to do is burp and the audience screams with laughter. So they laugh a lot in Meteor Shower. That is not a recommendation.

Dated and stupid, this weak excuse for humor is about…well, nothing, really. It has no point and no plot, but the surreal collection of moronic one-liners takes place in Ojai, California on a night in 1993 when a meteor smashes into the home of an annoying couple named Corky (Schumer) and Norm (Jeremy Shamos). They are preparing drinks and babbling about their marriage in a ritual that forces them to approach each other from wherever they are positioned onstage and say things like “I love you and I know you love me, so I understand you probably didn’t know you hurt me so I’m asking you to be more careful with my feelings” while they await the arrival of another couple they have never met, Gerald (Keegan Michael-Key) and Laura (Laura Benanti). They announce before they enter that they have a plan in mind: “Let’s go for total collapse.” In the obnoxious ordeal that follows, they all insult each other while they munch celery and talk about sex. None of it is relevant. All of it is pointless babble, signifying nothing.

Gerald and Laura turn out to be guests from hell (or, in this case, Santa Barbara). While Corky mixes a martini, Gerald shoots heroin and snorts cocaine. Meanwhile, Laura tries to seduce Norm, but she’s too late. A meteor crashes from the sky, upstages her seduction scene, and hits Norm, who disappears in a cloud of smoke. (Unfortunately, I was hoping it would be the play, but there’s no lucky break here.) Disgusted, Gerald and Laura leave. Unfortunately, they return, ring the doorbell again, preface their entrance with the same dialogue from the previous scene, and the play begins again. This time the meteor falls on Gerald, blowing a hole through his stomach. “If you don’t deal with your subconscious,” warns Corky in a moment of intellectual candor, “it will deal with you!”

Oh, I get it. Gerald and Laura are not even real people. They are the subconscious thoughts and inventions of Norm and Corky, and every time the meteor shower strikes, they lose more of their inhibitions. Laura makes love to Corky, Norm surrenders to Gerald, and in the throes of lesbian ecstasy, the uptight Corky announces, “It’s so easy and stress-free and relaxing, just to be completely insane!” None of this makes one lick of sense, so let’s talk about Amy Schumer. Without a shred of vocal intonation, character revelation or humorous body language, she throws herself around the stage. Her acting style is a loud voice separated by hysterical cackles. Sometimes she just opens her larynx and screams bloody murder, for no reason at all. If she gets a laugh, she screams again—sometimes three screams in a row. She has all of the charm of a bowl of Grape-Nuts.

Matching her incompetence every step of the way is Steve Martin’s incoherent writing. The dialogue in Meteor Shower is a lot of meaningless words sewn together like strings of popcorn on a Christmas tree. “Aren’t you glad you’re not a man?” “Oh, so relieved. I couldn’t stand all the advantages.” This is a joke? Even veteran director Jerry Zaks is lost at sea. The best thing about Meteor Shower is that it only lasts one hour and 20 minutes, without an intermission, so the agony is mercifully brief. But the gargantuan stupidity lingers on, like acid reflux. Don’t leave home without a Zantac. 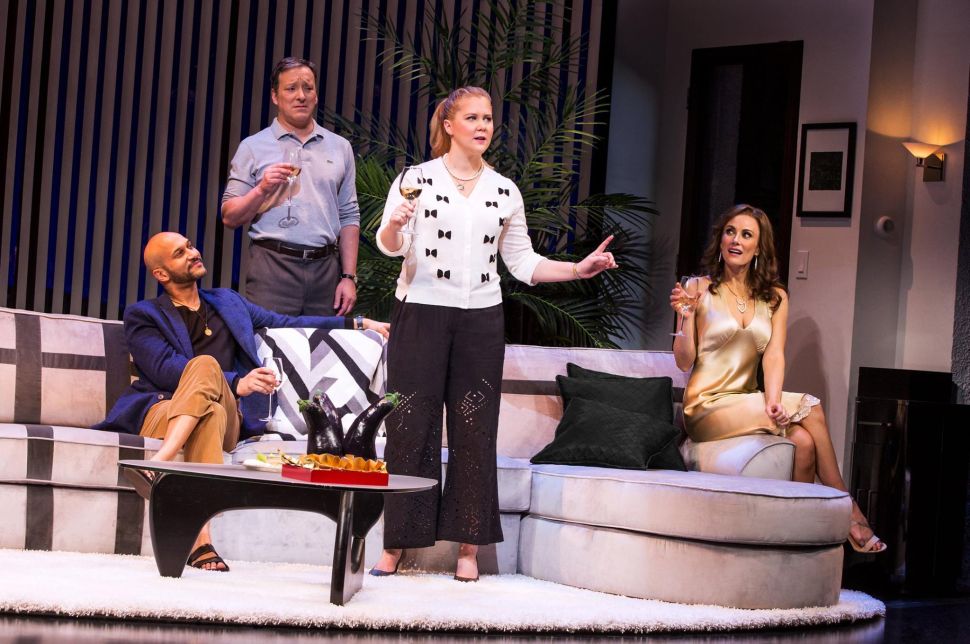