The weeklong showdown over the Consumer Financial Protection Bureau has ended in President Donald Trump’s favor. White House Budget Director Mick Mulvaney’s legitimacy as acting director was recognized by a federal judge and senior CFPB officials, leaving the former director’s chief of staff, Leandra English, to mount a legal defense. As Democratic lawmakers jockey for hegemony over the organization, a larger Supreme Court Case is taking shape. At stake is the extent of unregulated capitalism and the executive branch.

Following Franklin D. Roosevelt’s New Deal, over 100 “alphabet agencies” were enacted to combat the effects of the Great Depression. While the president maintained control over his cabinet to keep the executive branch nimble, these commissions were helmed by bureaucrats with policy expertise. The Federal Vacancies Reform Act of 1998 granted the executive branch the power to temporarily authorize officials to agencies, provided they were confirmed by the Senate. The caveat was “if unless another statute expressly designates a particular officer to serve in that acting capacity.”

When the CFPB was founded in 2010 following the passage of the Dodd-Frank Act, a provision was included where the deputy director “shall serve as acting Director in the absence or unavailability of the Director.” Lawyers often cite shall as definitive, as opposed to may. The language of the laws governing the CFPB entrusted powers to the agency’s director, not the executive branch.

Though the powers of the executive branch mushroomed since WWII (further expanding under the Bush and Obama administrations as related to wartime powers), Trump’s appointment of Mulvaney undermines Congress’ authority to create the independent agencies envisioned by Roosevelt, especially if Mulvaney is appointed without a confirmation hearing.

“There’s a mythical misunderstanding about the Constitution being this stalwart, self-executing protector of individual rights,” Baltimore School of Law professor Kimberly Wehle told Observer. “Once something like this happens where we tolerate the president picking and choosing which provisions of statues give him more power, then that goes into the presidential toolbox. Regardless of party, that’s a historical precedent that can be picked up later.”

“From a constitutional standpoint, it’s a showdown between Congress and the president,” addded Wehle.

Congress, however, is controlled by a party that has sought to eliminate the CFPB since its conception in the wake of the 2008 Financial Crisis. And in an era of party polarization, Mulvaney’s appointment benefits the Republican Party’s ongoing efforts to dismantle policy initiatives enacted during the Obama years. Mulvaney even once called the CFPB “a joke.”

Though the agency has been criticized of diverting millions of dollars to Democratic allies and hiring based on political affiliation, it has also held irresponsible financial institutions accountable. Most notably, it fined Wells Fargo $100 million in 2016 for secretly opening thousands of unauthorized customer bank accounts.

Mulvaney’s appointment tilts the U.S. system of checks and balances evermore to the White House. And Democratic lawmakers are mounting a defense that could bring Mulvaney and English’s office politics to the Supreme Court.

“This is just the beginning of what will likely be a long legal battle,” Ranking Member of the House Committee on Financial Services Rep. Maxine Waters (D-Calif.) told HousingWire. “While the temporary restraining order has been denied, the merits of the case have yet to be decided.”

Although Republicans took months to unify behind tax reform, the president has most effectively pushed his free-market platform through reducing the scope of federal agencies. If the CFPB saga goes to the Supreme Court, Trump’s appointed Justice Gorsuch will likely subvert power back to the executive branch, further ballooning the powers of the White House. 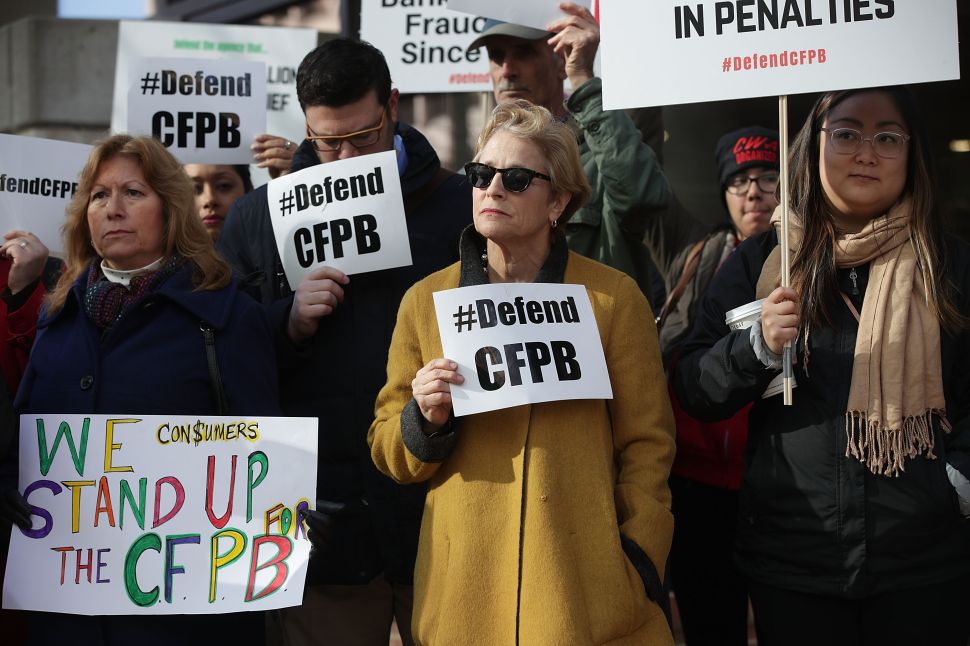