Chamath Palihapitiya, a former Facebook executive in charge of user growth, refuses to be a user of the social network giant that he helped create. He doesn’t allow his kids to use the platform, and encourages other people to stay away from it, too.

At a November speech at the Stanford Graduate School of Business, Palihapitiya, now a venture capitalist, warned the audience of the “very bad state of affairs” we are in, thanks to the proliferation of social network platforms.

“I don’t have a good solution,” he said. “My solution is that I just don’t use these tools anymore. I haven’t for years. It has created a huge tension with my friends, huge tensions in my social circle.”

“The short-term dopamine-driven feedback loops that we have created are destroying how society works: no civil discourse, no cooperation, misinformation, [and] mistruth. And this is not a American problem; this is not about Russian ads; this is a global problem.” he added.

Palihapitiya worked at Facebook from 2005 to 2011 as the vice president of user growth. He joined the company when it was just a little more than a year old. During his time, Facebook’s monthly users grew more than 150-fold from 5.5 million in 2005 to 845 million by the end of 2011.

“I feel tremendous guilt,” he said. “I think in the deep, deep recess of our minds, we all knew something bad could happen. It’s a point now that we have created a tool that’s ripping apart the fabric of how society works. That is truly where we are,” he said.

Palihapitiya said he had posted less than 10 updates on his Facebook page in seven years, because he didn’t want to get “programmed.” “We get rewarded with these short-term signals—hearts, likes, thumbs up. We conflate that with value, and we conflate it with truth. “

Palihapitiya started venture investing on the side while he was at Facebook and proved himself a savvy investor. He was an early investor in big data company Palantir (valued at $20 billion now), game developer Playdom (bought by The Walt Disney Company in 2010) and BumpTop (bought by Google in 2010), among others.

After leaving Facebook, Palihapitiya founded his own venture fund, Social Capital, with the goal to “advance humanity by solving the world’s hardest problems,” according to the company website.

“That business [Facebook] overwhelmingly does positive good to the world. Where I decided to spend my time is to take the capital they rewarded me with and now focus on the structural changes that I can control,” he said, his top areas of interest being diabetes (because of a family history of the disease), education and climate change.

Social Capital has so far invested in 250 startups, according to Crunchbase data. The firm has significant stakes in enterprise software, health care and education sectors. Some of its investments, including Slack, Bustle and Survey Monkey, have become household names.

Born in Sri Lanka and growing up in a poor immigrant family in Canada, Palihapitiya developed an unshakable belief in the necessity of money and its power to change the world at an early age. “In the absence of capital, you are irrelevant; with capital, you are powerful, and you decide,” he said. “Get money and don’t lose your moral compass when you do.”

Palihapitiya has an ambitious goal to, through his invested companies, generate $1 trillion in income and positively affect a quarter of the world’s population by 2045.

However, when asked how would he keep that power from corrupting him, he said candidly, “I have no idea.”

Palihapitiya’s net worth is estimated at $1 billion today. 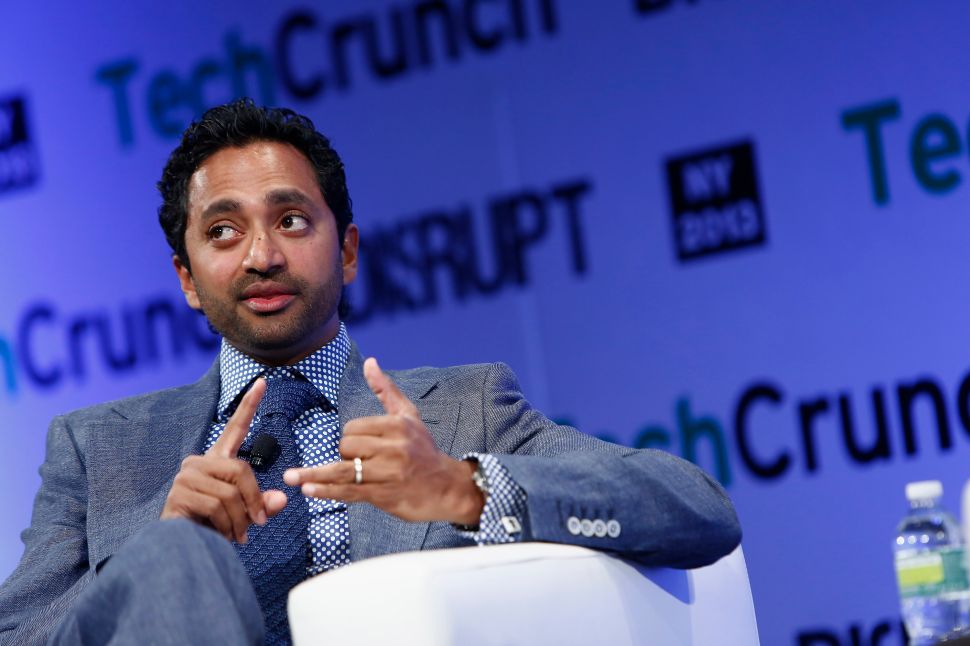