Senate Minority Leader Charles Schumer says the GOP should hold off on voting on their tax reform plan until Alabama Senator-elect Doug Jones, a Democrat who beat Roy Moore in the Alabama Senate race on Tuesday night, is seated.

“Today we Senate Democrats are calling on Mitch McConnell to hit pause on his tax bill and not hold a final vote until Doug Jones is sworn into the Senate,” Schumer said during a press conference on Wednesday morning. “Doug Jones will be the duly elected senator from the state of Alabama. The governor didn’t appoint him, he won an election. It would be wrong for Senate Republicans to jam through this tax bill without giving the duly elected senator from Alabama the opportunity to cast his vote.”

Once Jones is sworn in, the GOP will have a 51-member majority. He recommended his Republican colleagues “should stop before it’s too late” and work with Democrats on a bipartisan bill. He admitted the bill may not be liked by the far right or fare left but that it is ultimately a better way forward.

“It’s a loser the way it was written,” he said. “It’s a loser because it helps the wealthy and special interests and not the middle class.”

Schumer told reporters that he spoke with Jones but they did not discuss the tax plan.

“He will make a decision based on what he believes is good for the people of Alabama,” he continued.

The senator argued the victory was a referendum on Republican policies.

When asked whether it was also a referendum on Moore’s conduct, Schumer said a party that clings to a candidate like Moore “has something really wrong with them” but that it “wasn’t the whole story.”

Alabama Secretary of State John Merrill told CNN that the election results have to be certified no sooner than Dec. 26 and not later than Jan. 3 and that it is “highly unlikely” that Jones is not the winner. Moore will not concede, but a recount would not occur given that Jones beat Moore by more than half a percentage point.

While acknowledging the law, Schumer still maintained it would be “very nice” to see Jones sworn in this year.

“I’d like to see him seated as soon as possible,” he said.

On Tuesday night, Schumer took to Twitter to congratulate Jones. He blasted Moore and predicted that Democrats would have a good year in 2018.

“Doug Jones will be an outstanding Senator who will represent Alabama well. He was a great candidate and will be an even better Senator. Alabama Senate race, Democrat, Republican, black voters, 2017 elections, Senate, Alabama,” Schumer said. “Roy Moore was an awful candidate and should never have gotten to the Senate. But make no mistake, just like in VA, Dems are energized, focused more on the middle class and those struggling to get there, and things are looking better and better for 2018.” 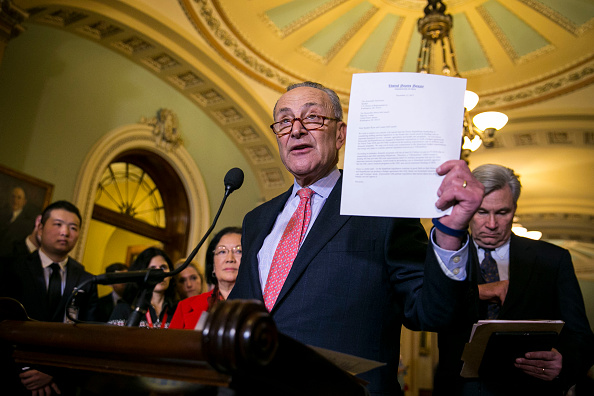