When quizzed about the food being served at the Food Meets Art bash during Art Basel Miami Beach on Friday night, chef José Andrés had to defer to an associate for some details. They conversed in Spanish for a moment, before the chef turned to this journalist and joked: “Yeah, I’m totally aware of what’s going on.”

He didn’t go on to say that we were going to be noshing on mini roasted suckling pig bao buns, inventive piña colada and mojito oysters and caviar bites stuffed into crispy plantain cones. But Andrés, who is a member of the American Express Global Dining Collection, was happy to discuss how the evening would be giving back his N.G.O., World Central Kitchen, and Puerto Rico Hurricane Relief.

For the event, he flew down two of his chefs from Mi Casa, his restaurant in Puerto Rico that has shuttered since Hurricane Maria battered the island. They whipped up avant-garde bites for the evening, which took place poolside at the SLS South Beach Hotel; the displaced chefs will soon join the kitchen staff at The Bazaar, Andrés’ restaurant in the hotel. He also partnered with his friend Carolina Stubbe, to curate live installations by Puerto Rican artists Omar Obdulio and Carlos Mercado.

“You see that Puerto Rico has been very much on my mind. And it’s important to have a little window of opportunity during this week of chaos in Miami,” he told Observer. The event was open to American Express Platinum Card Members, though we also spotted a few celebs, such as Karolina Kurkova, Jennifer Fisher and Jonathan Cheban. So while the chef rubbed elbows with art dealers and celebs on a Friday night, his team spent the day feeding 20,000 people in Puerto Rico, which is still recovering, three months following the landfall of the category 4 storm. Andrés estimates that World Central Kitchen has fed nearly 3.2 million mouths in Puerto Rico since September—which is massive, considering the population of the island is just 3.4 million. Andrés told The New York Times that he originally anticipated feeding just a few thousand people there, but instead opened “the biggest restaurant in the world in a week.”

Of course, Andrés isn’t just doling out aid for that natural disaster. Late last week, the James Beard Award-winning chef sprung into action in Southern California, to help those affected by the wildfires that have now decimated hundreds of thousands of acres of land.

We delivered our first round of 1,000 meals today to the first responders stationed at the Jackie Robinson Stadium. Thanks to all the volunteers who helped out in the kitchen! #ThomasFire #LAFD pic.twitter.com/uYpLYZzIBh

“Today we did 2,000 meals in L.A., to feed the firefighters. I couldn’t go because I can’t keep canceling my life three months in a row everytime there is a disaster,” he explained. In his place, Andrés sent some of his team members to help out and he’s coordinating with Robert Egger, from World Central Kitchen partner nonprofit, L.A. Kitchen.

“We have an amazing kitchen in Downtown L.A. and I said, ‘Robert, let’s activate this. Let’s do it.’ So we began getting fruit from Dole, chickens from Perdue and other donations from other people. We’re putting some more money in, feeding some shelters and firemen.” Andrés isn’t sure if he’ll be making an appearance to support the West Coast mission, but he does anticipate having to provide even more meals to those who have been evacuated and those whose homes have burnt to the ground.

On Monday morning, the chef called out on Twitter that even more volunteers are needed, tagging Ellen Degeneres and Katy Perry, both of whom have been affected by the fires.

Join us! We need you, anyone wants to volunteer…… @katyperry @TheEllenShow https://t.co/iFWgrByre4

More than just a celebrity chef, Andrés is using his public platform and major following to help make the world a better place. And despite all the modern advances in the food industry, being able to give back is what he loves the most about his job.

“It’s funny to me that food is at the heart of everything. Chefs like me, we can have an impact feeding people post hurricanes, giving food relief in ways we never thought possible before,” he explained. “We are on the Hill lobbying, we are giving classes at Harvard on physics. What excites me? If you are in the food profession, you can be anything you want!” 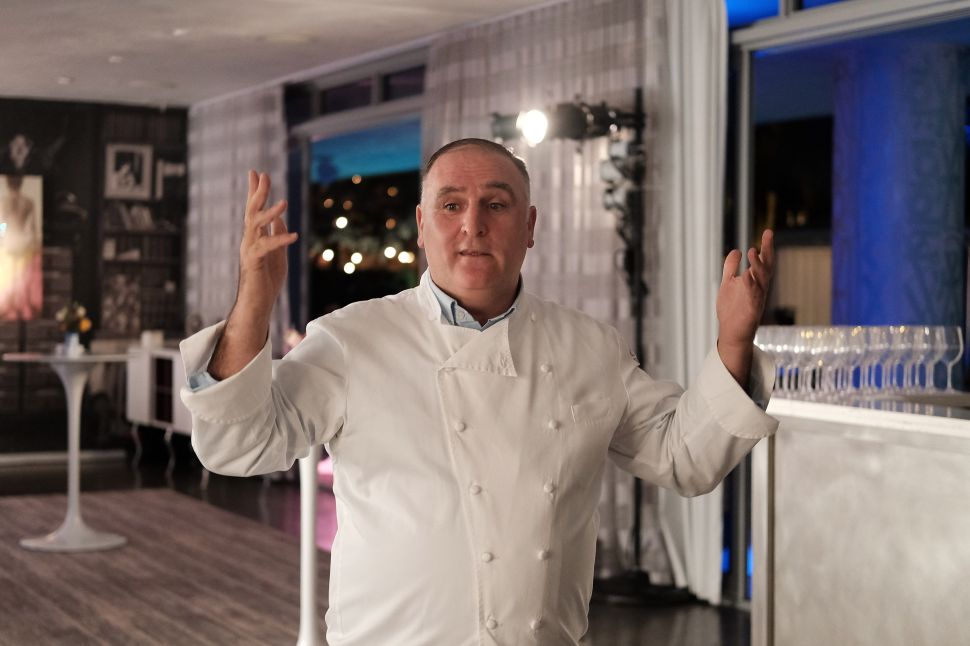