In December, offices and workspaces around the country get in on the holiday spirit with annual parties that include snacks, drinks and games. And, if you’re particularly unlucky, a disastrous The Office-esque not-so-Secret Santa. Depending on your office culture, these events might be hosted off-site at a local bar or restaurant, but for others, the annual holiday party is a potluck-style affair—and the competition for the best seasonal snack is high.

Picking the right dish to bring to an office potluck can be a real challenge: you don’t want to get too experimental, but you also don’t want to be accused of phoning it in. Essentially, you’re looking for a crowd-pleaser that will be easy to store in an office fridge and, if needed, can be reheated in an office microwave. While we’ve got nothing against a tasty seven-layer dip or a solid crudité platter, we also think that creative bites with personality make for a great holiday party upgrade. With that in mind, we asked a group of chefs and event coordinators for their top recommendations for bold office-party eats and here’s what they had to say.

If ease is your potluck priority, a cold salad or side is definitely the way to go. It’s pretty hard to get stressed over a dish that doesn’t need to be reheated, but choosing a simple dish doesn’t require compromising in the flavor department. Case in point? This shaved brussels sprout slaw, which is finished off with bright citrus dressing, rich hazelnuts, and a salty zip from Pecorino cheese. Chef Laurence Edelman of NYC’s Left Bank praises shaved sprouts for their low-maintenance service style; once they’re out on the potluck table, “they can sit for hours” without losing their crunch and zest. His freeform recipe allows you to adjust the amounts of each element to suit your palate (and that of your co-workers’).

Hummus and veggies are a party-snack classic for good reason; dips are super-customizable, easy to transport and devoured by adventurous and finicky eaters, alike. But if you’d rather not grab a tub of Sabra from Fairway and call it a day, Chef Tarik Fallous of Au Za’atar in Alphabet City has a pepper-infused spicy hummus recipe in a vivid and holiday-apropos shade of red.

“It’s an easy crowd-pleaser, and it’s on the light side, [which is a nice change] when there’s a ton of heavy eating happening during the holidays,” says Chef Fallous.

Winter can be a tough season for the vegetarians among us, as fresh local produce is tough to find and the rich, comforting dishes associated with cold weather tend to rely on meat and dairy. But satisfying veggie appetizers with seasonal flavors are definitely out there and since they can be enjoyed by meat-eaters and vegetarians alike, they’re a great choice for an office potluck. Chef Justin Nuebeck of Bedford & Co., located in the Renwick Hotel, offers up a mushroom dish that’s shareable and simple to store in an office kitchen. According to Chef Nuebeck, “[Winter Mushrooms are] super-easy to make, yet they seem impressive.”

Thanks to holiday happenings and Super Bowl viewing events, winter is the prime season for chicken wings. Spicy, comforting, and handheld, wings are also very easy to make ahead of time (arguably, they’re better that way because it allows more time for the bold flavors to develop). For an island twist on the typical wing, Freda Gore of Caribbean Culinary Tours & Vacations uses jerk spices and a banana-ketchup dipping sauce. She also bakes her wings, rather than frying them, which makes them “easy to transport without making a mess, and a bit healthier.”

In recent years, cupcakes have replaced regular cake as the go-to dessert for office birthday celebrations, which makes total sense. These tiny treats are pre-portioned, easy to carry one-handed and undeniably cheerful. For all of these reasons, they’re also a great pick for a holiday-potluck treat. The cupcake mavens at New York-based baking-kit service Red Velvet NYC recommends their Candy Cane Cupcake recipe for such occasions; they’re rich chocolate cakes, topped with peppermint buttercream and decorated with crushed candy cane “sprinkles.” 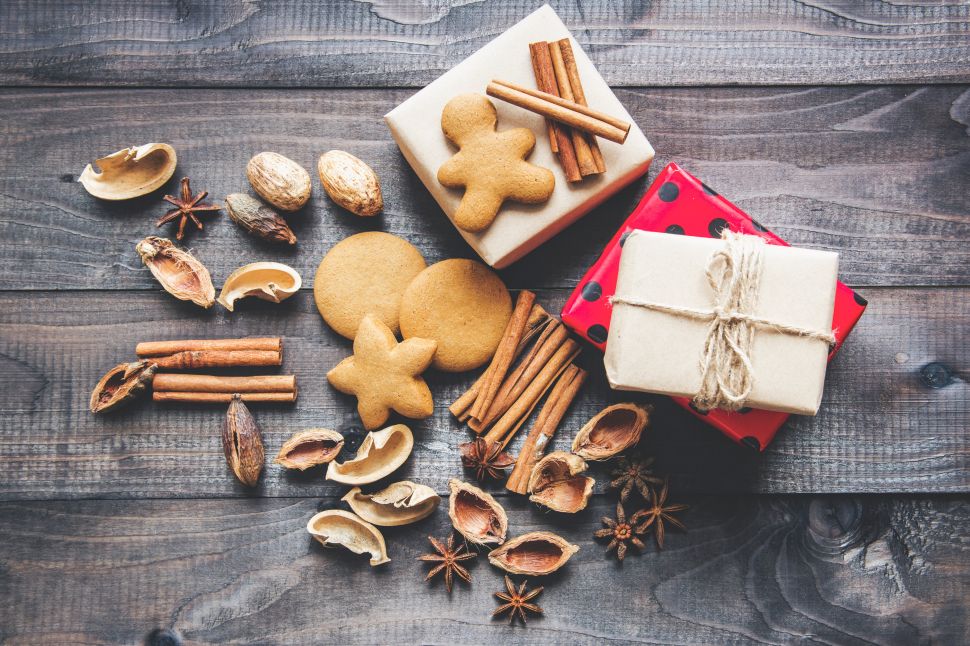