In November 2016, McCray announced the formation of the Cities Thrive Coalition, a bipartisan group of mayors from all 50 states, Washington, D.C. and Puerto Rico looking to shape mental health reform locally and nationally. It draws on the main principles for action in the city’s mental health initiative, ThriveNYC, which McCray spearheaded and created in November 2015. The coalition, which strives for a better funded and more consolidated behavioral health system nationwide, expanded from 25 cities last year to 200 cities this year.

McCray, who gave the keynote address at the second convening of the coalition in Manhattan on Monday morning, told Observer in an interview after her address that the coalition’s priority is ensuring former President Barack Obama’s Affordable Care Act is “not repealed or completely sabotaged.”

“The ACA is not perfect, but it is what gives us parity for mental health, parity with mental health services, that we didn’t have before,” McCray said. “So without the ACA and what they call the essential health benefits, which is mental health, we would lose so much ground.”

Another concern for the coalition, she noted, is seeing the 21st Century CURES Act, which seeks to speed up the development of medical products, fully funded.

Last May, the coalition hosted a day of action for mayors in which they wrote letters to congressional leadership. On Dec. 6, as Congress deliberates the fiscal year 2018 appropriations package, the group is sending a letter to House Speaker Paul Ryan, Senate Majority Leader Mitch McConnell, Senate Minority Leader Charles Schumer and House Minority Leader Nancy Pelosi outlining core funding priorities as well as its requested funding levels. Any coalition member can sign the letter.

“With at least one in five Americans experiencing a mental health disorder and over 60,000 Americans dying last year due to drug overdoses, the federal government must play a more outsized role in combatting this crisis,” the letter reads. “We call on President Trump to declare a National Emergency, which would open up critical federal resources for our communities. In addition, we call on Congress to appropriate increased federal funding to help fight this behavioral health epidemic, as local investment alone will not suffice.”

Other provisions they are seeking in the fiscal year 2018 spending package are the five-year funding reauthorization of the Children’s Health Insurance Program and five-year funding extension for community health centers. Additionally, the coalition is requesting a two-year delay in Medicaid Disproportionate Share Hospital payment reductions and the inclusion of the Bipartisan Health Care Stabilization Act of 2017, or the Alexander-Murray Stabilization Bill.

McCray is gathering signatories for the letter and plans to send it in the upcoming days. The coalition will not know if its requests have been granted until the end of the month.

In May 2017, McCray authored a Cities Thrive bipartisan letter addressed to McConnell and Schumer urging them to oppose the American Health Care Act. The letter had 122 signatories.

McCray plans to visit Washington, D.C. in January to advocate for more funding to mental health services as well as to speak with members of Congress. The coalition plans to work with lawmakers in the coming weeks and months ahead.

“I’ll be traveling to Washington in January to meet with leadership in Congress to talk about all of these things because we really can’t—we can do some things on the ground in all of our cities… to varying degrees, but if we had leadership in Washington, D.C., there is so much more we could do,” McCray continued.

She has travelled to D.C. seven times this year.

The First Lady is also encouraging coalition members to participate in a Mental Health Weekend of Faith, which drew houses of worship from 40 different cities last May.

“We hope for a greater participation this year and we hope that—we hope to see a large group going to Congress in January,” she added.

When asked how the coalition was able to expand from 25 to 200 cities, McCray attributed its success partly to word-of-mouth advertising and the simple fact that there was a need for it. Mayors, she argued, are “so close to the ground” in terms of observing day to day challenges.

“I think that people, all those people you see, they know that this is true, and they’re all looking for solutions,” she explained.

Private sponsors have contributed $80,000 to support the coalition, including funding the 2017 conference as well as the coalition’s framework for transforming its advocacy into action.

She praised the help line for handling crises and connecting people to mental health care professionals. It was inspired by Georgia’s help line.

“Ours is more comprehensive, but we couldn’t have done what we did if we didn’t learn from what they were doing and then use that as a foundation to build on, to be able to respond to the needs of our community,” McCray said.

ThriveNYC has 54 initiatives under its umbrella. McCray counted Boston, Madison, Wisconsin and Louisville among the cities involved in the coalition’s formation. She described the coalition is an “offshoot of Thrive.”

“They’re like, ‘Well, we want to know more. How can we know more? How can we do this in our own city?,'” she recalled. “And that’s what gave birth to this conference: the need to bring people together so we didn’t have to go here, go there, call this one, call that one.”

She contended the coalition is necessary is because there is a “great need” and called for more integrated care.

“One in five adults and one in five children are struggling with a mental illness or substance abuse or both right now,” she said. “That’s a lot of people. And the other four in five, those are sisters, parents, friends, coworkers. So I can’t be in pain and my family doesn’t feel it right? We’re all touched by this, we’re all connected to it.” 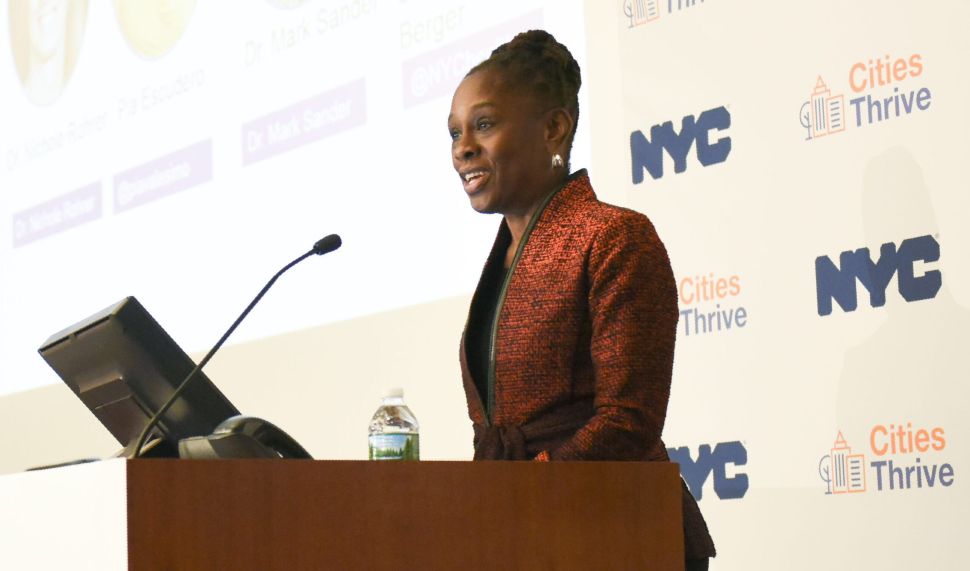