Don’t be cynical, young journalists are told, be skeptical.

Jake Tapper and his guests acted on this traditional wisdom Tuesday afternoon when Republicans in the House of Representatives passed a tax cut—mostly for the wealthy—and sent it up to their big brothers in the Senate for polish on its way to the White House.

“Has there ever been a piece of major legislation passed by the Congress with less support?” Tapper asked at the opening of The Lead yesterday on CNN.

With screen graphics, Tapper showed that a CNN survey found 55 percent of the country was against the tax cut and only 33 percent in favor. Sixty-six percent said they thought it benefitted the rich. The same poll showed President Trump’s job approval a mere 35 percent.

Then Tapper turned to Jeff Zeleny, CNN’s reporter on the White House lawn, and showed a clip of press secretary Sarah Huckabee Sanders trying to talk around a pointed question: How would the “blue-collar billionaire” fare under the new law?

“In some ways, particularly on the personal side, the president will likely take a big hit,” Sanders said. “But, on the business side, he could benefit.”

Up until now, Trump has insisted that the tax cut will be a “great, great, beautiful” Christmas gift for almost everyone—although he, Trump, would probably not benefit from it.

Zeleny put that claim in perspective, the way skeptical journalists often do.

“That is impossible to answer or fact-check,” Zeleny said, because Trump refuses to make public his tax records to show his real wealth.

Critics of the bill said Trump folded on his promise to close loopholes for hedge-fund managers, while a late provision inserted by senators gave a big break to real-estate investors—like Trump and Senator Bob Corker of Tennessee. Facts and math show most money in the $1.5 trillion cut will go to the rich.

After the Senate took up the bill, the House discovered that it would have to vote again on it on Wednesday because of technicalities. The Senate was expected to pass it late Tuesday with another House vote expected on Wednesday. Trump could sign it at any time.

Trump’s White House staff, Zeleny said, had tentative plans for a White House ceremony on Wednesday “to crow about their first legislative accomplishment of the year.”

To analyze this accomplishment, Tapper interviewed historian Douglas Brinkley and journalist Maggie Haberman of the New York Times, skeptics both.

“There’s something desperate about it,” Brinkley said. “It’s happening when people are calling Trump’s first year a slow-motion disaster…Donald Trump isn’t transparent. He isn’t showing people his taxes. It seems to be a sweetheart deal for rich people.”

Tapper asked Haberman about how Sanders complained that stories in the media are 90 percent negative toward Trump, and that is why his popularity is so low despite a healthy economy and healthy tax cuts. Haberman said Trump has a fundamental misunderstanding in his expectations for Washington media.

Trump thought “He would do something—make a deal or sign legislation or have some accomplishment—and he’d get praise,” Haberman said, “because that is what the media is supposed to do.”

Although Republicans are claiming the tax cuts as a “win,” Haberman cautioned against unintended consequences.

“I understand why they want to celebrate it,” she said, “but, again, I think there is a substantial argument to be made from its critics why this could be an albatross for Republicans in the 2018 mid-terms and that is something the president will have to own, too.”

Viewers preferring to watch right-wingers on Fox could hear Ed Henry gloat on Tucker Carlson Tonight that “The Left is howling about this tonight, which can mean only one thing: President Trump on the verge of a major victory.”

“Over 80 percent of taxpayers will see a reduction, despite Democratic claims that this is for the rich and not the middle class,” Henry said, adding that it is a “desperately needed win for the president.”

Those preferring a more progressive or liberal take could catch Lawrence O’Donnell on The Last Word on MSNBC.

He was especially outraged by the “Corker Kickback” in which Corker will benefit from last-minute tweaks favoring his real estate wealth. O’Donnell once worked as the chief of staff for the Senate Finance Committee and understands tax bills.

“The ugliest of pigs at the trough that I have ever seen in Congress,” O’Donnell said, in reference to Republican senators.

One of his guests—Neera Tanden, president of the Center for American Progress—told O’Donnell that Republican donors are cashing in on support for all those legislators over all those years.

“Hundreds of millions of dollars into Republican campaign coffers,” she said. “…Finally getting their return on investment.”

She would have fit right in on Tapper’s hour, where Haberman sounded weary of Trump’s refusal to reveal personal financial facts while making debatable claims.

“Until we see his tax returns, this is them saying essentially ‘Take our word for it,’” she said, adding that Trump’s claims about his taxes amounts to an “honor system.”

“It is clear that in terms of business, his business and other businesses of his friends and of his donors would qualify for pretty substantial benefit under this tax bill,” she said. “That is something that people can just see in front of their eyes. That’s not the media spinning it as the White House would suggest.” 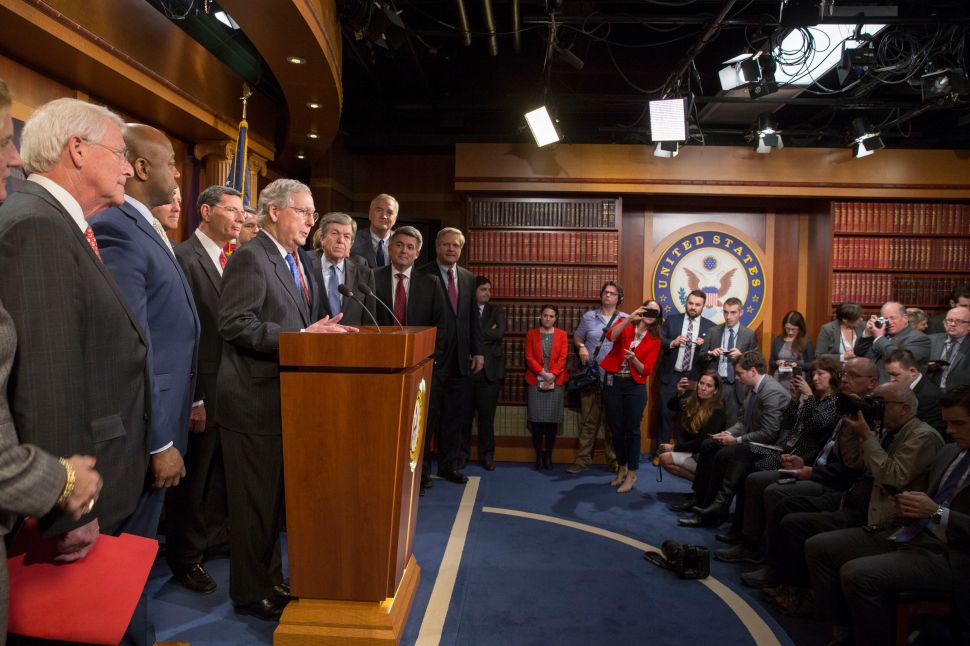