For the eight years Barack Obama was president, annual economic growth averaged less than 2 percent, which is the growth rate of a stagnant third world country. But in less than a year, President Trump has the economy booming ahead with 50 percent more economic growth. Unemployment last month fell to a negligible 4.1 percent, the lowest in 17 years.

That is primarily due to Trump’s aggressive deregulation, mostly reversing Obama era overregulation. When the lower tax rates of tax reform become effective, that will kick-start growth even more, closer to 4 percent for the long term.

Moreover, because President Obama’s recovery from the 2008-09 recession was the worst recovery from a recession since the Great Depression (which I explained in detail in a study for the Heartland Institute published last year), there is still a rebound effect within this economy that will push annual growth above 4 percent for the short term. This economy is capable of growing 5 percent or even 6 percent, for a couple of years or so, until it catches up to the long term trend line of where it should be.

That is what tax reform is all about. Gaining the advantage of that restored, lost, American economic growth. Not the deficit. Any currently projected deficits could not be more irrelevant. Under tax reform, we will enjoy a different economy than we have suffered from over the last 10 years at least.

That is why even the score of the Republican tax reform bill by Congress’s Joint Committee on Taxation (JCT) as adding $1.4 trillion to the deficit over the next 10 years is actually good news for Republicans. Because that means that the bill now before Ways and Means is officially scored as fitting into the budget allowance ($1.5 trillion) Republicans provided for tax reform in adopting their budget just a few weeks ago.

But we know from experience with tax cuts and reform under both Presidents Kennedy and Reagan that nothing like that deficit increase is going to happen. Reagan cut the top income tax rate from 70 percent when he entered office, all the way down to 28 percent, with tax cuts of 25 percent in rates for everyone else.

But federal revenues nevertheless doubled while Reagan was president. And the economy took off on a 25 year, generation-long economic boom. President Kennedy cut the top income tax rate from 91 percent when he entered office, along with a roughly 23 percent cut in rates for everyone else. That rate cut was revenue positive from the start in year one, as the economy took off on a boom for the rest of the decade.

Harvard Economics Professor Martin Feldstein explained it well in the Wall Street Journal last Monday, writing, “The debate over tax reform is focusing on all the wrong things….What will truly matter for the economy is corporate tax reform, which will lead to a major increase in capital spending by companies. That in turn will raise productivity and real wages.”

Feldstein adds, “As capital flows to corporate investment in the U.S. economy from the rest of the world…tax reform will raise the U.S. capital stock by $5 trillion, causing national income to rise by $500 billion—equal to $3,500 per household.”

Democrats don’t understand economic growth and what causes it. They lost the election last year because blue-collar working people and the middle class saw that, and abandoned them. Are they going to make that same mistake again now, by standing against growth, jobs and rising wages?

Tax reform would cut taxes for virtually all taxpayers, not the rich, by nearly doubling the standard exemption to $24,000 for married couples, $12,200 for singles. That reduces the rate to zero percent for everyone paying the 10 percent rate today. It would cut tax rates for the middle class and working people to 12 percent, 25 percent and 35 percent. And it keeps the top rate of 39.6 percent for the top 1 percent earning over $1 million for married couples, $500,000 for singles. Eliminating the deduction for remaining state and local taxes is another tax increase on the rich.

Are Democrats really going to vote against all of that? Good luck trying to defend that to voters.

Peter Ferrara is a Senior Fellow at the Heartland Institute, and a Senior Policy Adviser to the National Tax Limitation Foundation. He served in the Reagan White House Office of Policy Development under President Reagan, and as Associate Deputy Attorney General of the United States under President George H.W. Bush. 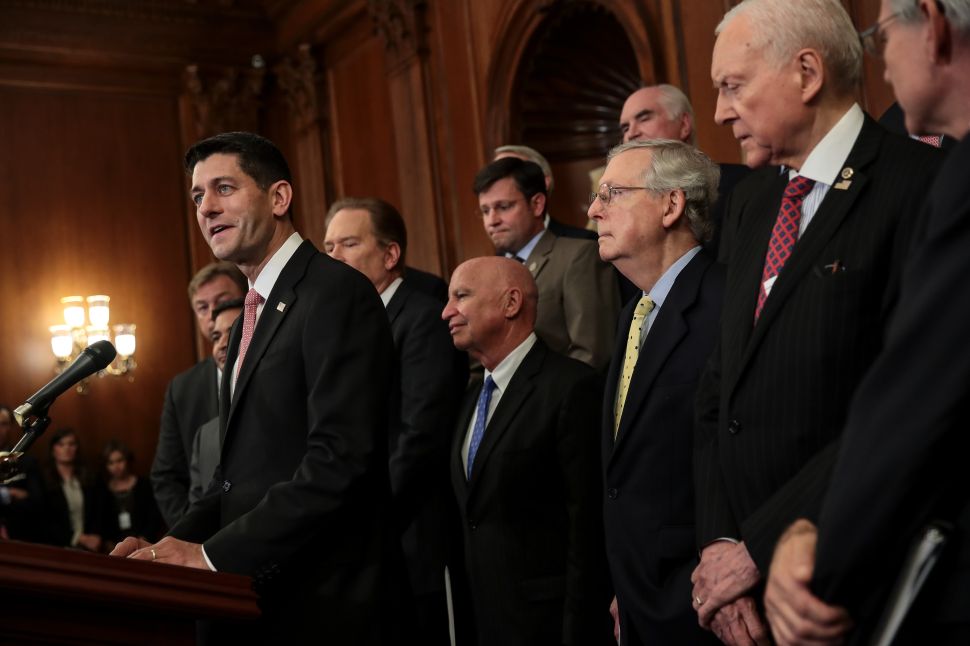