After losing the White House and failing to recapture either chamber of Congress in 2016, progressives found themselves consigned to outsider status with no real power in Washington. Desperate for anything that looked like hope, progressives have spent the last year convincing themselves, as many of them have done for years, that at some point the GOP’s “fever will break” and “principled” Republicans will abandon both Donald Trump and the party’s excesses.

This is a forlorn hope, but don’t tell that to the progressives who erupted into paeans of joy and praise every time a Republican occasionally broke ranks, even if only in words and not in deeds.

Remember when Sen. Jeff Flake (R-Ariz.) became every progressive’s favorite Republican because he began criticizing Trump and garnered even more lefty praise when he wrote a paltry $100 check to a Democratic Senate candidate (Doug Jones) running against a Republican (Roy Moore) accused of child molestation?

Flake may say a lot of statesmanlike-sounding things about Trump that progressives consider principled, but when the rubber meets the road, Flake is not an independent voice and certainly not an ally to progressives. He has voted in line with Trump’s position more than 90 percent of the time, supported all of Trump’s appointees, voted for the GOP tax bill, and voted for the proposed Obamacare repeal. Of the five occasions in which Flake voted against Trump’s position, two of those votes were in opposition to bills providing disaster relief to victims of hurricanes. The outpouring of lefty love for Flake in 2017 has been so sugary that one could develop political diabetes, but Flake has given progressives nothing but a few public criticisms of Trump and a $100 check. Seldom has love been bought so cheaply.

The image of Sen. Bob Corker (R-Tenn.) among progressives also has benefited from liberals’ willingness to forget everything else he may have said or done in the past in exchange for a few pointed barbs about Trump. But like Flake, he has been a largely reliable ally to Trump, voting with him about 85 percent of the time, approving all of his nominees, and also voting for the proposed Obamacare repeal. He was the one Republican senator who voted against the GOP tax bill, but of his remaining seven anti-Trump votes in 2017, two were in opposition to the bills that included aid for hurricane victims. He hasn’t even shelled out a $100 check to the Democrat in the Alabama Senate race, as Flake did.

It is a similar story with a handful of other Republicans who have criticized Trump and even on an occasion or two voted against a Republican priority. One sensed that liberals were ready to bestow sainthood on three GOP Senators—Alaska’s Lisa Murkowski, Arizona’s John McCain, and Maine’s Susan Collins—when they voted against an Obamacare repeal bill, preserving the program for the time being. But in the end, all three voted for the GOP tax bill, which included language that will gut Obamacare’s enforcement mechanism.

McCain’s vote was shocking to many due to his own struggles with life-threatening cancer, and progressives who hailed him when he voted against killing Obamacare turned on him in fury on social media outlets. But there shouldn’t have been any surprise: For all the talk of McCain as a “maverick” who bucks his party regularly, the fact is that he has been a staunch and doctrinaire conservative for his entire political career. His 2017 record of voting with Trump on nearly five votes out of every six is typical. McCain has rarely put his money where his mouth is. Ditto Murkowski (who has voted with Trump 86.7 percent of the time) and even Collins, whose reputation as a moderate is largely based on her statements rather than her 81.5 percent record of voting with Trump.

Collins’s vote on the Republican tax bill was either an exercise in mendacity or naiveté. She claimed that she had only gone along on that bill in exchange for an understanding that a bipartisan healthcare fix proposed by Sen. Lamar Alexander (R-Tenn.) and Sen. Patty Murray (D-Wash.) would be brought to the Senate floor. It became clear shortly after Collins’s vote that the Alexander-Murray proposal was not coming to the floor, which means either she was pretending to have been suckered, or she actually was.

There should be a lesson here. Progressives should never get too high on any Republican, because sooner or later, even if their words sound great, their actions will part ways with those fine-sounding words. After a year of progressive amnesia in 2017, one can hope that in 2018, the left will get over its dream of finding a few Republican saviors and start paying more attention to what these supposedly independent-minded GOP politicians do rather than what they say.

If easily excited progressives learn only one lesson from 2017, it should be this: talk is cheap. 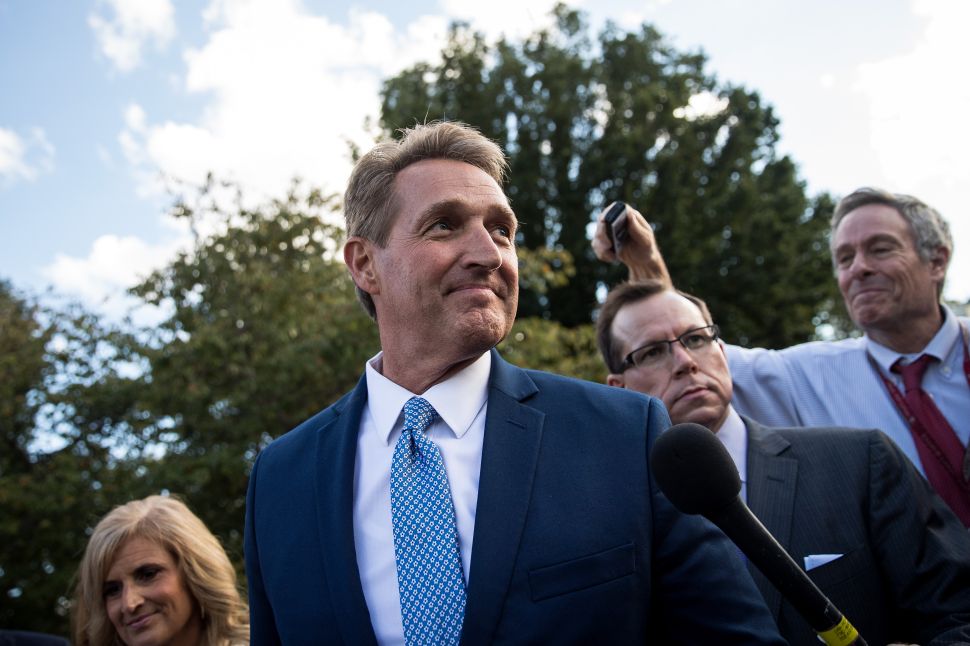