This week Rep. John Conyers, the longest-serving member of the House of Representatives, besieged by allegations of sexual misconduct, announced he is stepping down from the seat he has occupied for 50 years. Suggesting that his Detroit seat should pass to his son in dynastic fashion, the Michigan Democrat ends his public career under a cloud that shows no signs of lifting.

Multiple women have come forward with similar accounts of Conyers using his House position to run a harem of sorts for decades. With his resignation, the 88-year-old congressman cuts short inquiries into his rumored misdeeds in office. Some stories now appearing are alarming, none more than that proffered by Courtney Moore, now 36, who claimed that she was a 20-year-old college student when Conyers propositioned her for sex.

When Moore rejected his advances, she states, Conyers brought up the then-current case of Chandra Levy, a Washington, D.C., intern who disappeared mysteriously in the summer of 2001. “He said he had insider information on the case. I don’t know if he meant it to be threatening,” she told the Washington Post, “but I took it that way. I got out of the car and ran.”

The sensational Levy case was the talk of the town in our nation’s capital back in mid-2001, dominating local headlines in that long, last summer before jihadists took down the Twin Towers and America commenced its seemingly endless War on Terrorism. Chandra Levy, a pretty young intern, became a sensation after her disappearance. She belongs to a now-vanished age in Washington, swept away by 9/11, and her case remains as mysterious as on the day she disappeared: May 1, 2001.

The 24-year-old Levy had been working at the Federal Bureau of Prisons while completing her master’s degree. She left her apartment in trendy Dupont Circle in the early afternoon and seemed to fall off the face of the earth. Nobody saw or heard from her after May 1, and five days later her concerned parents in California called Washington police to report her missing.

Extensive searches brought up nothing. The police had no idea where to look. Her Internet searches shortly before she went missing included Rock Creek Park, which is close to Dupont Circle—and a place where women were at risk of assault, especially after dark. Chandra Levy was gone and nowhere to be found.

Her father mentioned to police that Chandra had been having an affair with a congressman. That turned out to be Gary Condit, a California Democrat who was married and had been in the House for a dozen years. Condit adamantly denied there was any affair—a claim that wasn’t widely believed—or that he knew anything about Levy’s disappearance. The latter assertion was more credible, since Condit had a solid alibi for when Levy went missing. The police never seriously considered the congressman a suspect in her disappearance.

Not that it mattered in the court of public opinion, which judged Condit harshly for having an affair with young woman half his age, then acting cagey about her disappearance. Condit turned out to have multiple lovers, which seemed at odds with his pro-family stances as a relatively conservative Democrat. His reputation was ruined, and Condit failed to win reelection to Congress in 2002, fading into obscurity.

After the 9/11 attacks removed the Levy case from the front pages, her disappearance went cold until her skeletal remains were found, by accident, in Rock Creek Park, in mid-May 2002, over a year after she disappeared. After so long outdoors, there wasn’t much for the police to work with forensically; it was determined that Levy was a murder victim, but her remains gave few clues as to what happened to her.

The case soon stalled for want of leads, and it took almost eight years for the police to make an arrest. Their suspect, Ingmar Guandique, a ne’er-do-well illegal immigrant from El Salvador, seemed a plausible fit. A known member of the notorious MS-13 criminal gang, Guandique was in town when Levy disappeared, in fact he missed work the day she went missing. Moreover, Armando Morales, who had shared a cell with the suspect when he was in prison on other charges, claimed that Guandique admitted he murdered Levy during a botched robbery.

This wasn’t much to go on, since prosecutors lacked any DNA or other hard evidence connecting Guandique to the crime, but they managed to get a conviction in November 2010, relying on circumstantial evidence plus Morales’ testimony, and Levy’s killer was sentenced to 60 years in prison. Levy’s father told the court he believed that Guandique was his daughter’s killer.

It didn’t take long for doubts to emerge, however, and the conviction gradually fell apart. Guandique was granted a new trial thanks to prosecutorial errors. Then, in July 2016, prosecutors announced that they would not proceed with another trial since they had so little evidence to go on. Morales, the jailhouse snitch who supplied the key testimony against Guandique, turned out to be a liar and fabricator. Guandique was a free man, but unwelcome in the United States. In May of this year, 16 years after Chandra Levy disappeared, Ingmar Guandique was deported back to his native country.

Who, then, killed Chandra? From the beginning there were whispers that there was a lot more to this case than the police or media let on. I was working in counterintelligence for the National Security Agency at the time, and I heard the whispers too. They centered on Condit’s political life. He was a senior member of the House Permanent Select Committee on Intelligence, the powerful oversight committee for our spy agencies. HPSCI members are cleared to know pretty much all the Intelligence Community’s secrets. As such, they are obvious targets for exploitation by foreign spies.

It wasn’t difficult to imagine that a guy with zipper problems like Condit could have easily gotten himself into a jam and wound up doing things he regretted. This would also explain why Condit, despite having nothing to do with his lover’s death, refused to talk about the case and gave evasive answers to simple questions. He hinted at illicit shenanigans in his semi-memoir, published last year, in which he gives his side of the Levy case. One of its stranger passages was noted by a reviewer:

Condit recounts attending the World Economic Forum at Davos, Switzerland, where he was seated near a Russian woman he describes as “very pretty” with “brown hair and fair skin that melted into her white dress.” They conversed, and then she prepared to take a taxi to her hotel.

“I’ll have the driver drop you off first,” he offered.

Then, the book says, “She got out of line and followed him to the town car.”

The scene ends there.

Is Condit trying to tell us something here? It doesn’t take much imagination to see what possibly—just possibly—might have happened to Chandra Levy. Let’s say you’re working for a foreign intelligence agency in Washington and, miraculously, you’ve managed to strike up a relationship with a powerful member of Congress. Even better, he’s a member of the HPSCI and he has access to valuable spy secrets. This is your career-making golden source.

But there’s a catch. Your would-be star has lady problems. Lots of them. One of his mistresses—the young, naïve, pretty one who thinks she and the congressman have a long and bright future ahead of them—is making noises about exposing him or making him pay for not taking their relationship seriously. You find out about this because, of course, you have the congressman’s phone tapped and you intercept the young lady’s increasingly hysterical calls. What would you do to protect your golden source?

This sort of speculation wasn’t hard to find in counterintelligence circles back when the Levy case was in the headlines, and it’s never completely gone away. When Guandique walked on the murder rap on appeal, the whispers popped up again. But there wasn’t any energy in Washington, to reopen a mostly forgotten murder case that might expose unpleasant secrets about the corridors of power in our nation’s capital.

However, the John Conyers story has put Chandra Levy and her unsolved killing in the news again. Perhaps the aging lothario was merely trying to impress—or intimidate—a young lady by claiming to know what happened to the missing intern. Or maybe he was telling the truth. Given Conyers’ own longstanding ties to Moscow and its intelligence services, which I exposed in a recent column, it can’t be ruled out that he possesses knowledge that would be of interest to the police and the FBI. Somebody should ask him. 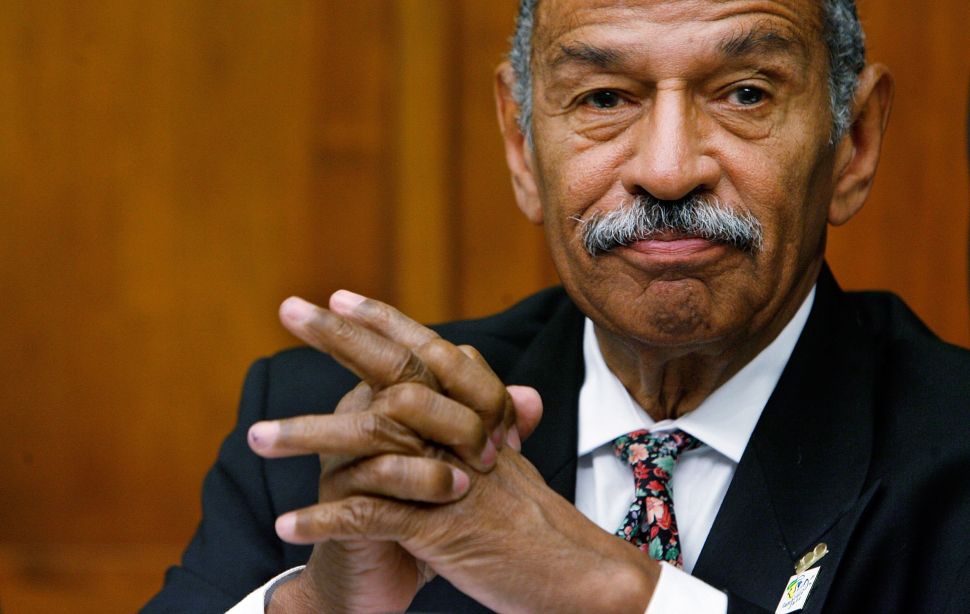