Most everybody made the mistake of filtering Roy Moore through their biases and ideology.

To the “Martha-at-the-Yamaha-keyboard loblolly piny-woods Baptist” (hat tip, Tom Wolfe), he was Daniel in the lion’s den.

To the democracy-dies-in-darkness people over at the Washington Post, he was the High Sparrow who would use the power of inquisition to atone for blasphemy.

Donald Trump, instead, saw Moore as a Senate seat in an equally divided chamber. Trumpism is decision-making based on practicality, not ideology. The practical impulses of Trumpism would do whatever was necessary to hold the Senate seat.

That is why Trump endorsed Luther Strange in the Republican primary. As he explained in a radio interview: “Luther Strange is going to be a great Senator. He loves Alabama, he loves the state, and he loves the country. He will absolutely win against the Democrat. Ray (sic) will have a hard time. If Luther wins, the Democrats will hardly fight. If Ray wins (Democrats) will pour in $30 million.”

When the host pointed out that Moore’s first name was Roy and not Ray, Trump said it’s “not a good sign” when the president makes that mistake. He continued, “Roy Moore is going to have a very hard time getting elected against the Democrat. Against Luther, they won’t even fight.”

Too much of the commentary leading up to the election had Trump abandoning his clearly expressed practical impulses to endorse Moore’s world view. He was careful not to do that.

He campaigned for Moore in Pensacola, Fla. and not in Alabama.

On the sexual assault accusations, he counseled caution, as he himself has been the victim of some nasty political humdingers, most notably about prostitutes peeing on a bed in Russia.

On the dire and apocalyptic Christian stuff, Trump has always said that religious folk are marginalized and ridiculed in America. They are some of the “forgotten people” Trump seeks to represent.

As I wrote here on December 1, it was a strategic failure of epic proportions to put the president in the position of having to support Roy Moore. Whoever is responsible for that fundamentally misunderstood the industrial Midwestern coalition that elected Trump.

When Trump defeated Ted Cruz in South Carolina, it marked the end of the evangelical wing’s dominance in the Republican Party.

Their itinerant-pastor-in-search-of-a-congregation ethic that preached Armageddon raised oodles of money, sure, but it was singularly ineffective in creating political coalitions that won anything. Like, for instance, Pennsylvania, Ohio, West Virginia, Michigan and Wisconsin.

They are the sons and daughters of the faith traditions that built, funded, and staffed their own parish schools because too many Roy Moore-ish religious beliefs were making their way into public education.

They have always thought it a good idea that the Constitution prohibits the establishment of state religions. They do not think that America is somehow ordained by God for a biblical purpose.

They believe their church, and not the state, has a divinely ordained mission. They appreciate above all else that the state guarantees them the right to pursue this mission freely.

The more intellectual of them understand that the Jeffersonian quote Moore inscribed on his Ten Commandments monument, “The Laws of Nature and of Nature’s God,” was an expression of the author’s Deism and did not incorporate Judeo-Christianity into the founding documents.

They long ago walked away from Glenn Beck for his embrace of such sophistry.

They know guys like Trump: the real estate developer with the big house on the hill and lots of money who is brash in all things but who they’re glad to see at the Church fundraiser even if they do not see him in the pews.

He’s the guy you want if you’re building a shopping plaza or if you need a ringer for the Knights of Columbus best-ball golf outing.

Perhaps voters in Alabama did Republicans a favor. Had Moore won, Trump would have spent the next three years dealing with it.

Once in the Senate, Moore would have faced an ethics investigation that pivoted upon forensic testing of the ink in that yearbook inscription. If the ink was 40 years old, then Moore would have been contradicted in one of his defenses on the assault of a minor.

Consider for a moment what that ridiculous news cycle would have looked like.

If the ink showed a recent forgery, then Moore was Daniel in the lion’s den all along. Which would have almost been worse, because then the huckster would have been able to cast himself as the prophet who defeated the Philistine.

Could you imagine how much more politically ham-handed Moore and his cowboy hat and his horse “Sassy” would be with actual vindication?

Roy Moore has been expelled from two offices in his life for disciplinary reasons. Maybe he was not the person to run for the U.S. Senate in an equally divided chamber in an otherwise reliable Republican state. Just sayin’.

Once he won the primary, the right move was to work to hold the seat.

Having failed in that, it is best to learn a big lesson: Trumpism is not the long-awaited Rapture. It is, instead, the political expression of the tastes, sensibilities, concerns, and religiosity of the Rust Belt.

Trump always knew that, instinctively. He was put in a bad spot here by people who think they know better. 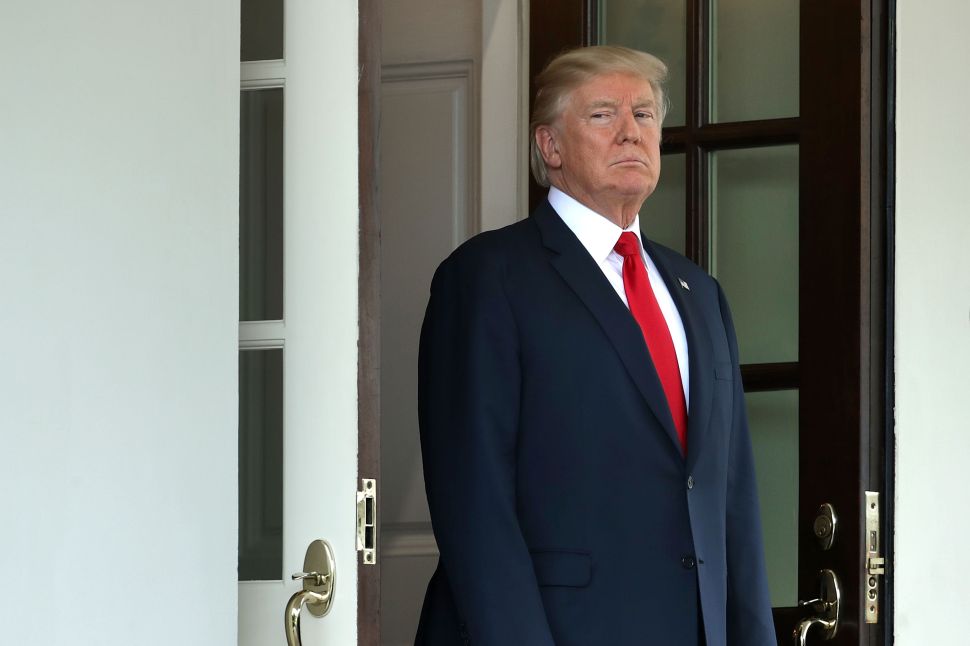