President Donald Trump’s decision to recognize Jerusalem as Israel’s capital should not be controversial. On the contrary, it may well have a surprisingly positive effect on the region, and become the vehicle that breaks the logjam which has blocked progress in the pursuit of a solution for the Israeli-Palestinian conflict.

Our president is threading the needle.

There is a myth that needs to be busted regarding the United States and Jerusalem. This declaration made by President Trump is neither new nor groundbreaking. The United States already recognizes Jerusalem as the capital of Israel. The myth centers around a Congressional Act during Bill Clinton’s presidency.

In 1995 Congress voted on and passed a law called The Jerusalem Embassy Act, which clearly articulates that the United States recognizes Jerusalem as the capital of Israel.  The Jerusalem Embassy Act passed by an overwhelming majority; the Senate vote was 93 to 5, and it passed the House with a 374 to 37 vote. Jerusalem is clearly a bipartisan issue, supported on both sides of the aisle. Few acts pass with such an overwhelming majority.

Announcing that the U.S. recognizes Jerusalem as the Israeli capital is simply a restatement of what has been U.S. law since 1995. The Jerusalem Embassy Act was so important at the time it was passed that Congress built in a three year grace period over which to make the move. After three years, the president would have to explain why the move did not happen. That is what the infamous “waiver” is all about.

Congress took the embassy issue very seriously and proved it by adding teeth to the law: If the embassy was not moved by 1999, the State Department will be docked 50 percent of its annual budget for international upkeep and development. The United States even purchased the land on which to build the embassy—a parcel of “no man’s land” in Jerusalem’s TalpiotArnona neighborhood, near the old Diplomat hotel—and have built a sprawling facility.

Almost every president and presidential contender since 1995 has promised to move the embassy. Everyone, with the glaring exception of President Barack Obama.

Over the past few weeks, as it became more and more likely that President Trump would make a Jerusalem announcement, warnings and threats of short term, violent flair-ups arose. One even called the announcement a declaration of war. In the end, it will only be a blip on the larger landscape. At least, that is the Trump plan.

And here’s a news flash: Jerusalem is the capital of Israel even if almost every country in the world chooses not accept that fact. Jerusalem is the seat of the Israeli parliament, of the supreme court of Israel, and of the executive branch of the government since December 1949 and January 1950. Jerusalem is home to the president and prime minister of Israel.  Yet, somehow, Israel has been denied the right to declare their capital and have it recognized by her friends and allies—not to mention her enemies.

Historically, the United States has been afraid of possible blowback on the issue of Jerusalem. Jerusalem is the only city in the world with two U.S. consulates. One is in East Jerusalem that was under Jordanian control until June of 1967, and one in West Jerusalem. Once upon a time Berlin had two embassies, but they were in two different countries and were unified after the wall came down. The Jerusalem consulate is the only consular office in the world that reports directly to Foggy Bottom and not to its own embassy.

Everyone has something to say about Jerusalem. Of late, some serious proposals have been raised—most notably, one put forth by Saudi Arabia. The Saudi proposal is a re-do of their earlier proposal, and is similar to a plan recommended by the United States and others. Because it comes from Saudi Arabia, the Palestinians are taking it seriously.

Regarding Jerusalem, the Saudi plan suggests that Abu Dis be named the Palestinian capital. Abu Dis is located just under the Mount of Olives. It is closer to the Temple Mount and the Dome of the Rock than the Knesset, Israel’s parliament.

In 2000, while Yasser Arafat was still alive, work began to build the Palestinian’s parliamentary building. I toured the site while it was under construction and was most impressed by Arafat’s Presidential Office Suite. He had a perfect view of the Dome of the Rock not only from his office, but even from a narrow, floor to ceiling, window in the private presidential powder room.

According to the demarcation in the Oslo Accords, Abu Dis is in “Area B,” meaning it is under Palestinian Authority civil control and Israeli military control. Abu Dis is really Jerusalem—but not. The name Abu Dis is an Arabic perversion of Abu Deus. Abu in Arabic means “father of,” and in this case Dis is “Deus” which means God in Latin. It is the area where Jesus spent the last few days of his life before his arrest by the Romans.

Certain Arab leaders have concluded that Abbas cannot make a decision about Jerusalem because he will lose control—hence the threat of violence as a way to save face. But maybe if a proposal about Jerusalem was floated by representatives of the large mainstream Arab countries like the Saudis and the Egyptians and Trump, the issue could be resolved with no honor lost.

Right now the Palestinians want to garner Arab and Muslim support. The timing of the waiver signing fits perfectly into their agenda. Now they can use a statement on Jerusalem by President Trump to orchestrate international condemnation of Israel and the United States. The problem is that anger and hate are not replacements for a real commitment to create a genuine Palestinian state. A Palestinian state needs to be built on a creative dream, not on hatred and protests against Israel. 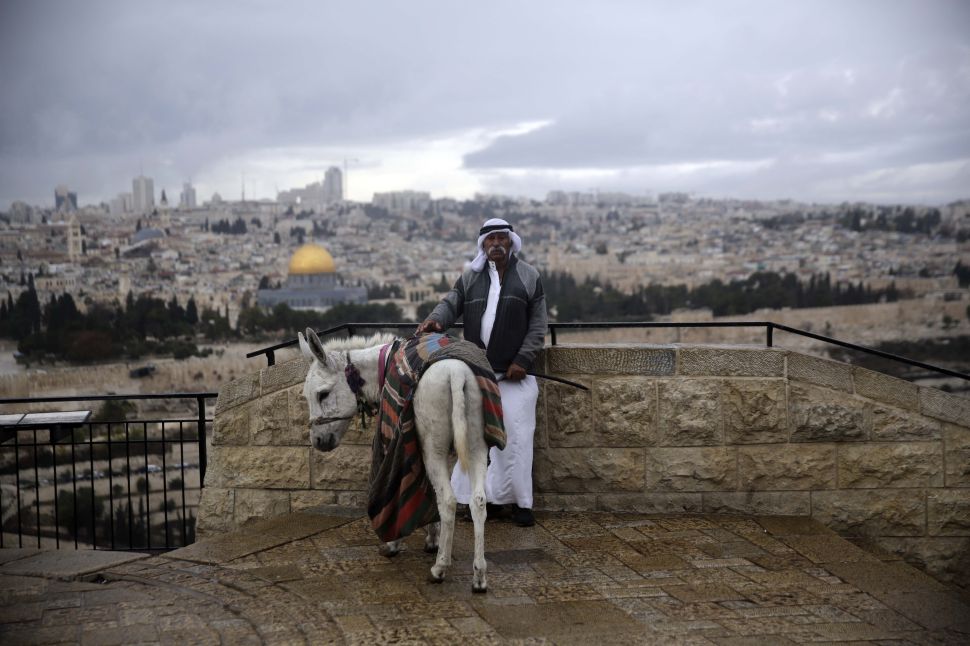