Eminem continues his reign as the top-selling hip hop artist of all time with his new album Revival.

The record marks Eminem’s eighth consecutive No. 1 album on the Billboard 200 chart, according to THR. It earned 267,000 equivalent album units in the week ending December 21, per Nielsen Music. Of that total, 197,000 came in traditional album sales. Eminem is now the first-ever artist to notch eight straight No. 1 album debuts.

What’s particularly interesting about Revival‘s blast off in sales is that it comes at a time when Eminem is at his most divisive. Always a lightning rod for controversy, the rapper has become increasingly political in recent months with frequent attacks on Donald Trump. Over the summer, he led a “Fuck Donald Trump” chant at the Reading Festival. In October, Eminem’s “The Storm” BET Cypher Freestyle went viral with its take down of the Commander in Chief. In it, Eminem challenged his fans to pick a side, rapping:

“And any fan of mine who is a supporter of his/ I’m drawing in the sand a line, you’re either for or against/ Or if you can’t decide who you like more and you’re split/ On who you should stand beside, I’ll do it for you with this/ Fuck you”

Revival even features a song, “Like Home,” explicitly aimed at the president. On it, Eminem compares Trump to the Aryan Brotherhood, bashes Fox News for their support of the GOP and insults the president’s appearance. The artist’s takes have drawn some criticism from right-leaning fans, though his polarizing lyrics have not slowed the album’s growth. According to THR, “The Billboard 200 chart ranks the most popular albums of the week in the U.S. based on multi-metric consumption, which includes traditional album sales, track equivalent albums (TEA) and streaming equivalent albums (SEA).”

Revival scored the third-biggest week of 2017 for a hip-hop album in total units and album sales behind only Kendrick Lamar’s DAMN and Drake’s More Life. With eight No. 1s on his resume, Eminem is now tied with Kenny Chesney, Madonna and U2 for the sixth-most “leaders in the history of the chart.”

Politically charged commentary has done wonders for the television ratings of Stephen Colbert’s The Late Show and ABC’s Jimmy Kimmel Live. Perhaps we shouldn’t be surprised that it should do the same for music. 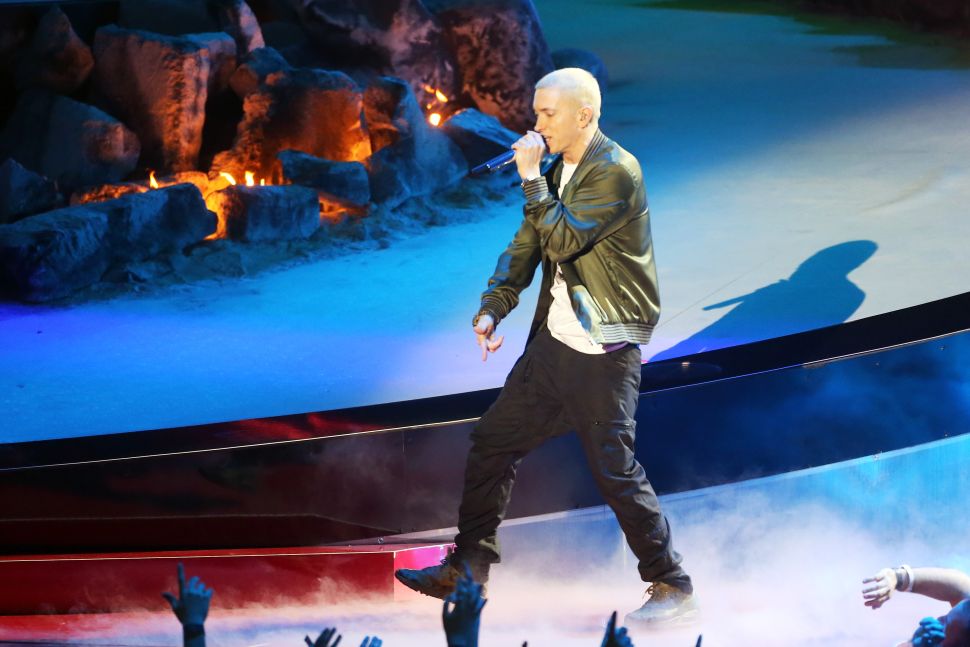