New York Attorney General Eric Schneiderman has taken legal or administrative actions against President Donald Trump and the congressional GOP 100 times since Trump first took office, according to a report.

Schneiderman has sued Trump over his executive orders barring entry to people from Muslim-majority countries, his attempts to repeal former President Barack Obama’s Affordable Care Act and his decision to terminate the Deferred Action for Childhood Arrivals program for undocumented youth brought to the United States in their early childhood, among other issues.

By deciding to sue the Federal Communications Commission to protect “net neutrality” rules established under Obama in 2015, his office took its 100th action against the Trump administration and Republicans in Congress.

“We try and protect New Yorkers from those who would do them harm,” Schneiderman told the New York Times. “The biggest threat to New Yorkers right now is the federal government, so we’re responding to it.”

Trump and Schneiderman have frequently butted heads over the years.

In 2o13, Schneiderman filed a $40 million fraud case against Trump on the grounds that he violated state education laws by making it seem like Trump University, his unlicensed real estate seminar program, was a real university. In November 2016, Trump was ordered to pay New York State $1 million in penalties as part of a $25 million settlement sorting out pending suits against the program—shortly after he won the presidential election.

In October 2016, the attorney general sent a cease and desist letter to the Donald J. Trump Foundation amid reports that the foundation did not have the necessary licensing to raise money in the state and used donor funds to settle personal lawsuits against Trump, and to buy portraits of him at charity auctions that he used in his business properties. In 2015, Schneiderman’s office kept Trump from closing his foundation before coming into office because of an ongoing probe into the endowment.

In June, Schneiderman was said to be investigating issues highlighted in a Forbes report alleging that the Eric Trump Foundation used an annual charity golf tournament to benefit the family’s business. And at the end of August, it was reported that Special Counsel Robert Mueller was collaborating with Schneiderman on its investigation into former Trump campaign chairman Paul Manafort’s lobbying and financial dealings.

Other prominent attorneys general are similarly taking action against Trump, including California Attorney General Xavier Becerra, who has devoted budget funding specifically to fight the Trump administration’s actions and policies, according to the Times. Maura Healey, the Massachusetts attorney general, also told the Times that they “don’t have a stronger or smarter ally,” referring to Schneiderman. 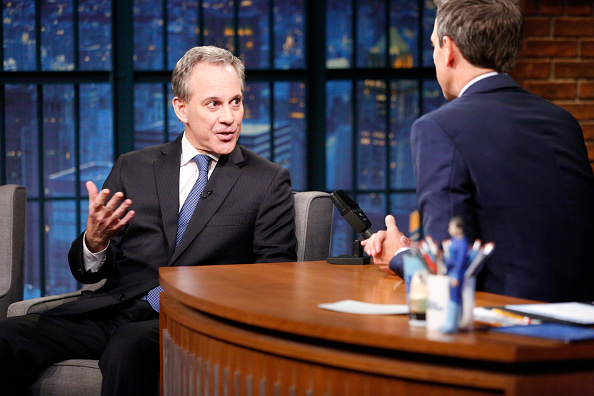