Whether you’re looking for somewhere different to celebrate this holiday season or plan on making reservations for the next royal wedding well in advance, there are plenty of tea party options in New York. While The Plaza is always a solid choice (especially if you want to drink and dine like Queen Victoria) there are some lesser-known spots worthy of their own tea time, as well as other quaint hotels that offer specialty sandwiches and scones. That’s why Yelp compiled a list for Observer, ranking the best places to get high tea in New York, ranging from an Upper East Side townhouse to a West Village specialty shop.

Yelp looked at the businesses in the tea room category that had a large concentration of reviews mentioning high tea and afternoon tea, and then ranked them on a variety of factors, including the total volume of ratings.

Topping the list was Bosie Tea Parlor in the West Village, a tiny, charming destination with 100 varieties of tea. Bosie Tea Parlor was also the only New York spot to make the national list, coming in at number eight. While they offer a full menu, they’re best known for their elaborate tea services. The most luxe of those services, which must be reserved 48 hours in advance and is only available for parties of two or more, is certainly fit for a Queen. It entails two glasses of  Perrier-Jouët Brut Champagne and canapés with quail eggs, black truffle and smoked salmon, which vary depending on the season. But the pièce de résistance is the dessert, which includes four macarons—one of which is made with 25-year-old aged balsamic.

Alternatively, you can put on your best Blair Waldorf-inspired headband, clutch your pearls and head to the UES, since the majority of the top choices were on the Upper East Side. And if you’re in the mood for a tea crawl, simply stop at all of them. Two E Bar/Lounge at the Pierre Hotel came in at number three, followed closely by King’s Carriage House in Yorkville (it’s hidden inside a townhouse), Pembroke Room at The Lowell Hotel was seven and the famous Alice’s Tea Cup Chapter II, based on Alice in Wonderland adventures, was ranked eighth.

The Parisian Ladurée Soho, a Gossip Girl staple known for its macarons, hit the list at number five, the Victorian Lady Mendl’s Tea Salon inside The Inn at Irving Place was six, BG Restaurant at Bergdorf Goodman was two and Rose House was 10—if you’re inclined to venture all the way to Flushing for high tea. Next year, Tiffany’s Blue Box Cafe will almost certainly make the list, as long as Yelpers don’t mind waiting in line. 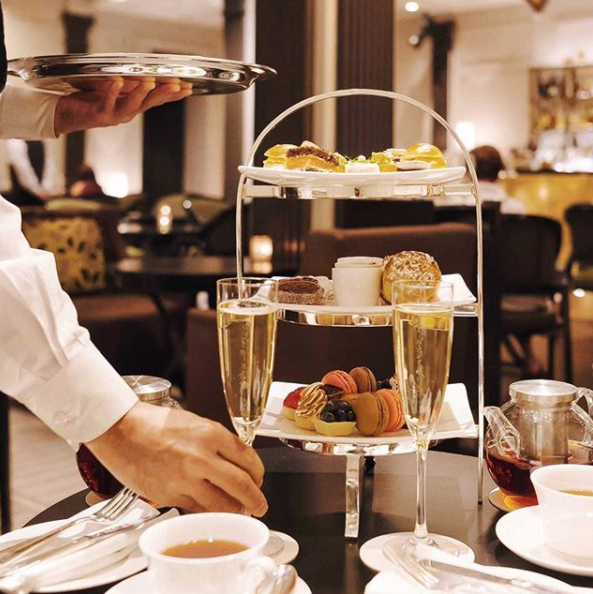