The tornado of Special Counsel Robert Mueller‘s Russia investigation has hit new turbulence. Deputy Attorney General Rod Rosenstein testified before the House Judiciary Committee on Wednesday to address a New York Times report that revealed how a federal agent tasked with investigating President Donald Trump sent disparaging text messages about his subject. Though Agent Peter Strzok was removed from the investigation last summer, more incriminating messages between Strzok and senior FBI lawyer Lisa Page were released to Congress and published by the Times on Tuesday evening.

“We are now beginning to understand the magnitude of this insider bias on Mueller’s team,” said Committee Chairman Bob Goodlatte (R-Va.) in his opening statement for Rosenstein’s hearing, citing “extreme bias” in several of Mueller’s investigators.

“How, with a straight face, can you say this group of Democrat partisans are unbiased and will give President Trump a fair shake?” asked Rep. Steve Chabot (R-Ohio) after reading off a list of campaign contributors Mueller’s staff allegedly donated to Democratic candidates. “I would submit the Mueller team ought to be attired with Democratic donkeys or ‘I’m with Hillary’ t-shirts … and I think it’s really sad.”

Despite the heated exchanges, Rosenstein defended his appointment of the special counsel and told the committee he has no intention of firing Mueller.

“I believe based on his reputation, his service, his patriotism, and his experience with the department and with the FBI, I believe he was an ideal choice for this task,” Rosenstein told the committee.

As Mueller’s probe crescendos in intensity, claiming former Trump campaign manager Paul Manafort’s indictment and a plea deal with the campaign’s former advisor George Papadopoulos, Republicans have escalated their attacks against the investigation. In early November, Republicans led by Florida Congressman Matt Gaetz introduced legislation demanding Mueller’s resignation. Gaetz confirmed to Politico on Tuesday night that he told the president the probe was “infected with bias.”

Armed with a trove of new ammunition, Republicans castigated Mueller’s conductor on the national stage. But with its passenger’s profiles heightened, the freight train barrels on—safety check be damned. 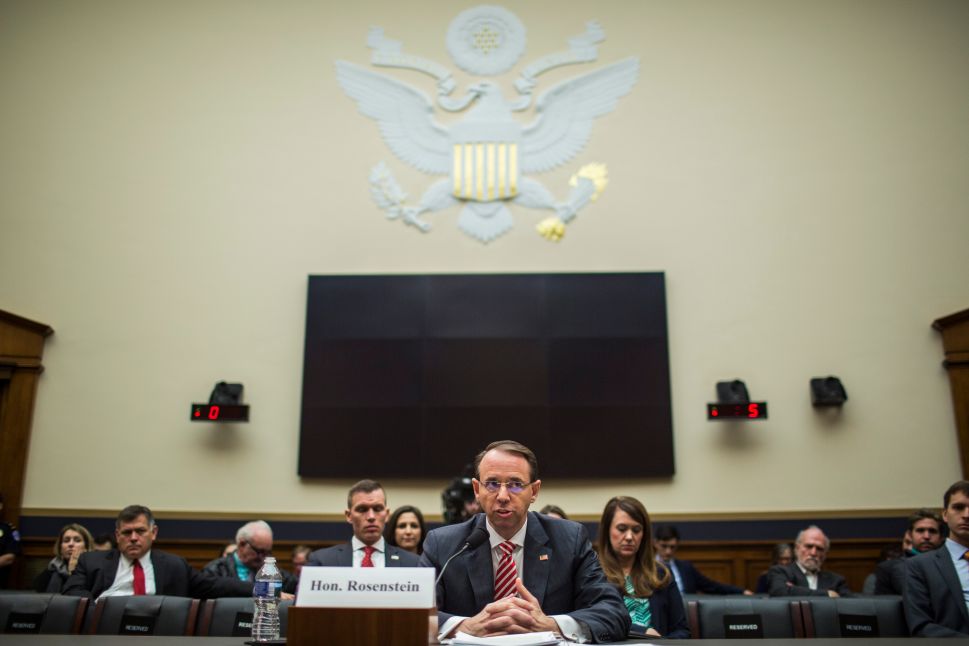