When Kate Middleton’s engagement was announced, the public closely followed along with her diet plan, a strict low-carb regimen. Now that Meghan Markle and Prince Harry’s wedding has an official date (and glamorous engagement photos), everyone will be watching the former actress closely to see if she opts for an equally intense diet plan to prepare for wedded bliss.

The Duchess of Cambridge was said to have used the Dukan Diet (Jennifer Lopez and Gisele Bundchen are both fans) to prepare for her wedding in 2011, which led to the diet’s creator weighing in negatively. “I think she lost too much,” Pierre Dukan told the Daily News in 2014. Dukan went on to say that Middleton went from having “good cheeks” to “no cheeks.”

The four-part diet is high-protein, low-carbs and involves pure protein, with a little fruit and cheese added in towards the end, depending on how much weight you lose. Kate Middleton’s sister Pippa and mom Carole were both said to be partaking, which would certainly explain Pippa’s insane wedding body. Post-wedding, the Duchess was said to enjoy a good curry, her grandmother’s chutney and raw foods.

Markle, on the other hand, has been open about her diet and workouts (she likes reformer Pilates, hiking and yoga). She used to share the details on her now-defunct lifestyle blog, The Tig, in addition to documenting her meals in detail on Instagram. The Suits star even chatted with Delish in October 2016 about her daily dietary choices, telling them “french fries and vino are my vices” and that she’s a sucker for a good rosé. She went on to share her diet menu, which will probably be how she prepares for the wedding.

When Markle was filming, the cleansing kicked in, although it’s not as extreme as the Dukan Diet. In the morning, she opted for hot with lemon, steel-cut oats, followed by salad and green juice for lunch (she called it “food-as-medicine”) and splurged on pasta with Parmesan cheese at night. She revealed when she’s on hiatus, she eats french fries whenever she goes out. And her best recipe is a slow-cooked zucchini pasta sauce that she makes into a “filthy, sexy mush.” It’s no engagement chicken, but hopefully, Prince Harry approves. 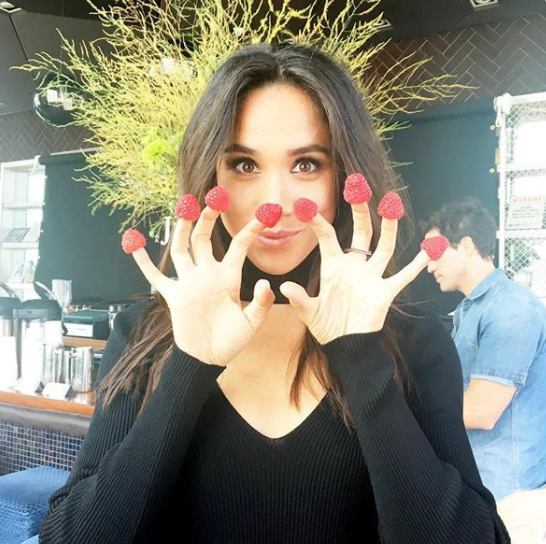