Hugh Jackman, in my opinion, can do no wrong, and when he does it all right, he does it better than anyone else. He’s made so many rotten movies to get rich that I’m afraid a lot of people have forgotten just how great he is. But when he and all of his assorted agents, managers and advisors agree to occasional returns to critical acclaim in sold-out London or Broadway stage musicals, it’s plain to see why he’s earned a reputation as the most dazzling, versatile, charismatic and enchanting performer since Fred Astaire. All the more reason why he seemed so right for the role of P.T. Barnum in an aptly titled movie musical called The Greatest Showman. And all the more disillusioning to discover that after seven and a half years in the making, it’s a dumb, dull, lackluster letdown. Hugh Jackman still does everything right. It’s the film that gets it all wrong.

The rags-to-riches life and career of circus pioneer and show business icon Phineas Taylor Barnum, beautifully and memorably immortalized in the great Broadway musical Barnum, always seemed custom-fit for the humongous energy and captivating charm of Hugh Jackman. When the movie was announced I felt secure in the knowledge that magic was on its way. What a double dose of disappointment it turned out to be. Set against the same circus backdrop that made movie history in The Greatest Show on Earth, material this colorful has its own unbeatable entertainment value, so there is no excuse for the pedestrian direction by first-timer Michael Gracey, the weak, ho-hum screenplay by Jenny Bicks and Bill Condon, the gaudy cinematography by Seamus McGarvey or the noisy but undistinguished score. Twentieth Century-Fox is spending millions to promote and market it, and I’m sorry to report it’s not worth the hype or expense.

The screen is cluttered with ten new songs by the woefully mediocre and bafflingly overrated songwriting team of Justin Paul and Benj Pasek, who won undeserved awards for the movie La La Land and the play Dear Evan Hansen. Nothing they’ve provided for The Greatest Showman comes close to the beauty and excitement of the Cy Coleman songs from Broadway’s Barnum. Why didn’t Gracey just make a movie version of that? Instead, we get repetitious choruses of contrived tunes that all sound so much alike that after a while you can’t tell one from the other, and only a few of which are performed by Jackman at all. The best number, the familiar sounding “From Now On,” is staged on high-wire tightropes without much flair by a bland Zac Efron, who makes no impression at all as Barnum’s business partner Philip Carlyle, even when his family disowns him for having an interracial affair with a trapeze artist, played indifferently by a newcomer named Zendaya.

To make room for all the boring songs, historic facts are all but eliminated, leaving only the bare bones of Barnum’s life. A penniless tailor’s son with a vivid imagination, he wastes his talents in a dreary factory that makes nuts and bolts, while encouraged by his socially superior but devoted wife to follow his fantasies of fame and fortune. After finding success, his famous museum of hoaxes and oddities burns to the ground under mysterious circumstances, forcing Barnum to start over, move to a tent, and begin the life-long affair between the public and the elephants that symbolized the circus.

There’s very little drama, and too much music. Whatever action or emotion there is in the plot is articulated through song lyrics instead of spoken words: “Every night I lie in bed/The brightest colors in my head…A million dreams are keeping me awake/A million dreams for the world I’m gonna make.” After lying about phony collateral to get a bank loan, Barnum opens a “museum of wonders” featuring wax figures, but the people don’t come. Then he adds human oddities, making stars out of social rejects the horrified but curious critics and customers label “freaks” but cannot get enough of—a bearded lady, a hairy dog boy, a little person called “Tom Thumb”and a pair of conjoined twins. (All better played and displayed in the fabulous cult Broadway musical Side Show.) That’s about it, except for occasional forays into Barnum’s personal life, i.e. an ongoing feud with acerbic critic James Gordon Bennett (Paul Sparks), a lumbering affair with international singing sensation Jenny Lind (Rebecca Ferguson), and a sketchy attempt to bring back into frame, from time to time, Mrs. Barnum (a wasted Michelle Williams). All of which leaves Jackman pretty much on his own, doing what he can to breathe some verve and wit into a cardboard poster.

Jackman captures the vision and spirit of P.T. Barnum, and I liked some of the foot-stomping choreography, too. Still, the material does not serve him well, nobody makes much of what you might call a lasting impression, and The Greatest Showman is anything but. The most welcome cast members are the pachyderms who carry Barnum on their backs to beat the New York traffic and inform the film’s most endearing talisman to live by: When in doubt, bring on the elephants! 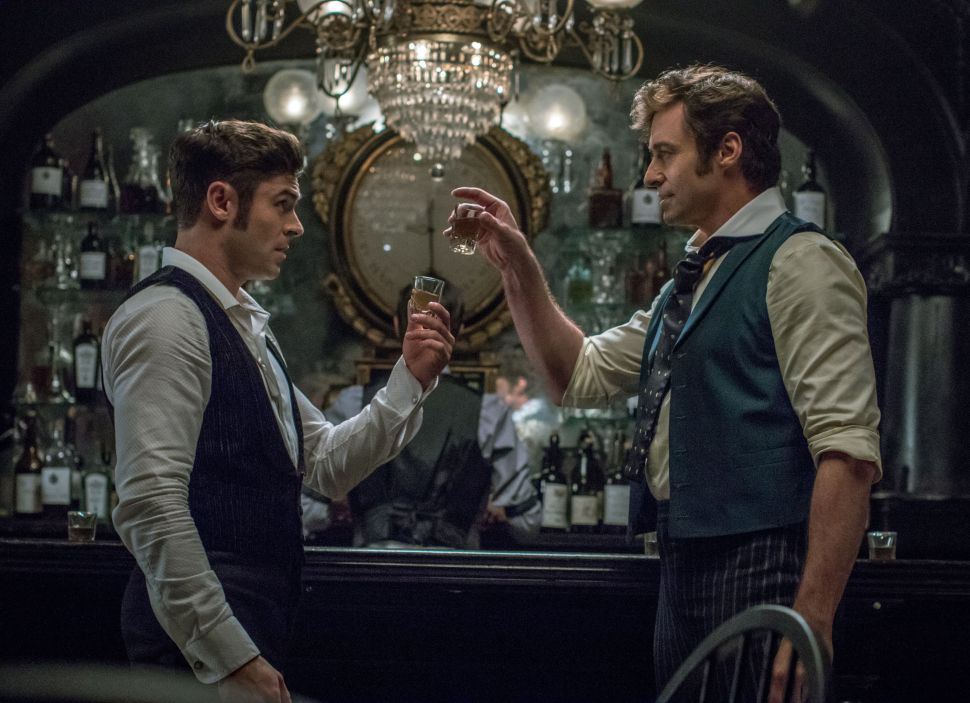