Arthur Washington Lithgow III (1915-2004) was a theatrical pioneer who probably functioned just outside your purview—something of a Johnny Appleseed of the American stage, who, decades before Joe Papp laid siege to the Delacorte, created Shakespeare Under the Stars in Yellow Springs, Ohio, and cultivated it till it became The Great Lakes Shakespeare Festival in Lakewood, Ohio. Occasionally, he’d swap his director’s hat for a plumed cap and play Petruchio to Nancy Marchand’s Kate.

He worked at Vermont’s Brattleboro Center for the Performing Arts and Tampa’s University of South Florida; upstate, he co-founded the Ithaca Theater Guild. The closest that he ever came to Broadway was Princeton’s McCarter Theater, which he ran from 1963 to 1971, punctuating the established classics with original plays.

Well, actually, he came closer than that. He is best known for siring and fostering one of the finest, most frequent players on the New York stage today—his son, John.

That story went largely untold till nine years ago when Lithgow fils unveiled to some 20 friends in a rehearsal hall at Lincoln Center his very specific Life With Father, a solo show built around stories that his dad read to him growing up and that he, in turn, read back to his dad during his last days. The response of this select audience was more than encouraging. Jack O’Brien offered to direct it, and Lincoln Center’s artistic director, Andre Bishop, volunteered the Mitzi E. Newhouse on Sunday and Monday dark nights for a run in 2008. He’s been touring and polishing it ever since.

In the Broadway edition now previewing for a January 11 opening at the American Airlines Theatre, Stories by Heart has two stories to tell (three, really): P.G. Wodehouse’s Uncle Fred Flits By and Ring Lardner’s The Haircut—both lighthearted reads, but they are introduced with very poignant father-and-son underpinnings.

“The stories are completely different,” Lithgow is quick to point out. “Uncle Fred is British, The Haircut is American. In the first, I play ten different characters. The second is virtually a one-actor one-act play. They just fold together magnificently.”

Every single word of The Haircut is fittingly delivered by a barber, giving a shave and haircut to a stranger in town, a small Midwestern town in the 1920’s. “The story he tells,” says Lithgow, “is mostly about this character who has just died, but, bit by bit, it dawns on the audience just what the circumstances of his death were, even though it never even occurs to the barber—a fascinating little trick on the audience.”

In contrast, Uncle Fred is quite a parade of eccentrics, starting with the title one: “an outrageous flimflam artist who’s traveling with his quivering, timid nephew, Pongo Twistleton. They run into a battleaxe aunt, a tremulous young flower named Julia and Julia’s suitor that Wodehouse refers to as ‘the pink chap’—on and on like that. It’s a whole gallery of fabulous characters, culminating in a long scene where I play six, one of whom is a parrot. Basically, I do everything that I’m capable of doing.”

The Wodehouse piece was his father’s last request. “Reading that story out loud to my mother and father, when they were 84 and 86 years old, was one of the real seminal moments of my life. I vaguely remembered it from when I was a child, but none of the specifics. It exploded in my hands reading to them. The combination of trying to entertain my parents at such a key moment in their lives and discovering a fantastic piece of material at the same time really had a tremendous effect on me.

“I didn’t create the show for another four years after my dad had passed away, and I had never written anything for myself to perform—at least not at that level—but writing this came very easily. That one little moment, for me, was like my origin story as an actor. In so many ways, that’s why I act—just to have that kind of impact on an audience, to have it meaningful to them on some level—so I just sorta spun it into almost my own philosophy of entertainment. That’s what the show is about.”

Lithgow has gone far on “that one little moment.” His list of wins will knock your socks off: six Emmy Awards, two Tony Awards, two Golden Globe Awards, three Screen Actors Guild Awards, an American Comedy Award and four Drama Desk Awards. No Academy Awards or Grammy Awards to date, but he’s contented. All of that, plus he got the family name in concrete on the Hollywood Walk of Fame and in gold leaf on the American Theater Hall of Fame at the Gershwin Theatre.

And range! His Emmys reflect how wide that goes, running from extraterrestrial college professor Dick Solomon of 3rd Rock from the Sun to “Trinity Killer” Arthur Mitchell of Dexter to, just last September, Sir Winston Churchill of The Crown.

Churchill, the 72-year-old actor says, “was a dream job, one of my favorite jobs ever. It was eight months in England, and I only worked about a third of the time. When I did work, I was working with all these incredible people. My wife is a professor, and she took a sabbatical and joined me over there. It was like a junior year aboard.”

His work is done there, but the series starring Claire Foy (also an Emmy winner) goes on—since Queen Elizabeth II, now 91 and Britain’s longest ruling Monarch, insists on going on. “That was it for me. I wrapped my last scene a year and a half ago. I’m not in season two, save for a little flashback that was shot two years ago. I’ve actually just finished watching the first four episodes of the new season, and I watched it wistfully, seeing all my friends better than ever. It’s an amazing series.”

This could be the year when Churchill triggers another award—to Gary Oldman, the current Oscar front-runner for Darkest Hour. Lithgow checked him out: “I thought he was great, and I was very relieved that I could see it with no discomfort at all. He was very different from me. It was a different era and a different story. It was like seeing somebody else play King Lear after you’ve played it. It’s not that I own the role, nor do I feel like I do. I thought he was just remarkable. I didn’t want to see any other Churchills while I was acting myself. The only person I saw play Churchill was Albert Finney in The Gathering Storm. He was equally good and equally different. We’re all confined by our own bodies and voices and mannerisms. There’s no changing that, so, automatically, your performance will be different from theirs.”

Another déjà vu expedition was to the Cort where he and his Tony-winning co-star, B.D. Wong, saw what Julie Taymor had done with their M. Butterfly 30 years later.

John Dexter, who directed the original version, offered the lead to Brian Dennehy before he saw Lithgow audition and had to back-paddle like hell after he did. (Lithgow justified the choice with Tony-nominated work). “I remember Brian and Ed Herrmann and I all auditioned the same day. He’d had supper with me the night before. I think he wanted some feeling of all of us, so maybe we were auditioning without knowing it when we were having supper with him in his hotel room.”

Stories by Heart is arriving on Broadway with a different director since O’Brien can’t very well get off his Carousel at the moment. Dan Sullivan, who directed Lithgow in The Columnist, King Lear and Retreat from Moscow, has stepped up to the plate.

“They’re both very good friends, and they were both very gracious about it. Jack gave us his blessing, and, in a sense, it’s co-created by all three of us. When I asked Dan to do it, I said, ‘Dan, with any luck, you’ll be doing less directing than you’ve ever done in your life,’ because I’ve already done this thing for about nine years.”

It was important for Lithgow to get someone who’d never seen the show before, “who’d look at it with a completely fresh eye and with whom I had a real shorthand,” he said. “We’re only getting five days of rehearsal. I just wanted a quick look in from Dan, but I’m getting a lot more than that. He’s very meticulous. He’s got a great sense of structure.

“I was doing a movie up in Rochester during September, and I flew down for a day just to perform the entire show for him—for him and about 20 people, mainly Roundabout staff—in a rehearsal room, just so he could see the flow of it. It’s one thing to read it, but I wanted him to see it. And, sure enough, he saw it, and we had a five-minute talk, and I went right home and rewrote the first 15 minutes of the show. He had wonderful notes. He says very, very little, but it’s all very, very useful.”

After its Off-Broadway lift-off, Lithgow peddled Stories by Heart to 35 cities until it now shines, as Dorothy Loudon said in Annie, “like the top of the Chrysler Building.”

“I’ve been to Galveston and Reno and Pittsfield and Lexington and St. Louis and Lawrence—cities I’ve never been to before—but I did revisit places like the McCarter Theatre and the Great Lakes Theater Festival where I performed years ago, so, in some way, it was getting in touch with my past and people from my past.”

The size of a Broadway house for such an intimate show isn’t remotely intimidating for him. “Bring it on. By now, I’ve performed this in 2,000-seat houses and for ten people in my living room—and everything in between. That’s the great thing about taking a show on the road. I can perform it on the phone and make it entertaining.

“I have not wanted to do it on Broadway until now. I feel now’s the time. I’m getting old, and it’s not an easy show to do. I have to do it while I still have the strength and energy. Roundabout came to me with this beautiful slot—a ten-week run. I’m not at all sure how much longer than that I’m capable of doing it eight times a week.”

You certainly can’t say that John Lithgow never sang for his father. Without any musical flourishes at all, this monologue somehow manages to be a love song.

New Yorker Haun is a veteran theater journalist. He profiles actors, playwrights and living legends of the Broadway world. 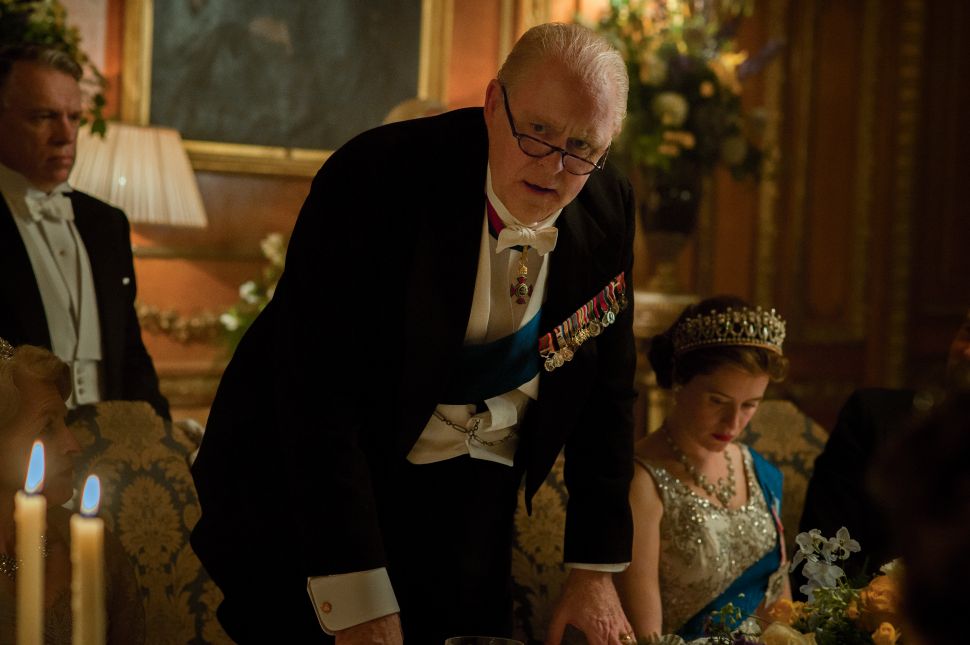