Nadler is replacing former Rep. John Conyers (D-Mich.), who resigned after a series of sexual harassment allegations. If the Democrats win back the House in 2018, Nadler would become the head of the panel that would handle impeachment proceedings against Trump.

In a statement, Nadler said he would fight to protect the rule of law, strengthen the United States’ safety “from enemies foreign and domestic” and guarantee that all people are treated fairly and equally.

“This is a critical time in our nation’s history, and the work of the Democrats on the Judiciary Committee is more important than ever,” he said. “Our efforts — to hold the Administration and those wishing to turn back history’s long arc towards justice accountable — are central to the defense of progress and democracy.”

He said that in his new position, he will “do everything in my power” to fight for justice and that every other member of the committee has to do the same. Although he did not speak about possible impeachment proceedings, he did say that he has a responsibility to hold Trump responsible for his actions.

“It is our obligation to be steadfast in working for criminal justice reform, to be vigilant in protecting women’s rights, including the right to an abortion, promote greater equality for members of the LGBTQ community, to demand action on common sense gun laws, to support consumers and oversee antitrust concerns, and to hold the Trump Administration accountable for its destructive policies and unprecedented misconduct,” Nadler continued. “This committee has a responsibility to uphold our laws and ensure justice.”

Nadler and Lofgren have been competing for the position for months, according to Politico. The election was supposed to take place after the November 2018 midterm elections, but the resignation of Conyers led to the vote occurring earlier than anticipated.

Nadler is not the only New Yorker to rise up in the House.

In November 2016, Rep. Joseph Crowley (D-Queens/Bronx), who also heads the Queens Democratic Party, was elected as chairman of the House Democratic Caucus, making him the fourth-ranked Democrat in the House of Representatives. He is also said to be eyeing House Minority Leader Nancy Pelosi’s seat.

A month later, Rep. Hakeem Jeffries (D-Brooklyn), Brooklyn’s youngest congressman, was elected to one of three co-chairmanship positions atop the Democratic delegation’s Policy and Communications Committee. 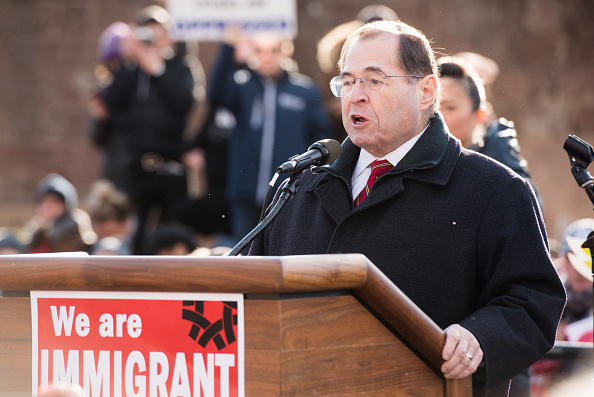