Sen. Kirsten Gillibrand, one of the leading voices in the Senate fighting sexual assault, said President Trump should “immediately resign” amid allegations of sexual misconduct.

On Monday, women who have publicly accused Trump of sexual harassment and assault — some of whom were featured in a film titled “16 Women and Donald Trump” that looks at the allegations — spoke out at a press conference hosted by Brave New Films, the studio that made the film. Amid requests for a congressional probe into the allegations, the White House argued they “took place long before he was elected president.”

When asked whether Trump and the White House should be worried, Gillibrand urged the president to step down.

“Well President Trump should resign,” Gillibrand told CNN’s Christiane Amanpour on Monday. “These allegations are credible, they are numerous. I’ve heard these women’s testimony and many of them are heartbreaking … Whether he will ever hold himself accountable is something you really can’t hold your breath for and so Congress should have hearings. They should do their investigation. They should have appropriate investigations of his behavior and hold him accountable.”

If Trump does not “immediately resign,” Gillibrand told CNN, Congress “should have appropriate investigations of his behavior and hold him accountable.”

On Sunday, Nikki Haley, the U.S. ambassador to the United Nations, said Trump’s accusers “should be heard.” Gillibrand agreed and added that they “should be believed,” according to CNN. 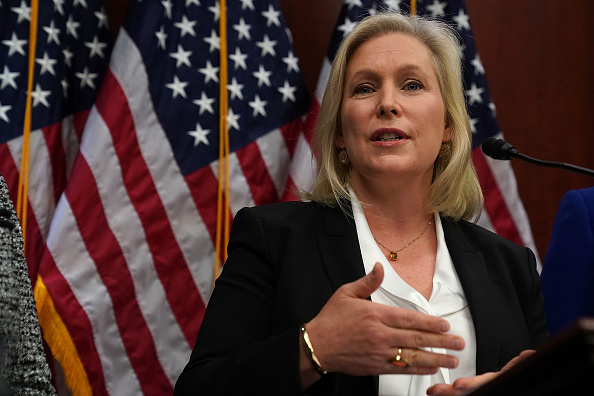