Republican Senator Lindsey Graham of South Carolina said something silly last week about amateur President Donald Trump. John Dickerson of CBS could have embarrassed Graham with it on Sunday on Face the Nation.

Instead, Dickerson elicited more serious comments from his influential conservative guest. Graham suggested Trump may soon start a war in North Korea. He also said Trump ought to watch what he says—or tweets—about a criminal investigation that is closing in on Trump’s White House.

“You tweet and comment regarding ongoing criminal investigations at your own peril,” Graham said. “I’d be careful if I were you, Mr. President. I’d watch this.”

“What concerns me about the American press is this endless, endless attempt to label the guy as some kind of kook, unfit to be president,” Graham said on CNN.

But last year, early in the presidential campaign, Graham said of Trump: “I’m not going to try to get into the mind of Donald Trump because I don’t think there’s a whole lot of space there. I think he’s a kook. I think he’s crazy. I think he’s unfit for office.”

Although Dickerson chose not to play back this doubletalk, Howard Kurtz did on Media Buzz on Fox News Channel.

Too bad no one asked Graham, “So, sir, what, exactly, has changed about the 71-year-old, junk-food-addicted, television-obsessed, red necktied, orange-faced, yellow-haired demagogue to make him less kooky, less crazy and more fit for office?”

As for the possibility of war in North Korea, Graham warned that American forces posted in South Korea should not bring spouses or children. In that he is powerful and well-informed as a member of the Senate Armed Services Committee, Graham’s worries matter.

“We’re getting close to a military conflict,” Graham said. “We’re running out of time.”

He said the United States under Trump might start a pre-emptive war if North Korea gains the ability to put a nuclear warhead on an intercontinental ballistic missile.

“That preemption is becoming more likely as their technology matures,” Graham said. “If there’s an underground nuclear test, then you need to get ready for a very serious response by the United States.”

Graham also serves on the appropriations, budget and judiciary committees. He is telegenic, slick and smooth, a polished video performer. He likes the camera and news networks like him, even when he makes a faux pas. His words matter more than some.

Sometimes, when sending messages to Trump, Graham speaks and looks directly into the camera as if in a one-on-one chat. Graham—and most others on most shows—was reacting Sunday to Trump’s Twitter tantrums of the weekend.

One of his tweets said, “I had to fire General Flynn because he lied to the Vice President and the FBI.”

Flynn—who served in the campaign, on the transition team and in the administration as national security advisor—pleaded guilty last week to lying to the FBI, a federal felony. He is expected to testify in the investigation of Trump and the Russians by special counsel Robert Mueller.

Although Trump lawyer John Dowd later claimed he wrote that Twitter message for Trump, either authorship suggests that the Trump gang knew Flynn lied to the FBI about his contacts with Russia and still kept him on the job as national security adviser.

Before and after Flynn’s firing, Trump clumsily tried to protect him from federal investigators by first cajoling and then by firing FBI director James Comey. Did Flynn just lie for the fun of it or was he hiding something?

“Was there any effort by the Trump campaign to coordinate with Russian intelligences services or any entity controlled by the Russians to receive benefit during the election?” Graham asked. “They have found the one guy that would know that.”

This was ambiguous. Was Graham trying to narrow the focus to Trump’s argument that there is no “collusion” and only “collusion” would be wrong although “collusion” is not a crime? Or was Graham suggesting that Flynn might reveal secrets leading to Trump’s impeachment?

It was hard to tell, but he kept repeating things.

“If there was coordination between the Trump campaign and the Russians, I can’t think of a person who would know more about that than Flynn,” Graham said.

He expanded a little when he returned to the topic.

“Collusion between a campaign and a foreign government is unacceptable,” Graham said. “There is no evidence of collusion. Nobody’s been charged with it. But you’ve found the one person who would know if it did exist. So, it won’t be long before we understand, one way or the other, what (sic) the Trump people colluded with Russia because I can’t imagine it happening and Flynn not knowing about it.”

Just in case anyone tuned in late, Graham hammered home the point one more time.

“Mike Flynn would know, if there was collusion, in my view, between the Trump camp and the Russians,” Graham said. “There’s no evidence of collusion yet. Nobody’s been charged with collusion.”

True, but four people from the Trump gang have been indicted for other things and two have entered guilty pleas and flipped to the feds.

Graham, who golfs with Trump, may soon prove pivotal in the coming developments involving the president, the party, and the Senate at large along with the safety of the nation and the world.

More than some of his right-wing colleagues, Graham is known to be collegial with Democrats and liberals and independent of the irrational tribalism that grips the Tea Party GOP.  Like other Republicans, he may eventually decide their party is better off with President Mike Pence than with President Donald Trump.

Should Flynn’s testimony get Trump impeached by the House of Representatives and tried in the Senate for removal, Graham could be one of the most influential people in that solemn chamber, a  voice and a face that may get plenty more TV time to repeat that key word, “Unfit.” 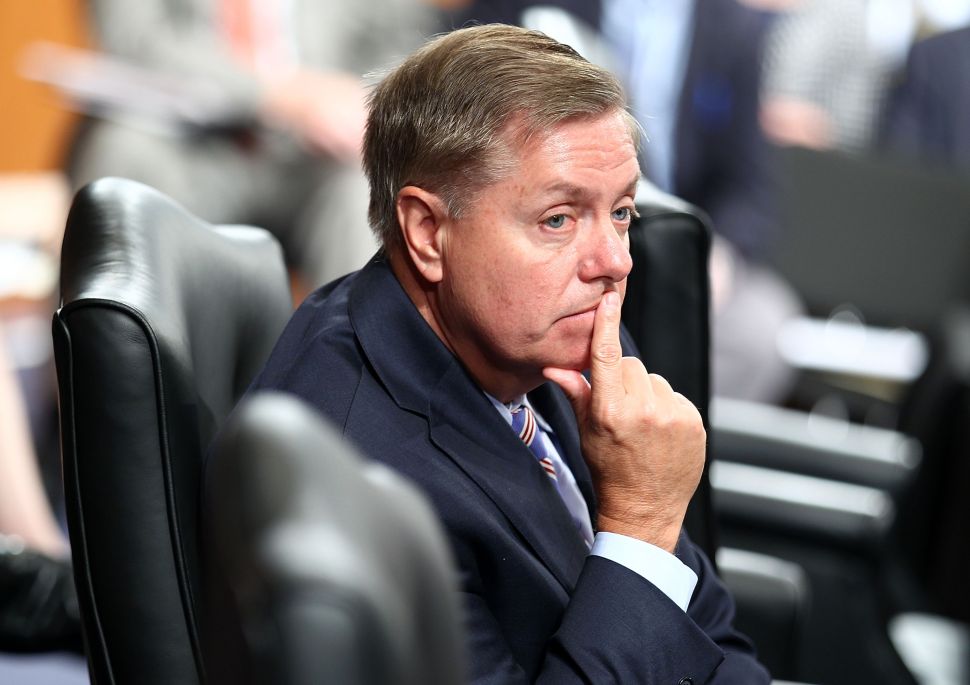