On Forbes‘ 2017 list of the world’s most powerful women, Margarita Simonyan ranks 52.

“A multitude of my relatives complain that it’s too bad the list is not the one they wanted to see me on [i.e. Most Wealthiest Women],” she jokes, although she is pleased she is ahead of Hillary Clinton by 13 positions.

Simonyan dines with Oliver Stone and other celebrities in posh Moscow restaurants, doesn’t object to smoking pot while in Amsterdam, and enjoys rockstar fame in Russia. She has been married twice and is only 37 years old.

Vladimir Putin once sent her flowers on her birthday.

Her first time in the U.S. was as a high school senior, and she was in the country for a year. She found Russia and the U.S. and their people very similar, she recalls, “There is just a small difference between the United States and Russia—Russia does not teach the whole world democracy.”

Simonyan’s inclusion on the list of the most powerful women in the world is deserved: For 12 years she has been the head of RT and Sputnik international Russian news networks. She has turned them into influential Kremlin bullhorns, earning both the envy and contempt of powerful news organizations in the West. Last year, RT bragged that 35 million people viewed the website daily.

“I will try [not to swear], but I do not guarantee it,” she replied to her press service’s multiple pleas to curtail her vocabulary.

Last month, due to their alleged interference in the U.S. election, the U.S. Justice Department forced the organizations she leads—RT America and Sputnik—to register as foreign agents and banned their reporters from working in Congress.

She does not mince words when talking about about how RT has been treated in the U.S. She said the U.S.-imposed four-day time frame for RT America to register as a foreign agent “cannibalistic.” Denying all accusations, she calls Congress “Politburo” and accused it of losing its grip on reality. She remarked, “The U.S. establishment will be looking at the bear and claim it is a camel. The absence of hoofs and a hump does not bother them.”

Congress is overrun by Russophobes, Simonyan preaches to her audience, stating, “The next step will be banning the use of the word ‘Russia.’ Instead of saying ‘Russia,’ they will be saying ‘this country,’ for example.”

She called the fourth on the list—“old grand dame” Hillary Clinton—“RT’s most devoted viewer.”

Simonyan shrugs off accusations that RT and Sputnik are Kremlin propaganda tools, tweeting, “While nobody watches them, journalists watch our broadcast in State Department.”

“You cannot imagine how often [foreign media] has complained about me,” she says. “We are called anti-Semites one day and Zionists the next. One day we hate this particular country, and the next we love the other too much, with which the first one run out of friendship. In reality, we love you all. Both energetically and tenderly.”

Responding to the pleas from her press service, she censored herself by saying “love” in the last sentence as opposed to the four-letter verb that starts with “F.”

“Too bad American media in Russia will probably feel all the tenderness of Russia’s countermeasures,” Simonyan wrote in October after RT America was informed by the U.S. Department of Justice that it must register as a foreign agent.

Last Tuesday, the Russian government declared Voice of America and Radio Free Europe/Radio Liberty “foreign agents,” and Margarita Simonyan was the driving force in Russia’s parliament behind this action. Both outlets were banned from working inside the Russian Parliament as well.

In November, Simonyan lost her self control over the treatment of her organization and concocted a bizarre revenge plot.

She called on to her fellow citizens who had obtained permanent U.S. residency status to abandon it immediately.

“With my girlfriend, we are drinking to the jolly event—her abandonment of her [U.S.] green card,” she began in a Facebook post that was later spread by the major Russia news media RIA Novosti. “In 2011,” Simonyan continued, “pregnant Lilia went to Bolotnaya [a square in Moscow] to take part in a massive anti-Putin demonstration. In 2013, she immigrated to the U.S. In 2017, she returned and now plans to vote for Putin.”

Simonyan then told her followers in detail how to abandon their U.S. green cards, and she uploaded scans of all necessary documents.

“Step 1: We go to the right site. Step 2: Look for the form for abandonment I-407. Download it. Step 3: Fill out two copies. Step 4: Receive 13-digit case number that we use to enter the site. Step 5: Make an appointment at the nearest office of the U.S. Immigration Service. One copy of the form you keep [for your records] and to frame it. Step 6: Receive congratulations and drink wine.”

According to Will Stevens, press secretary of the U.S. Embassy in Moscow, in addition to professional and family-based immigration, 330,000 Russian citizens took part in the green card lottery in 2016, a 24 percent increase from the previous year. (Former U.S. Ambassador to Moscow Michael McFaul tweeted sarcastically, “Wow. That’s a big number. Wonder how many Americans applied to move to Russia?”)

With such numbers of U.S.-directed immigration from Russia, it will be a long, uphill battle for Margarita Simonyan. But those who never thought about immigrating are ready to help.

“I have never had a green card,” one Russian commented on Simonyan’s plan, “so I will skip right to the wine part.” 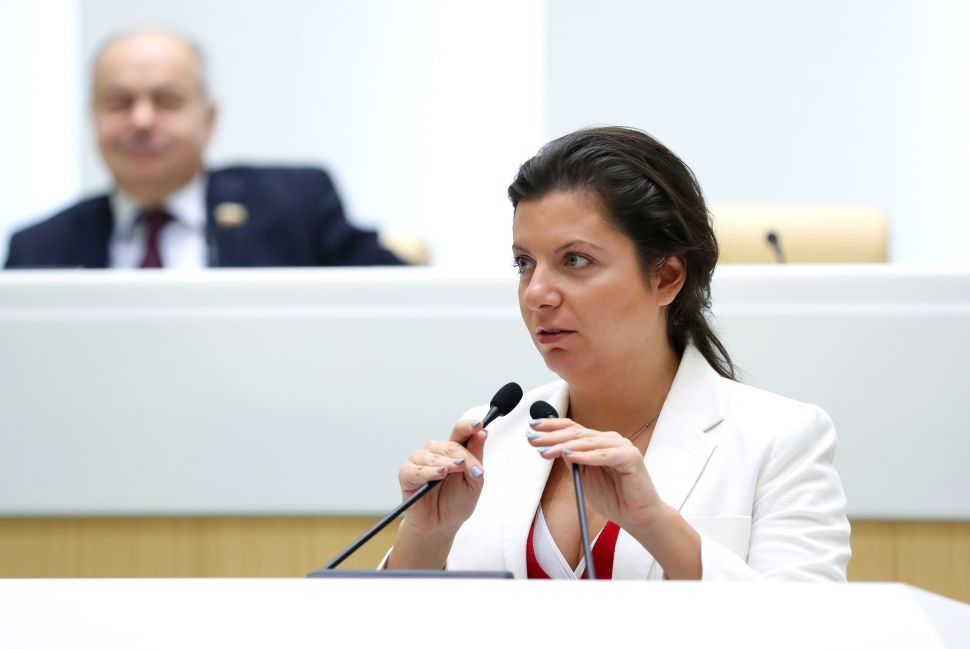