Even by the bombastic standards of Morning Joe, Thursday’s show was extraordinary. The bitter words flowed like lava from MSNBC shortly after 6 a.m., with hosts Mika Brzezinski and Joe Scarborough attacking the dangerous and irresponsible impulses of amateur President Donald Trump.

“A series of alarming tweets… sparked an international uproar,” Brzezinski said, “raising serious concerns about his fitness to serve.”

Scarborough encouraged Trump’s cabinet to consider using the 25th Amendment to replace Trump with Vice President Mike Pence by declaring Trump too impaired for the job following his social media smears of Muslims and his clumsy embarrassment of Native Americans in an Oval Office ceremony.

“What’s the cabinet waiting for?” Scarborough asked. “Mike Pence, guess what? Republicans want you to be president… You know why? Because you’re stable.”

The hosts reacted this way because Trump this week has:

So powerful was Morning Joe’s opening segment that Sean Hannity disputed it 13 hours later during his ever-lengthening monologue at the top of his Hannity show on Fox News Channel. He described Scarborough’s performance as “a complete mental, emotional breakdown.”

After showing a clip of Scarborough calling Trump unstable, Hannity returned his chunky face to the screen to re-assure You The American People that Trump is not unstable.

“I know for a fact that’s not true,” said Hannity, who chats often with the loud, large, 71-year-old, orange-faced, yellow-haired demagogue. Hannity accused Scarborough of “this obsessive, compulsive, non-stop hatred” of his hero, Mis-tah Trump.

As he spoke, the screen showed a picture of Scarborough with a smug smile on his face and a headline that said “Liberal Joe’s Meltdown.”

Hannity neglected to mention that Trump also posted a message alluding to a conspiracy hoax—long disproven—about the accidental death of a Scarborough employee 16 years ago when he was a Florida Congressman.

Trump—in his sleazy style of innuendo—implied that Scarborough might be a murderer.

“A false conspiracy theory to intimidate the press and cause a chilling effect on the First Amendment,” Brzezinski said as the camera bore in on her stern face. “Joe and I are not intimidated and (Trump’s) bizarre behavior contravenes both the Constitution and basic moral judgement.”

In pushing for a purge of the president, Scarborough specifically urged action from cabinet members   James (Mad Dog) Mattis, the Secretary of Defense, and Rex (T-Rex) Tillerson, the soon-to-be-extinct Secretary of State.

Scarborough’s rant aired hours before the White House sent out messages through the media that Trump wants to replace Tillerson with CIA Director Mike Pompeo. (With nothing to lose, wouldn’t it be fun to see T-Rex go public and try to lead the coup? They’d need only a majority.)

Hannity also objected to Scarborough reporting that he and Brzezinski were told during the 2016 campaign by “people close to him” that Trump had entered early-stage dementia.

“When are we supposed to say this, after the first nuclear missile goes?” asked Scarborough, who predicted at least a land war against North Korea over the issue of nuclear weapons. “Is that when it’s proper to bring this up in polite society?”

Trump has been taunting North Korean leader Kim Jong-un, calling him “short and fat” and “Little Rocket Man” and threatening “fire and fury” like the world has never seen. Scarborough called both nuclear-equipped leaders “unstable madmen” and Brzezinski quoted an editorial from the New York Daily News.

“The President of the United States is profoundly unstable,” she read from the newspaper. “He is mad. He is—by any honest layman’s definition—mentally unwell.” She said something would be done about him “if anybody in the Republican Party had a spine or even a brain or a moral compass.”

With their co-host, Willie Geist, and other guests, they carried on this theme for about a half-hour with Geist showing a video clip of Trump calling the North Korean leader “a sick puppy.” Geist said whatever Trump is, he projects onto others.

Brian Klaas of the London School of Economics visited by remote camera from England and called Trump’s tactics “a classic aspect of “divide-and-rule” techniques.

“Demonizing and scapegoating minorities,”Klaas said. “…Demonization of the press… Constant ethics violations… There’s a constant Orwellian nature to this… This is a threat to our democracy… Are we all bigots who just smear Muslims and say that they are hateful, anti-Christian animals?”

Back on the set, Susan Del Percio, a Republican operative, added, “This president doesn’t have the intellect or the emotional ability to handle the needs of this country.”

As to the possibility that American and North Korean planes or ships could accidentally start a war by one misreading the intentions of the other, Del Percio said, “If there is an incident, is this president emotionally and intellectually available to address the crisis? …No.’”

Geist returned with another video clip, this one of Press Secretary Sarah Sanders telling the news media not to be too concerned about how Trump mass-distributed hate messages originating from a British neo-fascist group that demonizes Muslims and murdered a member of Parliament.

“So deeply depressing,” Geist said. “What she’s saying is ‘Don’t believe the facts, believe what the president tells you.’” 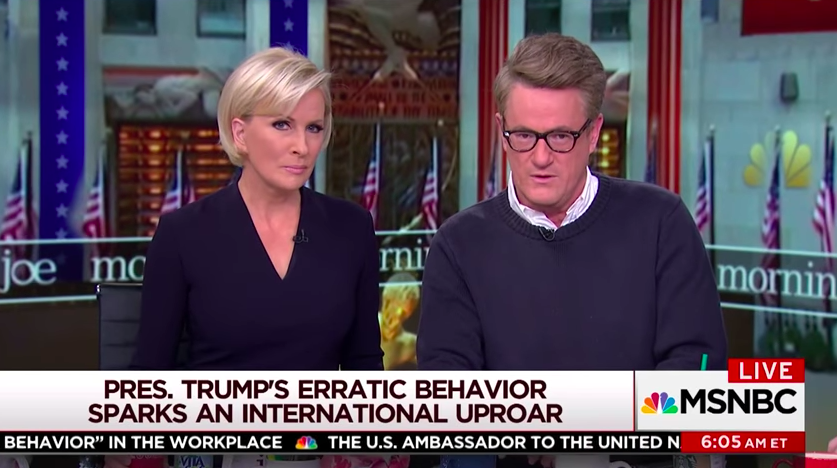