As Minister of Propaganda for the Radical Republicans, Sean Hannity of Fox News Channel fluffs up amateur President Donald Trump while huffing and puffing fire and smoke at Trump’s targets in a manner both cynical and sinister.

Because he is a confidant of the word-slurring, 71-year-old, orange-faced, yellow-haired demagogue, Hannity is both influential and dangerous as Trump grows more desperate. The progressive network MSNBC seems to notice this and fought back on Thursday.

In an Olympian display of baton-passing, its show hosts played Hannity highlights from hour to hour and answered them with stern commentary.

After each video clip, the hosts made the point that Hannity and the Republican Party are using unseemly personal attacks to discredit special counsel Robert Mueller, the FBI, the Justice Department and the investigation into the dirty deeds of the Trump gang.

On Hardball early in the 7 p.m. hour, Chris Matthews played a clip of Hannity talking with Gregg Jarrett, a law-talkin’ Fox guy who is also a famous airport celebrity.

HANNITY: “This entire witch hunt needs to be shut down and shut down immediately… Robert Mueller has assembled the most partisan special counsel in history. They are an utter disgrace.”

JARRETT: “The FBI has become America’s secret police. Secret surveillance. Wire-tapping, intimidation, lawlessness and threats. It’s like the old KGB comes for you in the dark of the night.”

From his studio, Matthews interviewed conservative columnist Bret Stephens of The New York Times who said some conservatives are forcing a fake narrative that Mueller is out of control and that Trump should fire him because “he’s getting close to the heart of a genuine scandal.”

Another guest, former FBI agent Frank Montoya, called the attacks on Mueller “the last refuge of a bunch of cowards” who are in “panic mode.”

In the 8 p.m. hour on All In, Chris Hayes showed a clip of Hannity calling the Mueller probe “the biggest corruption we have ever seen in terms of our justice system” and “a total political sham.” Hayes referred to Hannity’s show as “Trump TV.”

The next host—Rachel Maddow, in the 9 p.m. hour—got to this theme much later than the others and presented it slightly differently. As is her style, she connected dots.

First, a full-screen blowup of Trump’s tweet calling the FBI’s reputation “in Tatters.” Next, a screen showing a Wall Street Journal editorial headlined “Mueller’s Credibility Problem” and demanding he step down.

Then a clip of Hannity. But, instead of playing his voice, her producers turned the sound down as Hannity’s lips moved and Maddow spoke without mentioning Hannity’s name.

“It’s all over a certain corner of cable news as well,” Maddow said. “They’re saying Robert Mueller is a disgrace to the justice system.”

At this point, it was only fair to DVR over to Hannity and scroll back to the beginning to hear his Thursday sermon.

“Rampant political bias,” he fumed, raising his voice and pointing his finger at You, The American People. “It is now affecting your justice system like a cancer. It is threatening the very foundation of rule of law in America.”

To balance his bias, “opinion journalist” Hannity then brought on Kellyanne Conway, a Trump mouthpiece who fires off words the way an assault rifle spits out bullets from a shattered hotel window in Las Vegas.

Hannity asked her “Is this a fair investigation… Don’t we need a justice system that is fair and balanced?”

Conway then spoke uninterrupted for the next three minutes and 29 seconds.

Among her words were “above the law,” “Russia-Russia-Russia,” “It stinks to high heaven,” “The media have set a trap for themselves,” and “I want to say one more thing.”

Back on MSNBC in the 10 p.m. hour, Lawrence O’Donnell on The Last Word showed the same sound clips from Hannity before interviewing journalists David Frum and Daniel Dale.

Frum stressed Trump is running out of time before Mueller indicts people even higher than former national security advisor Mike Flynn, who pleaded guilty last Friday to a federal felony of lying to the FBI.

“This Mueller train is leading somewhere they really don’t want to be,” Dale said.

Finally, in The 11th Hour, host Brian Williams played video of Hannity barking, “Mueller’s credibility is in the gutter tonight… His conflicts of interest. His clear bias… The corruption. Mueller is, frankly, a disgrace to the American justice system.”

Williams followed this with a clip from Deadline: White House from the 4 p.m. hour. It showed several Hannity highlights before Nicole Wallace turned it over to Republican campaign manager Steve Schmidt.

“This isn’t criticism,” Schmidt said of the Hannity/Republican/Trump message. “This is a pre-meditated, deliberate, dishonest smear… What you’re seeing on Fox News is indistinct from the type of propaganda that you would be subjected to if you lived in Belarus or if you lived in Russia. It is dishonest. It is purposeful. It is misleading… This will get worse before it gets better.” 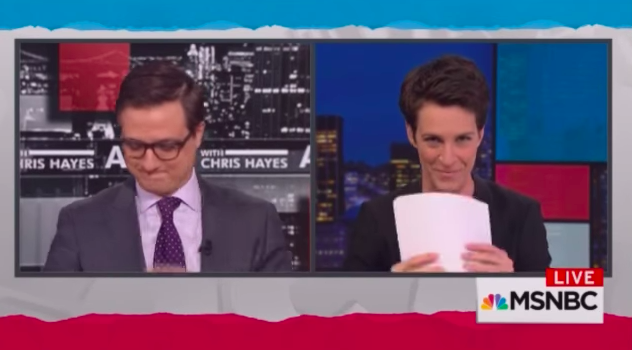