The candidates faced off in the NY1 debate, the only televised debate of the race, on Friday. NY1 Political Anchor Errol Louis moderated the debate, and NY1 Political Reporter Courtney Gross was a panelist.

On Thursday, Williams and Rodriguez introduced the bill. If passed, voters would weigh in via referendum. Williams, who is in his third and final term, has been drafting legislation for several years since testifying before the City Charter Revision Commission in 2010.

Last month, all eight candidates announced they are in favor of it. Most of them advocated for it to be determined by voters through a referendum and for it be done exclusively for Council members. But despite that overall agreement, when Louis—who recently wrote a scathing New York Daily News op-ed blasting the request—asked them about the subject, members seemed to have different opinions on the bill.

Van Bramer opposed the bill and stated he would vote against any legislative attempt to overturn term limits. He is for term limits and does not see a “groundswell of citizens seeking a referendum.”

In 2008, then-Mayor Michael Bloomberg increased the two-term limit for the mayor, the Council and all citywide offices, but the limit was ultimately restored. Mayor Bill de Blasio told WNYC’s Brian Lehrer on Friday morning he would veto the legislation. (He backed an extension when he was a speaker candidate in 2005 but eventually helped lead the opposition to Bloomberg.)

Williams outlined it as a “leadership moment.”

“If we all identify that there is a problem [with] the way term limits are applied, we have a duty to provide leadership,” the councilman said.

Richards dismissed the bill as a “very premature question” because the voters “have spoken.” While he believes that the proper amount of time for members to get their jobs done is three terms, they have “been down this road before.”

“I think that this is not progressive, this is regressive and I think internally, speaking to Council members, we are seeking votes from, no one has raised this issue and I have not heard from any grassroots organizations in my district that they’re seeking [for] us to have another term,” he complained.

And he accused Williams and Rodriguez of not engaging colleagues “outside of this circle of conversation.”

“I would like to go to my constituents to talk to them before any conversation about term limits is had and I was not afforded that opportunity to do that,” Richards continued. “And I would also want to add that this has moved forward too fast without us being able to do that.”

Torres has no inclination to seek an extension.

“I support term limits because it creates space for a new generation of elected officials to emerge in public life,” the lawmaker said.

Williams defended his plan, calling it the “beginning of a process, not an end” and saying he finds it “interesting” that the same colleagues speaking out against the bill had no problem voting for a pay raise “when most people didn’t want to support it.”

Johnson set aside the term limit issue as “not in the top 50 issues” that the public cares about. Levine anticipated 70 percent of the body leaving the Council in the same year would “not good for the City Council.”

But he agreed with Johnson that they should focus on more pressing issues, such as public housing, health care and mass transit.

“That has got to really be on the top of our agendas,” he said.

Still, Williams and Rodriguez seemed to get some encouragement from Cornegy.

“I find it a little curious that, as it relates to protecting the interests of our membership body in terms of vesting into the city, we’re squeamish about doing that,” the councilman responded.

Every four years after an election, the 51 members vote to elect a new leader in January via an internal process usually dominated by the county Democratic organizations of Queens, the Bronx and Brooklyn. Candidates must get 26 votes to win.

When asked whether he is endorsing any of the candidates, de Blasio acknowledged his role in helping Mark-Viverito win the speaker’s race in 2014 but insisted he plans “to be involved in the final analysis here.”

“I want someone who’s going to be a good partner… I need to know who will do that best and who will share values and vision the most,” the mayor said.

All eight candidates have met with the mayor. This time around, de Blasio is expected to have less clout, and members want a speaker who can stand up to him.

Levine, who is viewed as the mayor’s choice, denied he is de Blasio’s preference for speaker. He claimed the process is “driven by a lot of rumors” and is lobbying all stakeholders, including congressional lawmakers and unions.

Donovan, who is also rumored to be a favorite of de Blasio’s, maintained he is seeking everyone’s endorsement. He told Louis he will not be an “obstructionist” to the mayor’s agenda but if his agenda hurts his district, he will speak up. Van Bramer, for his part, would be “thrilled” to have de Blasio’s endorsement and hopes to demonstrate “respectful independence.”Rodriguez expects the speaker to be selected through a compromise as opposed to the way Mark-Viverito was elected.

Torres touted his record as chairman of the Committee on Public Housing, which shows how he can oppose the mayor but have a working relationship.

He prefers to negotiate to get the Right to Know Act, a package of police reforms bills opposed by de Blasio, of which he is a sponsor, “if the administration is negotiating in good faith.” Mark-Viverito made a deal with former Police Commissioner Bill Bratton that would have the changes made internally to the NYPD’s Patrol Guide.

Cornegy, who chairs the Committee on Small Businesses, pointed to his opposition to the horse carriage bill as an example of him standing up to de Blasio. Williams, who claims he has voted against de Blasio more than any of the other candidates, insisted balance is key.

“It’s about being independent but also producing results, and I think I have the best combination of that,” he said. 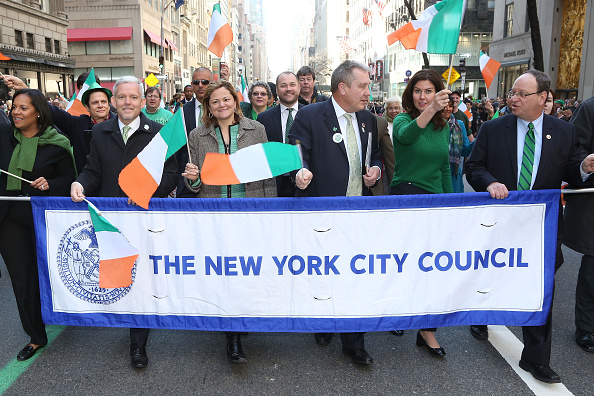