New York City has hit the lowest number of major crimes since the 1950s and is on track to be the safest it has ever been in more than a half century, the NYPD told reporters on Monday.

“We’re seeing the lowest number of index crimes here since the ’50s and with informed, engaged, empowered communities, we’re going to keep pushing those numbers down even further,” Police Commissioner James O’Neill said. “And I get asked all the time, especially by you guys, how far can we push crime down and I think working with everybody in this city and working with all our partners we can keep pushing those numbers down.”

He argued “nothing happens by accident,” crediting police officers for their daily work and neighborhood residents taking more active roles to help the NYPD.

“These are the good people who know exactly who the bad people are and increasingly, it’s the good people who are strengthening their relationship with the NCOs, the neighborhood coordination officers, the steady sector cops and everyone else who works in a busy command like this,” he continued.

And he maintained only a few thousand people are responsible for most of the violence occurring in the city. He said the NYPD has been taking them off the streets with “laser light precision.”

The Police Department, he explained, works closely with the district attorneys and U.S. Attorneys to pre-indict individuals for a host of violent crimes and is seeing “more and more meaningful prison sentences at the end of it all.”

“It’s that method of precision policing—that’s the vehicle within our neighborhood policing philosophy that’s leading to lower and lower crime seats, even past already historic lows.” O’Neill added.

The city hit a number of records, Shea reported. The city has seen nine straight months of reduced index crime, knocking down index crimes in New York City for 15 of the last 16 months. The city has also had 21 straight months of reduced robberies, seen shootings down for 12 of the last 13 months and spent 52 days without a single shooting this year. And the city has had a decrease in the number of arrests for 22 months in a row.

“When you start to talk about what you’ve heard the precision policing, the neighborhood policing and the strategies coming together, it’s not just about the crime victims,” the police official said. “It’s about how we are getting where we are going—arrests down 22 straight months.”

For the month of November, the city has had 20 recorded murders, down from 25 during the same time period last year—a 20 percent reduction, according to Shea. Out of the 20 murders, 13 were by gunfire, two were by arson, one was by a vehicle and four “were by cutting instruments.”

There were 111 rapes reported in November, compared to 96 in November 2016—an increase of 15 crimes. The increase in the number of reported rapes coincides with recent news coverage of sexual assault allegations against high-profile individuals, including celebrities and politicians. Shea admitted it is “very difficult to say the role that plays in it but that is two months in a row of double-digit increases.”

Robberies are down 9 percent, and felonious assaults—assaulting an individual with weapons such as a gun or knife that cause serious injury or death—dropped by 13 percent. Burglaries decreased by 7 percent; property grand larcenies, by 5 percent; and stolen vehicles, by 12 percent.

Mayor Bill de Blasio said neighborhood policing, which pairs police officers with residents, was “just the beginning of an idea” but is now a “living, breathing thing” that has had a substantial impact and will “get better all the time.”

De Blasio contended having more police officers on patrol—in 2015, the mayor and the City Council reached a deal to hire 1,300 new police officers—new training, new equipment and the neighborhood policing strategy have helped lower crime in the city

“Here’s the bottom line: if these trends continue through this month, the people of this city will have had the safest year on record in over half a century,” he said. “That’s the trajectory we’re on right now. I could not be more proud and more appreciate to all the leaders gathered around me and especially the men and women of the NYPD who have achieved this.”

Still, the mayor insisted the city’s work is not done and that they will continue to work on fighting crime in the city.

“We, of course, I’ve said it before, we’ll never rest on our laurels,” de Blasio added. “This department doesn’t know how to rest on its laurels. It only wants to keep making more progress. We’re the safest big city in America. We’re going to go farther.” 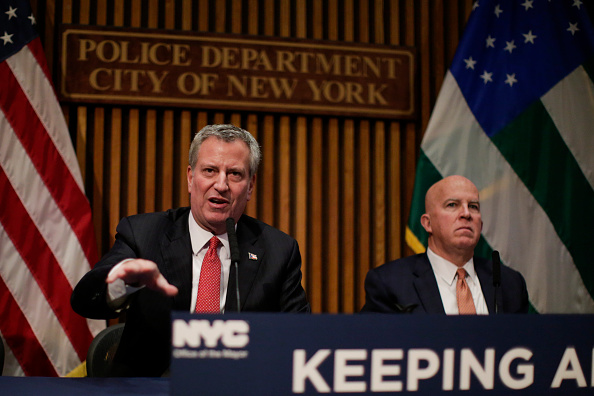