Amid the Internal Revenue Service’s warning that some taxpayers who prepaid their property taxes may still face a cap on deductions, Gov. Andrew Cuomo and Mayor Bill de Blasio have defended the move as the best way to address President Donald Trump’s last-minute tax bill and reassured taxpayers.

Last week, Cuomo issued an executive order that authorizes local governments to immediately issue tax warrants for the collection of 2018 property tax payments and enables property owners to pay at least part of their bill before the end of the year.

But in an advisory published on its website on Wednesday, the IRS warned that prepayments of 2018 state and local taxes prior to Jan. 1 may be tax deductible only if they are assessed and paid for in 2017.

When asked about the confusion the tax bill has elicited among New Yorkers and how his executive order will help them in the wake of the IRS advisory, Cuomo blasted the bill as “confusing” and a “scramble.” The legislation, he insisted, was passed in the “dead of night” and was not vetted with the public.

“They called it a tax cut,” he told MSNBC’s Katy Tur on Thursday. “It’s not a tax cut for New Yorkers, Californians, people who live in blue states. One of the ways they did that was by eliminating the deductibility of state and local taxes, which in New York, California, the blue states, is significant.”

He noted most of the local governments have been cooperative with his executive order and described it as a “scramble” because “we only had about 10 days to prepay.”

“Local governments need to do their final budget so they have an assessment, so they can issue a warrant,” Cuomo continued. “What you are referring to is, the IRS said you can only prepay if you know what the amount is. So the local governments had to come up with the actual amount of what next year’s taxes would be and then New Yorkers had to go make those payments before December 31.”

Under New York law, some areas were able to prepay their taxes while others were not but there was no reason to prepay because it was always deductible, according to Cuomo. Now that the bill says the taxes are no longer deductible, “you have to prepay,” he explained.

“We’re doing the legal research now to see if there is a legal challenge,” he added. “I think it may very well violate the due process and equal protection laws. It is the most egregious political act I have seen. Not since the civil war have you seen the states this divided. And it was done quickly. It was done without any public review. And now you’re seeing the backlash.”

He added it does not make sense from a national point of view to “send a dagger to the heart” of New York and California, two of the biggest states and “biggest economic engines.”

Mayor Bill de Blasio said he agrees “with the state’s and the city’s interpretation.” He maintained he is not worried about misleading people given the IRS’ interpretation.

“We believe that, based on the work we’ve done with the state of New York, the state’s specific directives, that we are fully within the law in giving people this opportunity to pre-pay,” de Blasio said. “I understand not everyone will be able to take advantage of it. I understand there’s only a few days left. But it is something that will lighten the burden and we should take advantage of it and from our understanding, it is appropriate and effective.”

He added, “I don’t see any harm and if people are able to do it, we want to make sure that they don’t have that additional tax burden.”

The mayor noted that 600,000 New York City tax filers will see a tax hike as a result of the legislation, with the average predicted to be roughly $5,000 per household. And the majority of the 600,000 taxpayers who will be adversely impacted have an average income of less than $75,000.

“We understand this is gonna make for a tough situation for many people already struggling to make ends meet,” de Blasio continued. “We wanna lighten that burden in any way we can how unfair this legislation was, no matter how mean-spirited.” 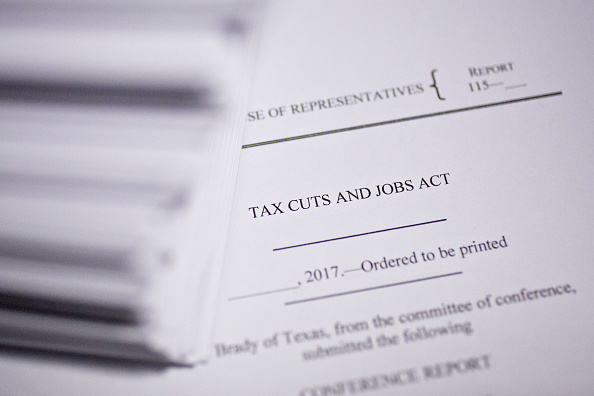