Every four years after an election, the 51 members vote for a new speaker in January through an internal process dominated by the county Democratic organizations — Queens, the Bronx and Brooklyn. Candidates have to receive 26 votes in order to win.

A group of seven labor unions recently announced they are backing three candidates for speaker: Levine, Richards and Torres. Those unions are 1199 SEIU, 32BJ SEIU, Retail Wholesale and Department Store Union, District Council 37, the New York State Nurses Association and the local chapters of the United Auto Workers and Communications Workers of America. It was said to be an effort to derail Johnson, who is backed by the Hotel Trades Council.

Sherrill noted Mark-Viverito’s career was largely in the labor movement. As parties weaken, he argued, other institutions like the labor movement, the religious right and “independent spending billionaires” step in and “fill the vacuum and get the power.”

“This is one of the things that often makes government less cohesive, is that people in office owe their nomination and election to political parties less than they used to and so they are less likely to hang together,” he continued. “You see that right now in the Republican Party in Congress in the House with the House Freedom Caucus. I think you see some of that in the New York State Legislature, too, and in a quieter fashion in the City Council.”

In a statement provided to Observer, the unions contended working people need “bold leaders who can stand up against the forces of inequality and division.”

“As leaders of unions representing over half a million working New Yorkers, we held a conversation with the Speaker candidates so they could hear our members’ concerns and share their own plans for the future of working people in our city,” they said. “We are united in supporting the candidates that we think are the best choices for moving our city forward: Donovan Richards, Mark Levine and Ritchie Torres.”

Stuart Appelbaum, president of RWDSU and executive vice president of the United Food and Commercial Workers, told Observer the unions believed the three candidates have provided a “positive vision” for supporting the city’s working people.

“Many of the candidates have similar views — and there are many good candidates running — but we were impressed both with their vision and commitment to the needs of working people and their style for advancing these goals,” Appelbaum maintained.

He insisted he did not want to criticize the other candidates. But he lamented the fact that there are no women running for speaker. And he added that while the leadership of the city should reflect its diversity, they would not “exclude anybody who’s qualified from consideration.”

“I think we wanted to provide our input as to what it is we’re looking for in a speaker on behalf of working people,” he continued. “The goal is to have some impact on the decision even though we are not the ones who ultimately determine who the speaker is.”

The unions and other stakeholders, Appelbaum said, have been discussing the race for about a year.

Neither HTC nor the six other unions were available for or responded to requests for comment, though a few referred Observer to the joint statement.

Crowley dismissed a report saying he was angered by the move.

“They have every right to express themselves in any way they want to and I appreciate that. There’s no anger at all,” he maintained. “I think that they’re part of the consensus building process here that I think that I’m involved as well as the mayor is involved [in] as other members of Congress and other members of elected office, mothers and fathers of the city who are involved in this process. But ultimately, it’s the 51 members in the City Council who will make this decision.”

When asked whether the endorsement is representative of what the city’s unions are feeling, he said “for some of them” but noted they are not looking to express their position “for any other union but their own.”

“So I’ve heard other things from other unions so that in itself says they don’t,” he continued.

He insisted he has just been listening to unions and other stakeholders to hear their rationale. He dismissed a report indicating he got commitments from 32 members, though he said all of the candidates “have shown certain strengths.”

Van Bramer told Observer he has spoken with just about all of the unions, including those with a preference. Many individuals in labor, he claimed, “think highly of my work and my commitment to their members.”

“I don’t believe that the statement that they put out is in any way a negative reflection on the work of each of the members…I don’t know how all of these things are received but I can only speak to my relationship with those unions and I believe they’re as strong as they ever have been and that will continue to be the case,” the councilman said.

When asked if unions are starting to have a bigger influence, he said he did not “have anything to say about that” but noted there are multiple stakeholders in the process.

“I think that they have a role to play but I would caution to add that the members ultimately vote and I think that the county leaders and others still have a very big role in this and I don’t think that that has changed here,” Van Bramer continued.

Levine said he is honored by the “vote of confidence” from the unions.

“As our city faces an affordability crisis, these unions play a vital role in making sure that hundreds of thousands of hardworking members can continue to call New York home by fighting for decent wages and safe work environments,” he said in a statement.

Cornegy pointed to his endorsements from the Transport Workers Union and Amalgamated Transit Union Local 1056, which “represent tens of thousands of hardworking New Yorkers.”

“The voice of labor is important in the process, just like the voices from communities of color and other vibrant parts of our city,” he said in a statement.

Dick Riley, a UFT spokesman, would not comment on who the union is supporting.

“The UFT has been in discussions with Council members about all the potential candidates for Speaker,” Riley said in an emailed statement.

Correction (Dec. 13): A previous version of this story stated that Teamsters Local 237 endorsed Brooklyn Councilman Robert Cornegy, which Cornegy said in a statement provided by his office. The union told Observer its president did not publicly back any candidate, and a representative for Cornegy confirmed it was an error on their part. 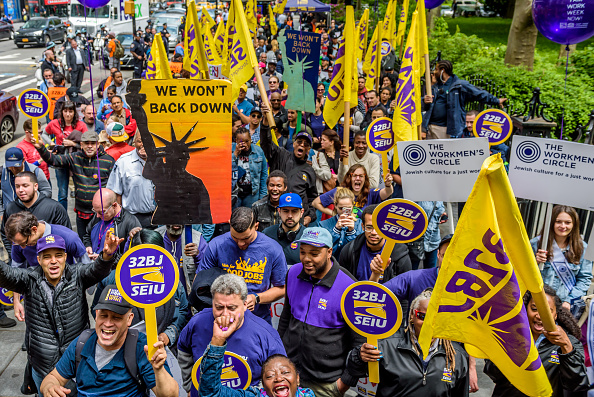