The City Council has reached a compromise with the NYPD on the Right to Know Act, a package of police reform bills, following tense negotiations that saw fierce opposition from the NYPD, Mayor Bill de Blasio and City Council Speaker Melissa Mark-Viverito.

One bill, sponsored by Bronx Councilman Ritchie Torres, requires cops to identify themselves upon making a stop. This bill was revised to have the identification requirement only cover stops pertaining to suspicion of criminal activity. The other bill, sponsored by Brooklyn Councilman Antonio Reynoso, requires cops to request permission before searching an individual. The majority of Council members back the legislative package.

Mark-Viverito’s office confirmed the bills were aged on Monday night and said the Council has the option to bring the bills to a vote at the monthly stated meeting on Dec. 19. Mayor Bill de Blasio told reporters he will sign the bills if they are passed by the Council.

“The goal here is to cover investigatory interaction when there’s suspicion of criminal activity…it’s to cover the interaction that poses the highest risk,” Torres told Observer.

When asked whether the bills will be voted on next week, he maintained he has not made a final decision because he has to have final conversations with the mayor and the speaker. But he said that if the Council votes on his bill, “that is the version that we’re going to be voting on.”

“The legislation has the support of the mayor and the NYPD and so we have a substantive compromise that’s guaranteed to be implemented wholeheartedly and immediately and keep in mind that there’s nothing in the legislation that forces the possibility of more progress,” the councilman continued.

Reynoso did not immediately respond to a request for comment.

In July 2016, Mark-Viverito announced that the bills would not go before the Council and instead be handled internally by the NYPD, which earned the ire of some Council members and police reform advocates.

De Blasio, for his part, had vowed to veto the bills, and then-Police Commissioner Bill Bratton described the package as “unprecedented intrusions” into the Police Department. In August 2016, Police Commissioner James O’Neill said he would honor the agreement between Bratton and Mark-Viverito.

“This legislation reflects nearly four years of thoughtful, serious negotiations between Council Members Reynoso and Torres, the NYPD and stakeholders and strikes a fair compromise between enhancing community relations and making sure NYPD officers are able to effectively do their jobs and keep New York City safe,” Mark-Viverito said in a statement.

“I thank the bill sponsors, the NYPD and my colleagues for their feedback and patience as we discuss how to best bring more transparency to the Police Department while continuing to support the honorable men and women of the NYPD who serve our City each and every day,” she continued.

De Blasio told reporters on Tuesday there have been “good, collegial negotiations” involving his administration and the NYPD.

“I think these bills are fair,” the mayor said. “I think it’s also very good that the NYPD, starting last year continuing through this year, implemented its own approach on these issues and changed the reality on the ground in an effective way but I’m also comfortable this legislation is consistent with the approach the NYPD has taken and is a good piece of reform legislation.”

He described the administrative approach as part of the overall police reforms the city has put in place, including reduced use of stop and frisk policing, neighborhood policing and the retraining of the police force on de-escalation tactics.

“From the beginning, I wanted to see if we were to go down a legislative road and again I state very clearly I believed the best approach initially certainly was to let the NYPD do this administratively,” de Blasio added. “They did, they did it very effectively. And I’ve said to a lot of people who care about the issue, if you’ve got specific instances where you feel the rules weren’t followed on the ground by officers, please come to me and no one’s ever come to me.”

The NYPD did not immediately respond to a request for comment.

Monifa Bandele, a spokeswoman for Communities United for Police Reform, said Reynoso has shown “real leadership” by ensuring his half of the Right to Know Act will be moving forward.

“His persistent advocacy to maintain an effective version of Intro 541 and related agreements is a testament to his commitment to advancing real change that is backed by and for communities,” Bandele said in a statement.

But the coalition blasted Torres’ bill because it does not include the officer identification requirements for all non-emergency investigatory encounters and traffic stops and eliminates the requirement officers explain non-emergency encounters. She also noted Torres backtracked on his public pledge to the Right to Know Act coalition he would not pass a version of the bill it does not support.

The coalition called on members to oppose the “loophole-dominated bill” and even wait until the next legislative session if necessary “when it can have a lead sponsor who will effectively advocate for it.”

“If this moves forward, it is a failure of leadership and a dishonorably crass political move that would reflect poorly on Council Member Torres and anyone who stands by it, providing an empty rhetorical achievement that leaves the civil rights of community members unprotected,” Bandele continued.

Torres accused the advocates of being “too blinded by their hatred for the NYPD to see progress” and noted the city has never set standards of accountability and transparency for day-to-day investigative interactions between police and civilians.

“I’m baffled by the opposition from some of the advocates…I’m a legislator,” he said. “In politics, there’s give and take, there’s compromise, and I cannot reason with people who refuse to be reasoned with.”

In a statement, Patrick Lynch, president of the Patrolmen’s Benevolent Association, which has been staunchly opposed to the bill, pointed to the attempted terrorist attack at the Port Authority Bus Terminal yesterday, noting that it is thanks to the “continuous, proactive efforts” of police officers “that even greater tragedies have been averted.”

“Unfortunately, even as we face this dangerous reality for our city, there remains — especially from some members of our City Council — a continuous piling on of new burdens and second-guessing for our police officers,” Lynch said. 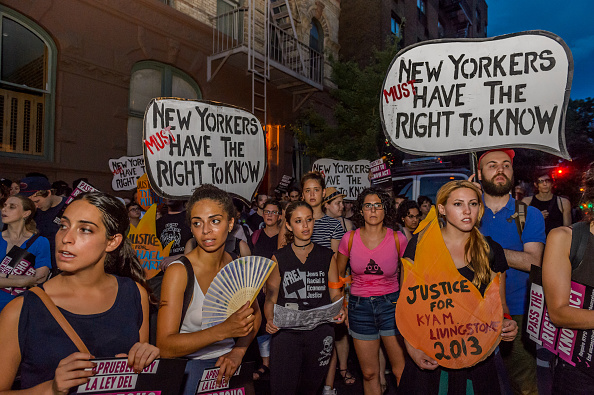