The big, white, American bald eagle on the logo of One America News looks a little like the screeching bird that used to swoop down to open The Colbert Report on Comedy Central.

But Stephen Colbert did a satiric sendup of right-wing cable television news, particularly of Bill O’Reilly and The O’Reilly Factor on Fox News Channel. So when you first watch OAN, you wonder: Are these guys for real or just a goofy spoof of Fox you might see on Saturday Night Live?

The OAN persona comes into focus when you watch The Daily Ledger with Graham Ledger, the anchor of weeknight prime time in the 8 p.m. hour.

His set, graphics and pace look and feel a lot like those of O’Reilly, who used to dominate cable news in the same weekday slot until he got fired from Fox last spring in a sex scandal.

Ledger doesn’t look much like O’Reilly or sound like him, but his delivery, attitude and opinions are a spectacular riff on (or ripoff of) the exiled Papa Bear. Ledger has O’Reilly’s cadence, his timing and some of his body-language tics to go with haughty, O’Reilly-like condescension and rude, knee-jerk opinions.

From Wednesday’s show, this was Ledger’s take on immigration.

“You want in this country?” Ledger said. “Fine. What are you gonna do for me?”

He spoke of his contempt for “these climate change propagandists (who) are no more than a bunch of lousy liars” who drink “the phony, climate change Kool Aid.” He faulted the progressive state of California for many things, including “catering” to homeless people.

“A large percentage of, quote, homeless are there by choice,” Ledger said. As for undocumented immigrants, they get “free housing, free medical, free food,” Ledger told his audience. “Whatever you want.”

Even the greedy Republican tax cut of last week was not enough for Ledger, who railed against the “Marxist-Socialist doctrine of a heavy progressive tax system.”

And he ranted against the mainstream news media as “the PR arm of the Democrat [sic] Party and mouthpieces for the fascist left,” and its “relentless, biased assault on the 45th President.”

LEDGER: “The President of the United States, Donald Trump, watches this network and has said so in public, correct?”

HERRING: “Ah, yes. He’s given us some ‘Attaboys!’ every now and then.”

Certainly OAN has earned them after starting up in 2013 as a quasi-objective headline service before going all-in for Trump in the run-up to the 2016 election. The Washington Post recently interviewed Cassie Leuffen, who anchored in those early years of OAN.

“We started out with the premise of news straight down the middle,” Leuffen told the Post. “But the bias does reveal itself in the story selection.” Herring, she said, “saw the popularity of Trump before almost anybody, and Trump became our bread and butter.”

As with most cable news, the bias—when not overt—is shown not only by what is covered but also by what is left out. The Post piece summarized the OAN point of view after interviews with more than a dozen current or former OAN workers and reading of internal network emails.

“Herring . . . has directed his channel to push Trump’s candidacy, scuttle stories about police shootings, encourage antiabortion stories, minimize coverage of Russian aggression and steer away from the new president’s troubles,” the Post wrote.

Herring said in Wednesday’s interview with Ledger that he made his money in electronics. He touted a gizmo called a KlowdTV Solution, a small box that attaches to the TV and pulls in OAN even if the cable system doesn’t carry it.

“Almost like a miracle,” Herring said. Ledger said about one-third of the nation gets OAN.

Those who do get OAN receive a rapidly-paced news feed of short stories that recycle every half-hour—usually with new items added and old ones dropped, much like the rotation on an all-news radio station. For most of the day, there are no panels or pundits, no Punch and Judy arguments.

OAN includes a lot of foreign news, more than the Big Three cable news networks. Often, these stories are narrated by British voices. Sometimes, pre-recorded pieces from other sources are sized wrong for the screen, with edges of the picture out of the frame.

The news anchors work live and are young and get tongue-tied from time to time. There are hardly any commercials and those pauses between segments are filled with patriotic history lessons, like about how Andrew Jackson beat the Brits in the Battle of New Orleans in the War of 1812.

Overall, OAN production has a jittery feel—not exactly amateurish but not quite polished, either. Earlier this week, when bumping to a break, a producer played a long segment of “Money for Nothing” by Dire Straits.

“We have a young crew here,” Herring told Ledger, “so sometimes we make mistakes.”

One of the biggest recently was the fault of Herring, who ordered his staff to proclaim Republican hero and accused child molester Roy Moore the winner of the Dec. 12 special election in Alabama for the U.S. Senate seat vacated by attorney general Jefferson Beauregard Sessions III.

OAN did this before the polls closed. When they counted the votes, it was clear to all but Moore that the winner was the Democrat, Doug Jones. A recent review in Salon called that race a tipping point for OAN, according to Laura Keiter of Media Matters.

“For at least a year now, the programming on OAN . . . has been a bizarre combination of far-right propaganda and seemingly innocuous local and international stories that OAN rips off from other outlets,” she said.

Herring and Ledger spent much of their conversation telling viewers how hard it is to get carried by cable and satellite providers. Herring said OAN is “begging to put our channel on” but cable companies are hard to budge.

“We’ve got the price down now to where it’s almost nothing,” he said.

Critics might say you get what you pay for. But those who miss O’Reilly’s act (or Colbert’s, for that matter) might enjoy this imitator, Ledger, who talks gruff, rough and tough in the sort of hard-guy, bully-boy tone liked and used by Trump.

In a piece about the United Nations and how American allies voted against the U.S. on the Jerusalem embassy issue, Ledger played a clip of the orange-faced, yellow-haired Trump snarling “We don’t care” about the vote.

Ledger followed it with Trumpian bombast of his own that might have brought tears to O’Reilly’s eyes.

“If you mess with the bull, you’re going to get the horns,” Ledger said. “The United States is no longer leading from behind.  We are out front again. So get out of the way . . .  There’s a new sheriff in town.” 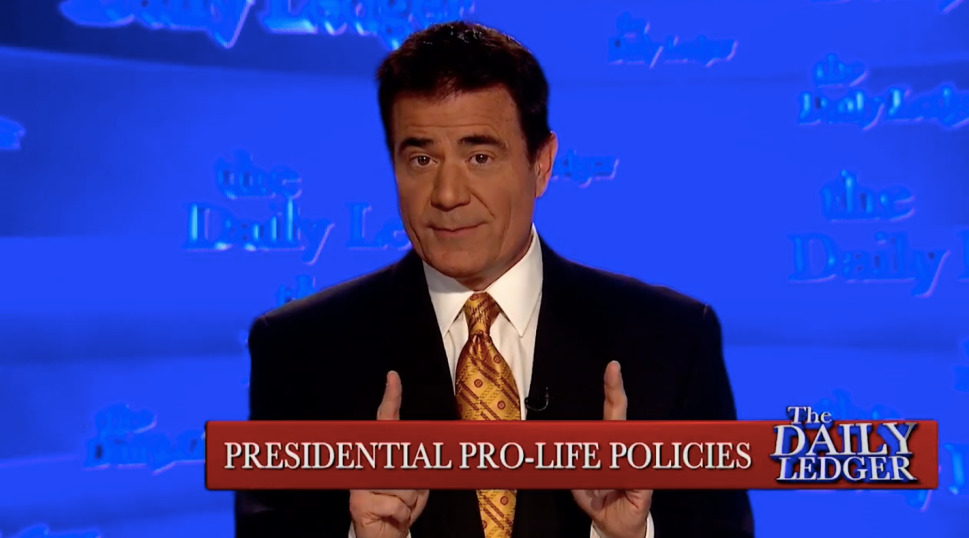