Fans, while excited, have been a bit confused by Warner Bros. planned Ocean’s Eight film featuring a main cast of all women. Is it a reboot to the popular 2001 crime comedy Ocean’s Eleven that starred George Clooney, Brad Pitt, Matt Damon and other A-listers that spawned a trilogy? Is it a sequel? No one quite knew what was going on. Fortunately, star Sandra Bullock is here to clear a few things up.

In a new interview with Entertainment Weekly, Bullock explains that Ocean’s Eight is a companion movie to the Clooney-led series that takes place in the same universe.

“We’re not a reboot,” she told the outlet. “We’re just a this is what’s happening in 2017. It’s not even a passing of the torch. It’s a parallel story of another family member that was raised in the same family Danny Ocean was and what happens when Debbie steps out of jail with all of these amazing, powerful women.”

So it’s not a remake or a direct sequel, it’s more of a spiritual successor that has a direct link to the well-liked Ocean’s trilogy. That’s a clever way to approach the material from a familiar angle that still comes across as fresh. It both distances the project from the other and sports an inviting hook. It will also hopefully keep skeptics from comparing the two films side-by-side.

This approach also opens the door for a return of familiar faces and a quick stroll through Oceans Eight‘s IMDb pages reveals that Damon is set to reprise his role as Linus Caldwell, likely in a cameo capacity. He’ll join a star-studded new cast of thieves that includes Bullock, Cate Blanchett, Anne Hathaway, Sarah Paulson, Mindy Kaling, Rihanna and Olivia Munn, who didn’t quite enjoy her time on the film. But all in all, Debbie Ocean (Bullock) sounds like an interesting new protagonist.

“Yes, I am Danny Ocean’s sister. I’ve been incarcerated for about five years and you find out why during the course of the film. I mean, that’s sort of a tiny subplot. But that’s, you know, but I’m definitely his sister and we definitely come from the same family and we’re both very good at what we do in our own special way. So you can only imagine that once I get out, that’s when the heist ensues.”

The lack of rehabilitation from the Ocean family aside, we’re pretty excited for this. Ocean’s Eight features a ton of other celebrity cameos, including Helena Bonham Carter, Katie Holmes, James Corden and more. Plus, it sounds like a cool adjacent addition to the original trilogy.

Ocean’s Eight is written and directed by The Hunger Games’ Gary Ross and it will hit theaters on June 8, 2018. 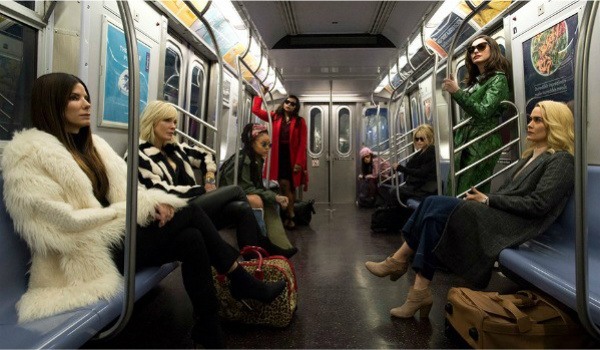