During his presidential campaign, Donald Trump often quoted lyrics from a song called “The Snake.” It is about a woman who befriends a sickly snake that recovers and bites her with poisonous venom.

As she dies, the snake explains, “You knew damn well I was a snake before you took me in!”

Trump would roar the last words to his cheering mob with a big grin on his smug mug.

When Trump slithered into the White House in January to “drain the swamp,” he brought with him a reptile named Omarosa Manigault Newman who used to star as a villain on The Apprentice.

Now that Trump has allowed his Chief of Staff John Kelly to fire her, Omarosa—she’s known primarily by her first name—may be plotting to bite back. If not targeting Trump, her fangs could reach those close to him. People who know them both say Trump and Omarosa are very much alike.

“This president may have met his match,” Erin Burnett said Thursday night on Out Front on CNN.

Gone since only Tuesday night, Omarosa appeared on ABC’s Good Morning America Thursday to talk trash. It sounded as if she was pitching a tell-all book deal.

“I have seen things that made me uncomfortable, that have upset me, that have offended me, deeply and emotionally,” she told Michael Strahan. “And it has affected my community and my people… It is a profound story that I know the world will want to hear.”

(Hmmmmm. Interesting. Wonder if there’s anything Robert Mueller will want to hear?)

She was all over that network Thursday with updates. Ryan said White House brass was not pleased with Omarosa’s GMA appearance. Might she bite the man who fired her?

“She gives as good as she gets and so does this White House,” Ryan said. “And General Kelly doesn’t play.”

Kelly fired Omarosa in the Situation Room. Ryan reported that Omarosa responded by cursing and shouting and attempting to crash the White House living quarters to complain to Trump but was escorted from the building.

“She was very vulgar,” Ryan said. “She was cursing… It was very ugly. It was high drama.”

CNN’s Jeff Zeleny asked Press Secretary Sarah Sanders Thursday why Omarosa is still on the White House  payroll ($179,700 annually) until Jan. 20 if she no longer works there. Sanders dodged the question.

MSNBC also put the story in heavy rotation Thursday. Fox News Channel covered it far less, perhaps because it embarrasses Trump, who is protected by Fox and who seems to think that real life is a TV sur-reality show just like the film The Truman Show and that news is not fake only if it is on Fox.

On MSNBC, Chris Matthews said on Hardball, “She’s selling a book and it’s not going to be nice.” Yamiche Alcindor, a black reporter for The New York Times, told Matthews that Omarosa’s “co-workers really hated her.”

Matthews played an old video of Omarosa predicting that “every critic, every detractor, will have to bow down to President Trump” because “It is the ultimate revenge to become the most powerful man in the universe.”

But CNN had by far the most coverage. Ryan told Wolf Blitzer on The Situation Room that Omarosa would barge into the Oval Office without being invited to disrupt Trump.

“She could get in his ear some kind of way and then all of a sudden his whole mood would change and he would lash out,” said Ryan, who added that Omarosa disrupted White House business one day when she showed up with her wedding party of about 40 persons to take photographs without permission.

On networks other than Fox, several black reporters and political commentators said Omarosa—the highest and only black official in the White House—offended groups like the Congressional Black Caucus and the National Association of Black Journalists.

One African-American journalist, Jason Johnson of The Root, told Matthews that Omarosa “was loathed by black people and white people.” Conservative commentator Parris Dennard told Anderson Cooper on CNN that he was surprised to hear Omarosa hint that White House racial attitudes offended her because of her deep concern for “my community” and “my people.”

“The things that she was insinuating were very, very negative, very suspect,” he said. “I think it rubbed a lot of people the wrong way because we had never heard that.”

On Fox, Tucker Carlson played the story for laughs and chuckled about it with that cute lil’ Pee-Wee Herman feller who also works at Fox. Sean Hannity ignored the story (Mis-tah Trump would not be pleased!) and Laura Ingraham played her angle for a future “get” with the former director of communications of an obscure executive branch office.

“I like her,” Ingraham said. “She was nice to me…very charismatic person.”

Her guest was Sean Spicer, the former Trump press secretary who deftly dodged all questions about his former colleague. Ingraham mocked Zeleny’s question about Omarosa getting paid all those hard-earned taxpayer dollars for doing nothing. Carlson called Ryan a “left-wing radio reporter.”

Early in Trump’s administration, the large, loud, 71-year-old, orange-faced, yellow-haired demagogue insulted Ryan at a news conference with his ignorance of the Congressional Black Caucus. When she told him what it was, he asked her to set up a meeting with them for him as if she were the hired help.

Carlson showed a clip of Trump talking about Omarosa on The Apprentice.

“Omarosa has a huge chip on her shoulder,” Trump said. “She felt that she was superior to the other people.”

In a clip Carlson showed from GMA, Omarosa questioned Ryan’s reporting of her violent departure, asking “Where are the pictures and videos?” She seemed to imply that someone might have taken a cell phone picture or video if she caused such a fuss.

But Omarosa may have asked too much. If she really did trigger the alarm system at the residence, as CBS reported, there must be a surveillance camera that recorded it. In that she has demanded to see pictures, perhaps some of her dear former colleagues in the White House will sell such evidence to TMZ.

And wouldn’t that be the ultimate in “reality” television?

One of the best bits came when CNN gave the story the Jeanne Moos treatment at the end of Burnett’s 7 p.m. hour. Part of this report was a clip from GMA’s Robin Roberts—another black journalist—dismissing Omarosa with an Ice Cube line from the film Friday. 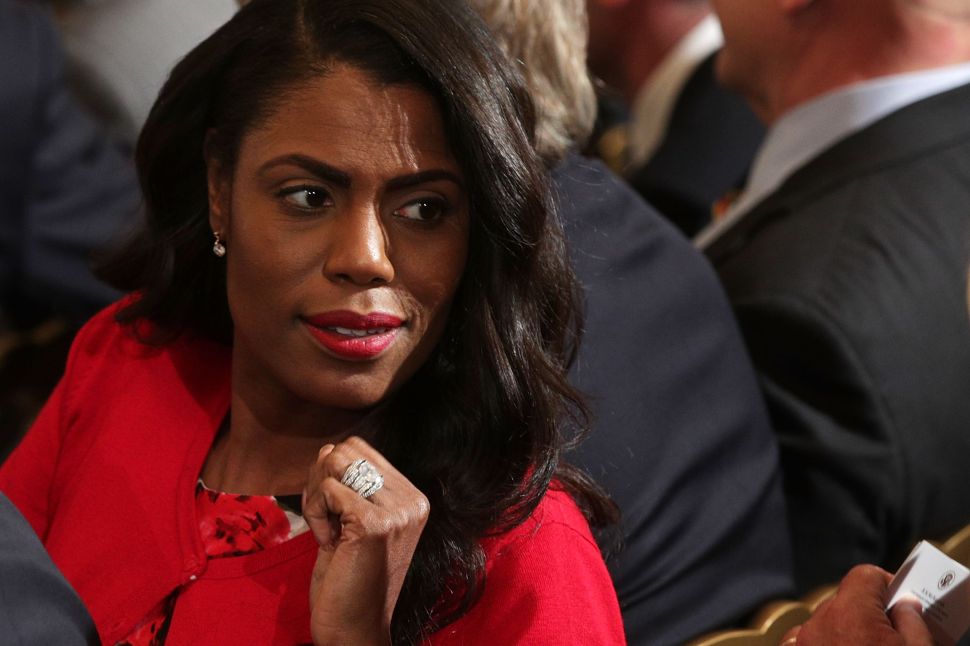