The United States has been the world’s greatest power since 1945, when that mantle—half-passed from London to Washington after the First World War—firmly landed in American hands after the Second World War. Since 1991, when the Cold War ended with Soviet collapse, America has been the world’s hegemon, to use the proper term, the force whose power could not be seriously challenged on the global stage.

For 26 years now—a happy generation—America has been able to do whatever it wanted, to anyone, at any time of our choosing, anywhere on earth. Notwithstanding the decline of major sectors of the American economy, our military has covered the globe with deployments as the Pentagon has divided our planet into “geographic combatant commands” to formalize our hegemony. Our allegedly deep defense thinkers have hailed this as our viceroys enacting Washington’s benevolent imperial will anywhere we desire.

It needs to be said that plenty of the planet has been happy to acquiesce in American hegemony. While we’re hardly the pure-hearted hegemon we imagine ourselves to be, the United States appears like a relatively positive force on the global stage, compared to other options. Even among skeptics regarding America’s global dominance, few pine instead for hegemony under, say, Beijing and its Communist party bosses.

Nevertheless, 2017 gave unmistakable signs that American hegemony, which has been waning for a decade, has now ended. A new age has dawned, even though it’s still early and the sun is far from full. As commander-in-chief, in his first year in the Oval Office, President Donald Trump has ranted and raved on Twitter almost daily, with no effect save to confuse our allies about what exactly is going on in Washington. De facto, America has two foreign and defense policies: what the president says and what our national security bureaucracy does. The gap between presidential rhetoric, much of it unhinged, and actual policy toward the world grew throughout 2017.

It’s no wonder, then, that North Korea seems anything but cowed, despite a year of Trumpian rants at Pyongyang. The Kim dynasty keeps rattling its nuclear saber at will, firing off missiles over the Pacific to showcase its power, and Washington’s demands that they cease have had no impact. While the Trump administration propagates the fantasy that North Korea will never become a nuclear power, that troublesome country has plainly had atomic weapons for years. That this unreality-based policy might end badly for everyone—even a merely conventional war on the Korean peninsula will mean millions of refugees and casualties—is obvious and constitutes one of the major what-ifs for the coming year.

The National Security Strategy recently rolled out by the White House with fanfare, however, appreciates none of these new geopolitical realities. It imagines a world where American power, while now confronted by Russia and a rising China, remains above fundamental challenge. Predictably, the president’s release of “his” NSS had barely any connection to the actual document. To be fair to Trump, the NSS always is a political write-up, not really any kind of strategy, and the relationship between its wish-list and actual Beltway policy is often tenuous; the current administration has decided to sever any NSS connection to reality altogether.

It should be noted that President Trump inherited a hegemon in decline. His predecessors did plenty of damage before the current Oval Office occupant decided to inflict more. Bill Clinton’s well-intentioned if often mishandled humanitarian interventions in the Balkans gave the illusion that America knew how to “nation build” broken societies at modest cost in lives and treasure.

We did not, as is demonstrated by the multi-decade debacles in the Greater Middle East initiated by George W. Bush in the aftermath of 9/11. In overreaction to jihadist terrorism, Washington decided to recreate that troubled region by, in effect, handing a broken Iraq to the mullahs in Tehran. The magical transformative powers of the U.S. military on foreign societies turned out to be as much a fantasy as the Bush experiment with mortgage loans for everyone. In a similar vein, the less said about our never-ending war in Afghanistan—which amounts to an effort to coercively make that country what it has never been, politically and socially—perhaps the better.

The loss of American prestige associated with the Iraqi and Afghan debacles is difficult to overstate. Plenty of the world was content to go along with American hegemony so long as it was somewhat competent. No fair-minded strategist, surveying what the Bush administration did in the Muslim heartland, could look at Washington’s defense and foreign policy elites, the architects of grand failures, with any comfort.

Not that Barack Obama made things better. Although he entered the White House with a mandate to undo the damage wrought by his predecessor, he mostly failed to do so. It’s difficult to not have sympathy for President Obama, who when he realized the extent of the Iraq horror he inherited, wanted to abandon the biggest failure in America’s history abroad. It’s less easy to excuse Obama’s missteps in Afghanistan, where a half-hearted “surge” failed to change any facts on the ground that really mattered.

Still, Obama’s biggest failures came elsewhere. His willingness to participate in the overthrow of the Gadhafi regime in Libya on dubious humanitarian grounds birthed violence and crisis graver than existed there in the first place. Worse, taking out the former rogue Gadhafi after he had abandoned his weapons of mass destruction and was cooperating with America’s war on terrorism, sent an indelible message that Washington’s word is no good—so never, ever give up your WMDs. Pyongyang, among others, watched and learned.

Then there’s Obama’s mishandling of Russia, with fateful consequences. His abandonment of his own “red line” in Syria in 2013 was easily read as a grave strategic error, since Obama in effect outsourced U.S. policy in the Middle East to Moscow—the results of which are painfully clear today. Obama’s reticence to do much about Vladimir Putin’s aggression in Ukraine a few months later is a matter of record, while his strange unwillingness to confront the Kremlin over its rancid spy-propaganda offensive against the West in 2015 undoubtedly encouraged aggressive Russian interference in America’s election the following year.

Putin and other malefactors got the message that Obama’s America would not stand up to troublemakers who could push back. Diffident messaging is never good for the hegemon’s reputation, especially when it’s already blighted due to incompetence and imperial overstretch. In 2017, in stark contrast, Donald Trump led the country in the opposite direction, with unceasing bluster about American strength and willingness to go it alone, anytime Washington wants to, damn the consequences.

Trump’s screw-the-world style in foreign affairs was on display this month with the White House’s decision to recognize Jerusalem as Israel’s capital. This pleased the Israeli right-wing and major donors to President Trump, yet in no way enhanced American power or prestige: quite the opposite. Reaction from the Muslim world was predictably furious, while the Trump administration made everything worse at the United Nations. There, Nikki Haley, our ambassador, publicly threatened members who didn’t vote with Washington against a UN resolution condemning our embassy move. This was American diplomacy at its most heavy-handed and tone-deaf, and it failed dismally. Virtually the whole world voted against Trump, with even most of NATO siding against Washington. This was a major diplomatic defeat for the alleged global hegemon.

President Trump is all about “strength” and he loves to tweet about our military, his own draft-dodging notwithstanding. In a sense, Trump is a perfect fit for our era, when all America has left is raw military power. Our economy has been in decline for decades, our divided society displays unmissable rot, and our politics are a partisan shamble in the aftermath of 2016. What America has left is its military, which is the ultimate underpinning of hegemony.

However, just how much military overmatch the Pentagon has left, after a near-generation of down-punching in the Middle East against fourth-rate foes without strategic success, is now America’s great imponderable. We have spent trillions of dollars on Iraq, Afghanistan, and killing jihadists all over, and the price in military obsolescence and declining morale is evident to anyone who wants to see.

Our Air Force, which hasn’t faced a serious peer competitor in the skies since the middle of the Second World War, is shedding pilots at an alarming rate, while it has far too few F-22 fighters to maintain air dominance worldwide, which Washington has taken as a given for decades. However, our Navy is in even worse shape, with a staggering number of admirals under a cloud for participation in an appalling corruption-cum-espionage scandal, while our fleet in 2017 demonstrated that it has lost grip on basic navigation at sea, with fatal results. Considering the U.S. Navy has been the guarantor of freedom of navigation on the world’s seas since 1945, the protector of international trade and the backbone of American hegemony, its sad decline has far-reaching consequences.

That said, our Army is equally unready for battle against a peer. In its shadow war in eastern Ukraine, Russia’s ground forces have demonstrated killing capabilities far beyond what America and NATO can do. The combination of Russian long-range artillery and electronic warfare has obliterated whole Ukrainian battalions, and right now they would do the same to the U.S. Army. Grave underinvestment in field artillery and electronic warfare hangs over our army. Russia has excelled at artillery for centuries, and that arm is the great killer on the modern battlefield. Armies that go into battle outgunned by the Russians historically get blasted off the field with heavy casualties. Right now, the U.S. Army is frantically playing catch-up so it can take on the Russians as equals if it comes to a fight

Our army’s opening performance has often been subpar, as demonstrated by defeats like Kasserine Pass and Task Force Smith. However, America always had time on our side to turn it around. We may not if the battlefield is in the Baltics, which the Russians may overrun in a couple days, before the U.S. Army has a chance to stop the invader. These are the scenarios that keep Pentagon planners up at night as we enter the new year.

Above all, Trump’s go-it-alone attitude is precisely the wrong take as American hegemony disappears. Some empires decline slowly, others fall fast after a major defeat; history is filled with both outcomes. Since 1945, Washington has presumed that it can deploy our military anywhere, at the time and place of our choosing, thanks to our dominance of the world’s skies and oceans. Even in a worst case, we could always get our forces home. This should no longer be assumed. The world has changed, American hegemony has collapsed, and if it’s not careful Washington may find out the hard way. Let’s hope cooler and wiser heads prevail in 2018. 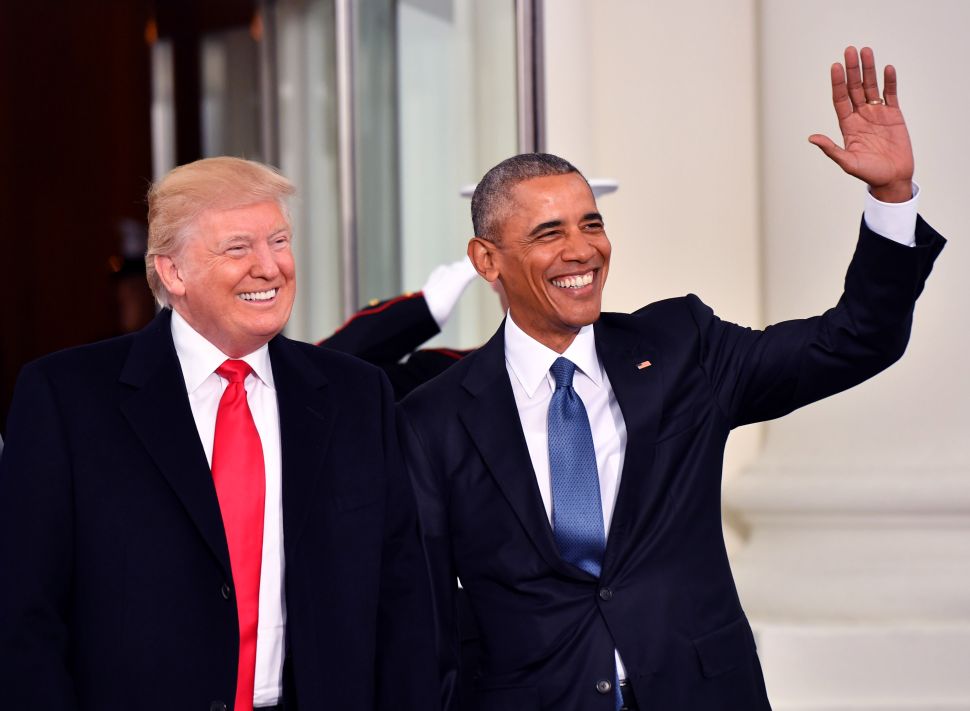