Here I am again, out on a limb with a saw in my hand. I’ve been here before, but never have I disagreed with quite so many colleagues (including a few I actually respect) about the same movie. But as the year draws to a close, I remain aghast at the way critics have not only embraced but slobbered over The Shape of .

This horror film masquerading as a fairy tale is about a mute woman who cleans toilets, scrubs floors and falls in love with a monster from beneath the sea. The pathetic girl is played by the wonderful British actress Sally Hawkins, who specializes in defective creatures herself. Earlier in 2017, in the far superior Maudie, she was quiet, somber, plain as limburger and physically crippled as a folk artist who triumphed over adversity.

In The Shape of , the damage is more mental than physical, although her face is in fact burned into scar tissue and she still has endless obstacles to overcome. Both she and the underwater monster who feature in this film are tortured outcasts, which inspires critics to rave about empathetic social injustice, survival in a cruel world, and poetic redemption. Alas, the more I try to find some kind of justifiable meaning and relevance, the more I find The Shape of a loopy, lunkheaded load of drivel. Not as stupid and pointless as that other critically overrated piece of junk Get Out, but determined to go down trying. I call this one Maudie Meets the Creature From the Black Lagoon.

Written and directed by the critic’s darling from Mexico Guillermo del Toro (Pan’s Labyrinth), he’s clearly enamored of fables, and his films struggle to be simultaneously terrifying and poignant. This one pulls out all the stops—old film clips of musical numbers starring Shirley Temple, Betty Grable, Alice Faye, the Glenn Miller Orchestra and Carmen Miranda abound. He builds parallel universes from the escapist movie lore of 1940s musicals into which a mute named Eliza (Hawkins in her most endearing repulsiveness) escapes from the real world of illness, factory labor, and the 1960s during the Cold War.

A gilled “Amphibian Man” (Doug Jones) that has been dredged up from a swamp in the Amazon by a greedy adventurer (Michael Shannon) is caged in a tank of an industrial prison lab where Eliza works the night shift cleaning urinals. The Amphibian Man is understandably menacing to anyone who comes near it, but Eliza, who empathizes with the misery of hatred and persecution, offers compassion and tenderness in the form of hard-boiled eggs. Romance blossoms. She is happy to be with him because he is non-judgmental. He is grateful for her kindness. But threatening the peculiar bond they form are many villains from Central Casting, including the Russians.

Knowing the unfortunate fish man faces extinction at the hands of the Kremlin, Eliza stages a rescue to the sound track of Carmen Miranda singing “Chica Chica Boom Chic” and with the help of a sympathetic co-worker (Octavia Spencer), smuggles the human red snapper out of the underground garage while a male military marching band plays “Shenandoah.” Hiding him in her apartment above a movie theatre that shows double-feature revivals of nothing but 20th Century-Fox movies, Eliza teaches the monster to eat with a knife and fork while she herself learns to dance around the dining room table singing “You’ll Never Know” from Hello, Frisco, Hello.

But just when you think it’s mercifully about to end, there is mass violence, a lot of people are gunned down in pools of blood, and the dead Eliza sinks to bottom of what is presumably the Hudson River to swim away in the fins of Aqua Man like Esther Williams on Vicodin. The question raised by The Shape of : A fish may love a girl, but where will they live? Write to them in Atlantis. The critics float away on clouds of ecstasy, in more ways than one. You know what I say. One man’s ecstasy is another man’s baloney.

Correction: An earlier version of this review misstated the name of the film’s director. The Shape of  was written and directed by Guillermo del Toro, not Benicio del Toro, an actor. 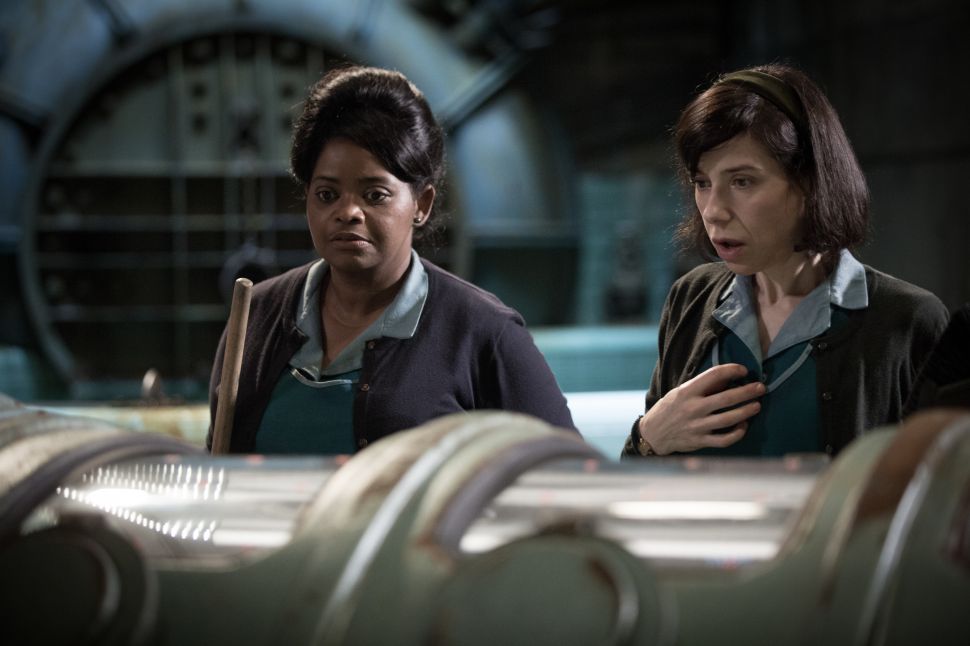